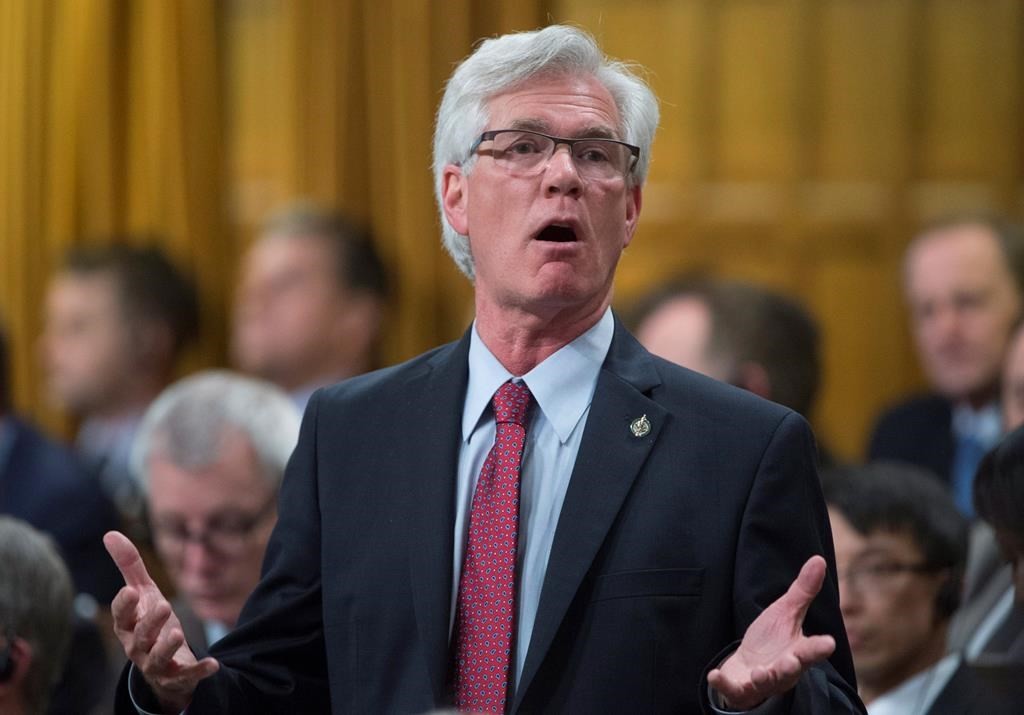 Natural Resources Minister Jim Carr speaks in the House of Commons in Ottawa. File photo by the Canadian Press.
Previous story
Next story

First Nations in British Columbia remain staunchly opposed to a proposed pipeline linking the province's north coast to Alberta's oilsands after the federal government and Northern Gateway announced they will not appeal a Federal Court of Appeal decision on the project.

Stewart Phillip, president of the Union of B.C. Indian Chiefs, said the two announcements Tuesday make no difference to First Nations that would be negatively impacted by the $7.9-billion project, which he described as being "on life support."

Shortly after Northern Gateway announced it would not appeal the court decision made in June, Natural Resources Minister Jim Carr said the government also has no plans to file an appeal.

Speaking outside the House of Commons, Carr reiterated the court's decision saying the previous Conservative government did not do its job to properly consult with aboriginal people.

"So we're not going to contradict the court's judgment in this case," Carr said, adding the government is considering its options, including the possibility of more consultations with First Nations. "The news today is that we will not appeal the decision because we agree with the conclusion that the Harper government did not do its job well enough."

Northern Gateway president John Carruthers said in a statement issued earlier Tuesday that meaningful consultation, not litigation, is the best path forward for a project he said would economically benefit First Nations and Metis, and includes 31 aboriginal equity partners.

"In order to encourage investment and economic development, Canadians need certainty that the government will fully and properly consult with our nations' indigenous communities," he said.

However, Phillip said that while consultation is a serious constitutional and legal undertaking, industry and governments have not made the financial investments needed to give it much weight.

"We're moving out of the era of consultation to consent-based decision making reality so I think this focus on adequate or inadequate consultation is somewhat behind the curve. I think the bar is much higher than consultation, regardless of quality and scope," Phillip said.

"The government of Canada, under Prime Minister (Justin) Trudeau, has committed to fully embrace the (United Nations) Declaration on the Rights of Indigenous Peoples, which is very much about free, prior and informed consent."

The Northern Gateway project by Calgary-based Enbridge (TSX:ENB) would include two pipelines, one carrying oilsands bitumen from Alberta to a port in Kitimat, B.C., and a second carrying condensate — a form of natural gas used to dilute the bitumen — from Kitimat back to Alberta.

Eight First Nations, four environmental groups and a labour union launched legal challenges against the approval, which were consolidated and heard by the Federal Court of Appeal last October.

The appeal court quashed approval of the pipeline, saying Ottawa neglected to discuss subjects of critical importance to First Nations by ignoring many of the project's impacts and offering only a "brief, hurried and inadequate opportunity for consultation."

The proposal, which has been in the works since 2005 and would require the construction of more than 1,100 kilometres of pipeline, first got the green light from the Canadian government in 2014. However, it has been mired in legal uncertainty ever since.

Residents of Kitimat objected to it in a non-binding plebiscite that year, but widespread opposition led the Union of B.C. Municipalities to pass a resolution against it back in 2010.

Art Sterritt, an elder and spokesman with the Gitga'at First Nation in Hartley Bay, said the company's continued promise of economic benefits from Northern Gateway are "ridiculous."

"People are being offered the opportunity to buy in on a pipeline. Anybody can buy in on any company," he said of the 31 aboriginal equity partners.

Most of them are in Alberta, and many already have pipelines running through their territories, Sterritt said.

Little consultation has occurred so far, but more talk won't mean First Nations will accept the pipeline they've rejected all along, he said, echoing Phillip's comments.

"They can come along and talk till they're blue in the face. The reality is this is an industry that will endanger everything that we stand for on the north coast."

Editor's note: a correction to the teaser of this story was made at 11:45 a.m. on Tues. Sept. 20, 2016. The original version said Enbridge was officially dead. That was incorrect.