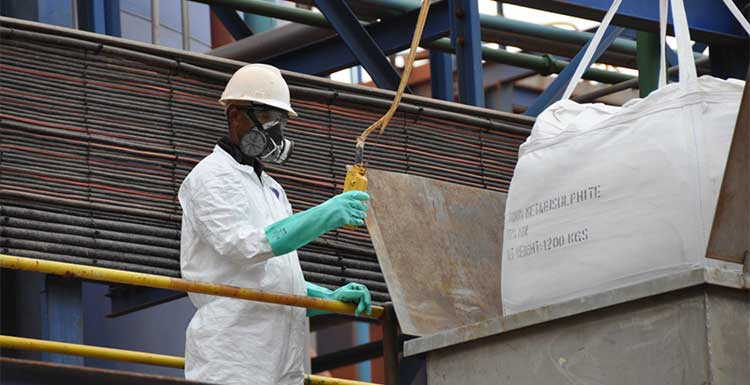 A worker at the Bisha Mine in Eritrea. File photo courtesy of Nevsun Resources.
Previous story
Next story

In a historic legal first, foreign workers who have accused a Vancouver−based company of using slavery at an African mine will have their case heard in the Canadian court system.

In a judgment released Thursday, the Supreme Court of British Columbia gave the go−ahead for three refugees to proceed with a civil lawsuit against Nevsun Resources, which owns a controlling interest in the Bisha gold mine in the small East African country of Eritrea.

Joe Fiorante, one of the lawyers representing the group, said this is the first time foreign claimants have been able to file a lawsuit in Canada against a Canadian company over allegations of human rights abuses that took place abroad. The lawsuit, filed in November 2014, alleges that Nevsun engaged Eritrean state-run contractors and the Eritrean military to build the mine's facilities, and that the military used forced labour — slavery — to complete the job.

A big victory for the plaintiffs

"From the plaintiffs’ perspective, it is a big victory," said Fiorante in an interview. "For us, this is a green light to proceed with the case on the merits, and this will give our clients the chance to pursue the allegations in court and a chance to vindicate their rights."

None of the allegations has been proven in court, and Nevsun did not immediately respond to a request for comment. Earlier in the day, the company issued a statement saying it’s studying the decision and is considering filing an appeal.

"The judgment makes no findings with respect to the plaintiffs’ allegations, including whether any of them were in fact at the Bisha Mine," the statement reads.

The Vancouver-based company said it is confident that its subsidiary operates the mine according to international standards of governance, workplace conditions, health, safety and human rights.

The judgment dismissed the workers’ application to have their allegations heard as a single case, and instructed them instead to file three separate claims. Fiorante called that element of the ruling "surmountable," adding that his legal team plans on filing dozens more claims from other former mine employees.

Working under threat of torture

The three men involved in the original case, Gize Araya, Kesete Fshazion and Mihretab Tekle, have since fled Eritrea, though none are in Canada, Fiorante said. He added that the plan is for them to be in the country by the time the case goes to trial, which could take several years.

The original notice of claim filed with the court almost two years ago contends Nevsun entered into a commercial relationship with Eritrea, a repressive, one−party state bordered by Sudan, Ethiopia, and Djibouti, with a history of severe human rights abuses.

"During the period of forced labour at Bisha, the plaintiffs were subjected to cruel, inhuman and degrading treatment as well as harsh working conditions including long hours, malnutrition and forced confinement for little pay," the document alleges. "They worked under the constant threat of physical punishment, torture and imprisonment."

The document alleges Nevsun was aware or must have been aware — by the time construction began at the mine in 2008 — of credible, published reports of the abuses, and by entering into the relationship, Nevsun allegedly facilitated forced labour, crimes against humanity and other abuses of human rights.

On Thursday, the B.C. Supreme Court Justice Patrice Abrioux rejected Nevsun’s position that the case should be dismissed in Canada and instead heard in Eritrea, on the grounds that there is "sufficient cogent evidence" supporting the theory that the refugees would not receive justice there.

Araya, Fshazion and Tekle are being represented in court by Vancouver law firm Camp Fiorante Matthews Mogerman, Ontario law firm Siskinds LLP, Toronto lawyer James Yap, and the Canadian Centre for International Justice (CCIJ). Now that the legal process has begun, they will not be able to return to Eritrea, where Matt Eisenbrandt, legal director for CCIJ, said they would be considered "traitors" by the government.

"The fact that the plaintiffs can’t go back to Eritrea is an essential issue in why this case needs to proceed in Canada," he told National Observer. "My organization also believes strongly, that when there are Canadian companies alleged to be involved in serious abuses in overseas operations, they should be judged in Canadian courts."

If the plaintiffs are successful in their lawsuit, he added, it could have an impact on how other large mining companies hold themselves accountable for activities that take place overseas.

"If this case were to succeed, in trying to impose direct liability on Nevsun for its duties to the people who worked at its mine, that certainly could have an effect on other companies," said Eisenbrandt.

"Part of what this lawsuit is trying to achieve is to say that when companies take on these obligations, they have a responsibility to follow through and make sure that human rights standards are, in fact, being observed and practiced at their mines."

By Elizabeth McSheffrey | News, Energy | May 2nd 2016
Race to a Safer World