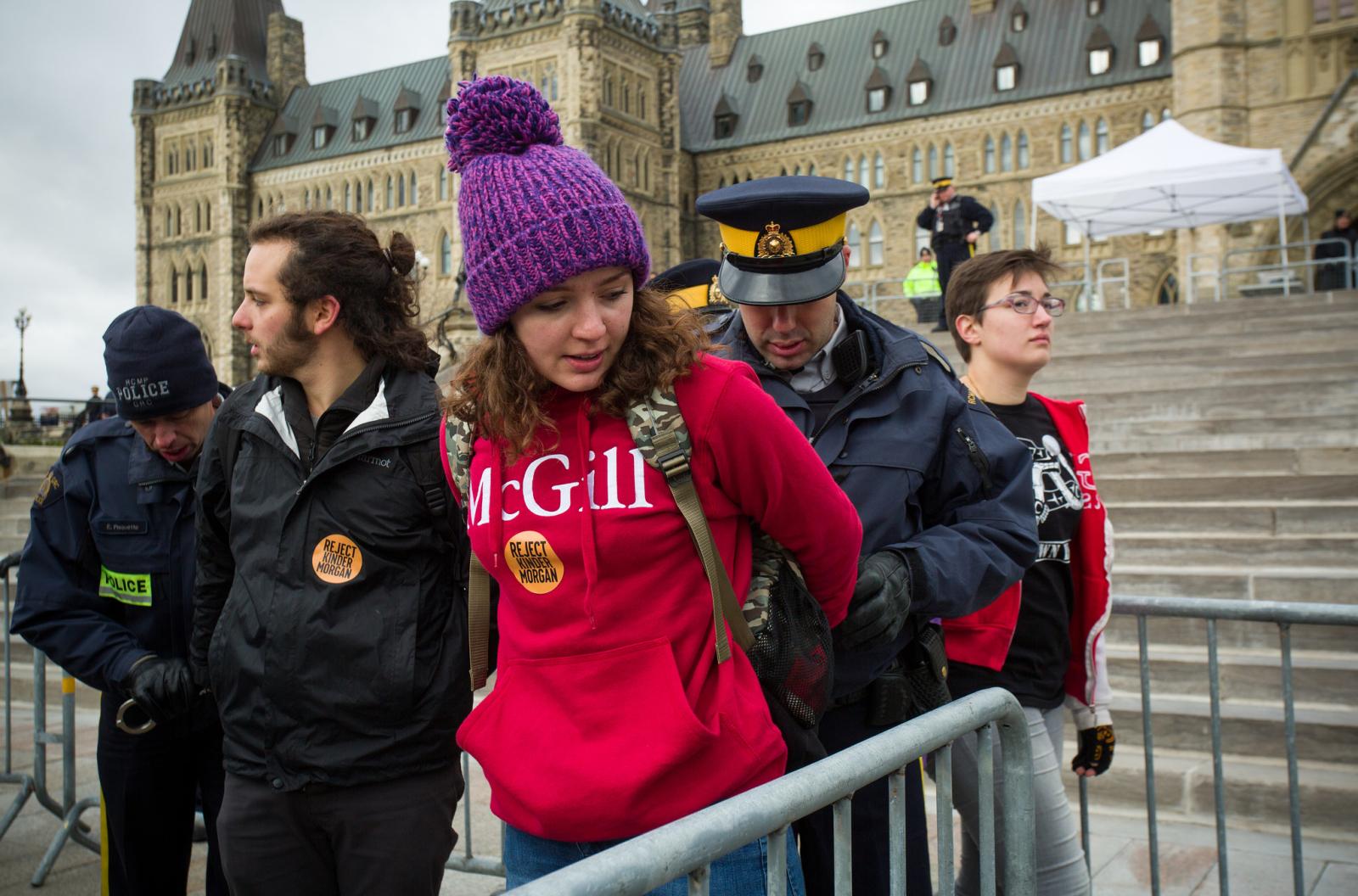 A student is arrested on Parliament Hill while protesting the Kinder Morgan Trans Mountain expansion on Mon. Oct. 24, 2016. Photo by Robert van Waarden of Survival Media.
Previous story
Next story

Ninety-nine young environmental activists achieved their goal on Parliament Hill on Monday by carrying out acts of civil disobedience. The boisterous group climbed over restricted-area police barricades near the Peace Tower.

Protesting the possible construction of the Alberta to B.C. Kinder Morgan Trans Mountain pipeline, the 99 were arrested and taken to a police station. They were issued citations and told not to appear on Parliament Hill for three months.

None of those arrested saw the dark and damp insides of a jail cell. They will not have criminal records.

Protest spokeswoman Amanda Harvey-Sanchez, a third-year University of Toronto student, told media that pipeline approvals are a deal-breaker for many younger voters who helped propel the Trudeau Liberals to a majority government in last October’s general election.

Fully intent on breaking the law, most of the 200 protestors on the Hill had been schooled in what they should and should not do during their law-breaking task. Called Climate101, the protest was specifically for young people. It was organized by 350.org, one of the groups leading the fight against climate change.

Facing protesters on Parliament Hill is a routine activity for police – some 25,000 people were on the Hill a year ago to oppose climate change.

But, for most of those arrested, Monday’s experience was their first brush with the law. When police officers placed a hand on their shoulder, there is no doubt their stomachs were churning.

However, it’s likely that many of those arrested will be ready to take part in future aggressive actions to protect the environment and slow climate change.

They’re angry that the battle to slow global warming is being lost.

First of all, the environmentalists do not trust the Trudeau government to do the right thing and stop approving fossil fuel related projects. A go-ahead for Kinder Morgan is their biggest fear.

Secondly, the World Meteorological Organization announced Monday that the globally averaged concentration of carbon dioxide in the atmosphere reached the symbolic and significant milestone of 400 parts per million for the first time in 2015 and surged again to new records in 2016.

As conditions worsen, civil disobedience is a growing response to the lack of government action on climate change and the full-speed-ahead attitude of the fossil fuel industry.

Elsewhere in Ottawa, at the Human Rights Monument, three members of a group of natives from Newfoundland and Labrador were refusing to eat solid food. The community near Muskrat Falls fears that a hydro-electric plant will ruin their lives.

They believe the planned flooding in connection with the plant could contaminate water with methylmercury, poisoning fish and game. They are trying to pressure Prime Minister Trudeau to step in and solve the problem. Back in Labrador, about 50 people, including some who travelled to Ottawa, have been preventing workers from gaining normal access to the site.

In the U.S. earlier this month a group calling itself Climate Direct Action broke into four pipeline sites and disrupted five major pipelines carrying Canadian crude to various American states. Basically thumbing their noses at authorities, the radicals posted photos and video that show how they closed down the lines. The sites belonged to Enbridge, TransCanada Corp., Kinder Morgan and Spectra Energy Corp.

A need for civil disobedience

Many Canadian environmental leaders do not yet agree that civil disobedience is a necessary weapon to have it their toolkit, but John Bennett isn’t one of them.

“Civil disobedience is breaking an unjust law or breaking a law to draw attention to an unjust law,” Bennett said in 2013 when he was with Sierra Club Canada. “It has played a major role in creating democracy around the world. We shouldn’t forget that ever.” He’s now with Friends of the Earth.

“There is an ideology ruling this country seeking to profit from our natural resources without taking responsibility for climatic catastrophe that awaits our children,” said Bennet, who first broke the law more than 30 years ago for a worthwhile cause. “When (authority) is opposed using the law, it changes the law. When it is presented with evidence, it turns a blind eye and approves the next oil project.”

Many of the young folks who so proudly broke the law in Ottawa Monday will heed the words of John Bennett and likely go on to use civil disobedience to fight unjust laws.

Nick Fillmore is a Toronto freelance journalist and social activist and a frequent contributor to the National Observer. He recently joined a small Toronto environmental group, Climate Action NOW. You can visit his blog at: nickfillmore.blogspot.com

Bravo to these young people

Bravo to these young people for 'putting themselves at risk of arrest' for the greater good of slowing down the rate of climate chaos. It is not just their future they are fighting for, this action is for all of us. I continue to find it interesting that 'climbing over police barricades' is an arrestable action, yet putting human civilization at risk is not. Every day there are well-paid Fossil Fuel lobbyists attempting to influence our elected representatives to do just this. This is not only a 'legal activity' but it is tax deductible for Industry Corporations. Once we have voted our voices mean little, compared to the daily, ongoing influence of this Industry. Perhaps we should have a shift in the language we use to describe what is happening. Perhaps instead of calling the students 'protesters', we could call them student activist lobbyists (unpaid) and perhaps we could call the individuals who were a part of Climate Direct Action 'concerned citizens' rather than 'radicals'. Just a thought. Thanks for the article.

They are brave young people

They are brave young people and I like the idea that they should be called activist lobbyists.