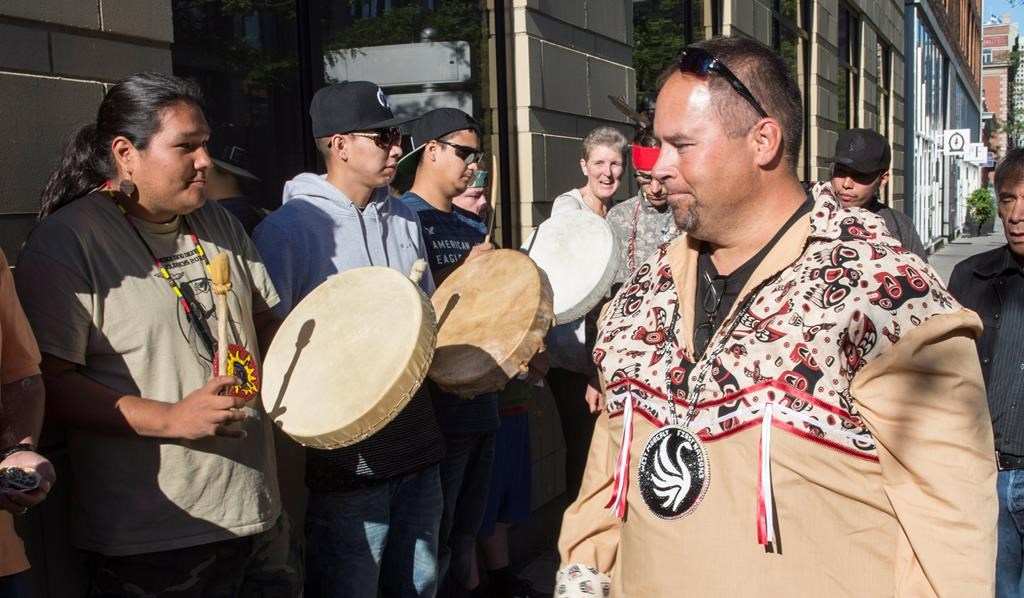 First Nations advocates fighting the Site C Dam are welcomed in Montreal on Sept. 12, 2016 as they fight the Site C Dam impacting their territories in northwestern B.C. Photo by Canadian Press.
Previous story
Next story

Canada's Justice Department has asked an elected federal politician to wait up to 960 days before it gives him information about the decision to grant permits for a controversial British Columbia hydroelectric project.

The BC government supports Site C, but some of the project’s detractors have questioned whether the development makes economic sense.

New Democratic Party MP Charlie Angus told National Observer in an interview that he believes the government has a duty to release all information about those permits, including potential implications for treaty rights. The federal Liberals had previously agreed to make this type of information public when they accepted recommendations from a federal panel, the Truth and Reconciliation Commission, that was investigating how Canada mistreated First Nations people in residential schools.

The Federal Fisheries and Oceans Department issued the permits, normally required for industrial development that affects bodies of water, and would have likely consulted with federal lawyers in the Justice Department regarding potential impacts on treaties with First Nations.

With little information available about why the federal government announced it was issuing the fisheries permits on July 29 before a long weekend last summer, Angus filed a formal request for answers through Canada's access to information legislation, which requires the government to respond within 30 days.

The Justice Department told Angus that it would need an extra 960-days, which would mean that the information might not be available until 2019, around the time of the next federal election.

"The Justice Department has just given us a stone wall (saying) we will perhaps let you see behind the wall in 960 days," Angus told National Observer. "They need to justify this. Why are they creating a protective wall?"

The department was not immediately able to respond to questions from National Observer about its requested delay.

While Canada's access to information laws allow for extensions in exceptional circumstances, Angus said the delay in this case was "troubling" and he has written to Parliament's information commissioner, Suzanne Legault, asking her to investigate.

"The Environment Minister (Catherine McKenna) has stated this project has not met the level of consultation that should be had and the Justice Minister (Jody Wilson-Raybould) has stated that projects like Site C cannot be allowed to run roughshod over Aboriginal Title and Rights," Angus wrote in a letter to the information czar, dated November 15 and reviewed by National Observer. "Nevertheless, without any explanation the permits were approved by this government on the Friday afternoon of a summer long weekend. And since then the government has been doing everything it can to refuse to explain this decision to Canadians."

The Truth and Reconciliation Commission made dozens of recommendations to repair the damage caused by Canada's infamous residential schools, which existed from the 1840s until the 1990s, separating aboriginal children from their families in an attempt to eradicate their culture and assimilate them into mainstream Canada. One of those recommendations, accepted by the federal Liberals, was "to develop a policy of transparency by publishing legal opinions it develops and upon which it acts or intends to act, in regard to the scope and extent of Aboriginal and Treaty rights."

Angus said that the government now needs to honour this commitment made by Trudeau's Liberals.

"The justice minister has the legal obligation to ensure that on an issue like Site C, that the government makes sure that treaty rights were protected and the duty to consult was carried out," Angus told National Observer.

The access to information request from Angus asked for "All communications, correspondence, documents and briefings, including but not limited to messages both internal and external from the Department of Justice Canada relating to the permits that were recently approved for the Site C dam on July 29, 2016, including those related to the Environmental Assessment decision of November 2014 to the extent that they were considered in the permitting process."

Very convenient for justice minister. Dept. refuses to turn over #sitec docs for 960 days. By then she will be safely on road to re-election

Although a request of that nature may consist of thousands of internal emails, Angus questioned whether the department was processing the file in good faith since it never contacted his office to attempt to narrow down the scope of his request, or propose alternative solutions to speed up the response.

"The issue is very troubling on a couple of fronts because the minister also has a legal duty to follow the Access to Information Act and a delay of 960 days can't be seen as anything other than obstruction on a very sensitive political file."

Thanks. Mike. You do

Thanks. Mike. You do terrific reporting.

Phoney/False Pretences
The current Justice Minister Jody Wilson-Raybould was elected partially under False Pretences, in that before the last Federal election, she was outspoken in her belief that the then-current Government was running roughshod over the concerns of the First Nations most affected by the Site C Dam. Now that she is Enshrined near the top of the current Government, she has absolutely nothing at all to say about the way the current Government is running roughshod over the very same First Nations. Something is very Phoney/False here, wish I'd known she was going to pull a 180 on us BEFORE I helped vote Harper out.

In other words, they are

In other words, they are saying they will finish the monstrosity, destroy the whole area, and ensure BC is indentured to BC Hydro for generations to pay this debt that was actually yet another "gift" to O & G multinationals from taxpayers, before the GOC will release the documents showing there was zilch going for the plan but because of the parties involved it got the rubber stamp. A year into this transparent, open, science based decision making government and the secrecy is worse than the last regime's, scientists are still gagged and their work is ignored.

The Trudeau government is

The Trudeau government is paralleling the Harper regime’s strategy of suppressing the media, plus their closing of Environmental Research Libraries across Canada. It is quite obvious they are another Corporatist party. Quite a letdown from the prime ministers pre-election phrase, “sunny day’s ahead”, I question, did he mean for the corporate sector with no regard for peoples health, safety, wellbeing and traditional lively hoods.

Site C Dam’s structural integrity is at risk from the nearby fracking of natural gas. Breaking up of the earths fragile crust to extract natural gas and oil is suicidal at best driven by selfish greed. There is a power dam in Ontario with a flume gate that will not open because the earth has shifted squeezing the gate. Are not river valleys likely over faults in the earth. Is there not a Quake Zone SW of Williams Lake?

Ref: Known risk of earthquakes caused by oil and gas development, BC ...
www.ernstversusencana.ca/known-risk-of-earthquakes-caused-by-oil-an...
Aug 16, 2016 - BC Hydro officials worry about risks of earthquakes triggered by ... Fracking behind human-caused earthquakes in B.C., Alberta: study ..... to the Peace Canyon Dam in northern British Columbia might cause the dam to fail.

Good for Charlie Angus! His

Good for Charlie Angus! His actions represent the honorable intentions of the NDP, to check out the government for transparency, fair to First Nations, and other serious concerns with the Site C -- electricity not needed, terrifically expensive (will saddle ratepayers and taxpayers for generations), destructive of class 1 and 2 agricultural land, will poison the fish with methyl mercury making unusable by First Generations for generation or more, etc etc. So Trudeau gave in to Liberal Premier Clark's desires, and decided to flood the Peace with a third dam. He, and his Ministers of Fisheries and Environment, gave permission to continue the travesty of destruction and pollution to the Peace, and unjust displacement of the First Nations and Peace Valley farmers. Keep up the demand Charlie, we will remember your good NDP actions, against the young fellow who cannot keep his promises.