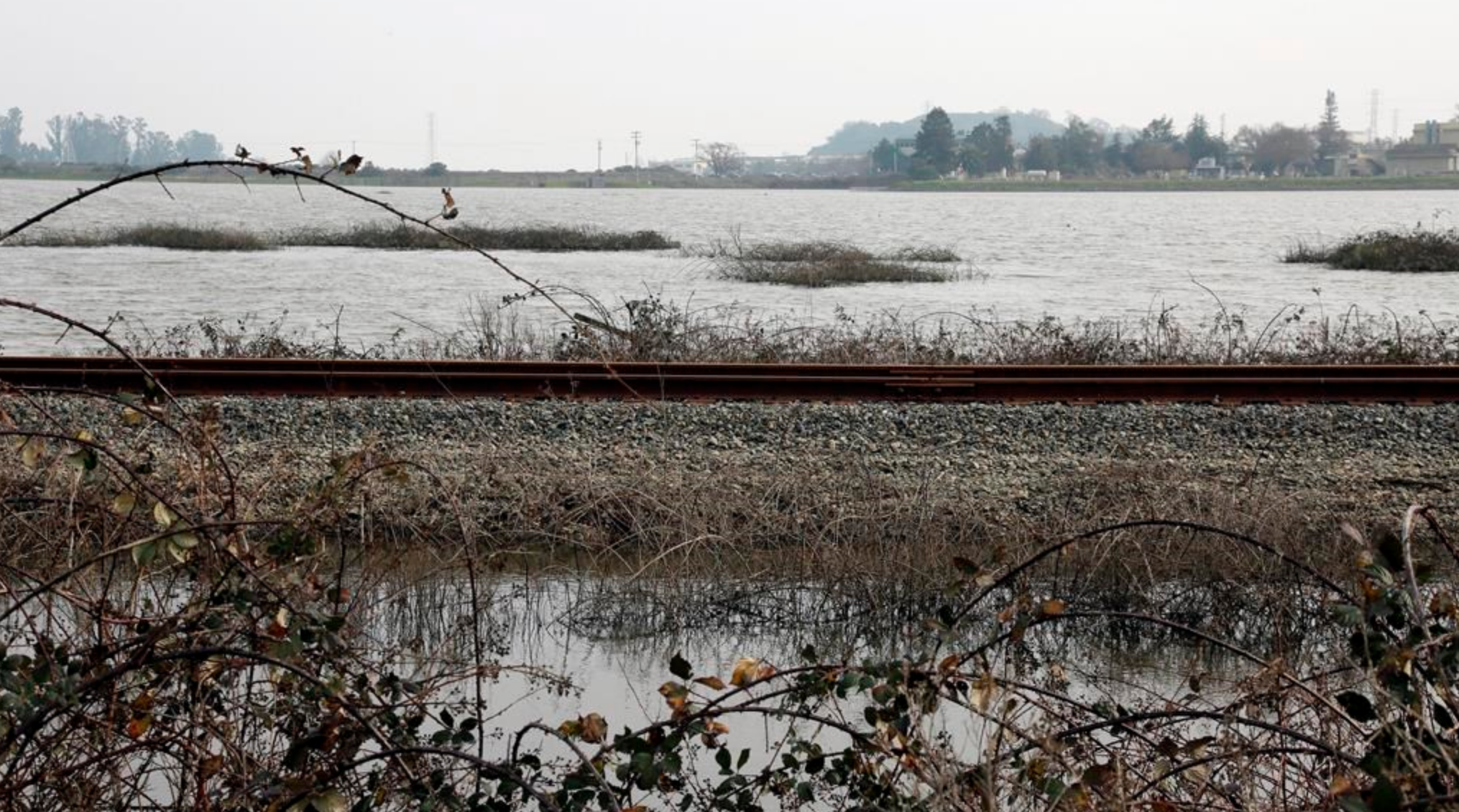 Ocean rise already is worsening the floods and high tides sweeping California this stormy winter, climate experts say, and this month’s damage and deaths highlight that even a state known as a global leader in fighting climate change has yet to tackle some of the hardest work of dealing with it.

The critical steps yet to come include starting to decide which low−lying cities, airports and highways, along with threatened landmarks like San Francisco’s Embarcadero, to hoist above the rising water and which to abandon — and where to start getting the many billions of dollars for those climate rescues.

"People always tell us we’re ahead of the curve" on climate change, said Larry Goldzband, head of a regional San Francisco Bay commission that late last year stepped up regional efforts to identify and prioritize communities and infrastructure at risk from rising sea level. As proud as Californians are of their climate−change efforts, "I always think, ’Man, if we are ahead of the curve, I feel sorry for the rest of the country,’" Goldzband said.

A 2009 study by the Pacific Institute, a California−based environment think−tank, estimated $100 billion in property was at risk from ocean rise in California, two−thirds of it in the low−lying San Francisco Bay region. That’s far more than the state takes in from income taxes each year.

Experts say the real cost of raising, shielding or evacuating vulnerable spots, which include mass−transit systems, power plants and sewage plants, could be far higher.

"Astronomical. The San Francisco airport? What would it cost to replace that?" asked Gary Griggs, director of the Institute of Marine Sciences at the University of California, Santa Cruz.

Griggs is part of a scientific working group requested by Gov. Jerry Brown to examine whether new evidence on melting and potential ice−sheet collapse in the Antarctic, whose ice holds almost 90 per cent of the Earth’s fresh water, means sea−level rise may be even higher than the 3 feet projected for California by the end of the century.

The Pacific off California has risen just about 8 inches overall in the past century. For the next three decades or so, the accelerating pace of sea rise primarily will make worse the flooding and erosion from big storms like this month’s in California.

"Probably until mid−century, short−term events ... are going to be more damaging than sea−level rise itself," Griggs said.

In January, a series of powerful storms brought more than a foot of rain to parts of the San Francisco Bay, triggered record 34−foot waves off the state’s central coast, killed at least five people and prompted the evacuations of thousands around the state.

The dead included a cab driver who slid off a wet road and into a swollen estuary off Oakland’s airport, which along with San Francisco’s bayside airport is one of the big sites expected to be hit more and more often by flooding as the Pacific Ocean rises a foot over the next 30 years.

Brown, who declared an emergency in much of the state this month because of flooded towns and highways, crumbled roads and rockslides, has vowed to fight if the fossil−fuel friendly Trump administration goes after California’s landmark programs to reduce climate−changing carbon emissions. Brown’s administration in 2015 also sought to speed up planning for dealing with sea rise and other climate change.

On a sparkling afternoon after three storms brought some of the heaviest rain and surf to California in decades, ecologist Fraser Shilling stood on a highway bridge north of San Francisco, looking over sprawling miles of floodwater and salty bay water swallowing the highway’s exit ramp, and drowning salt marshes and fence posts as far as the eye could see.

State Route 37 is a busy highway for tens of thousands of commuters and truckers in and out of California’s wine country. Shilling, a co−director of the Road Ecology Center at the University of California, Davis, had forecast it wouldn’t be seeing this kind of regular high water for at least another 20 years.

"This is the new normal," says Shilling, who believes sea rise already is changing conditions on the ground more than some state agencies realize. "And all of our infrastructure is not accommodating the new normal."

Pumps and bulldozers laboured to clear water from another stretch of the state highway, two weeks after the storms. State and local governments acknowledge that low−lying sites like State Route 37 will be hit by sea−rise worsened floods and tides more and more, before the bay claims them completely.

But authorities are stymied by the financial and political difficulties of raising billions to elevate or protect the highway, or reroute it through pricey vineyards inland. As it is now, substantial state funding isn’t expected for this particular highway until 2088, long after parts of it are expected to be regularly submerged.

"Our biggest challenge is how to fund and build it before it goes underwater," said Kate Miller, executive director of the transportation authority for Napa County.

California might not really start funding its rescues from sea rise until a major part of the public is inconvenienced, said state Sen. Jerry Hill, a Democrat from San Mateo County.

Hill’s prediction of what would free the funds: If a low−lying stretch of U.S. Highway 101 near San Francisco’s old Candlestick Park floods, and much of the Bay Area suddenly could not get to work.

"That will be the wake−up call, when the rubber hits the road," he said. "When the water hits the tailpipe."