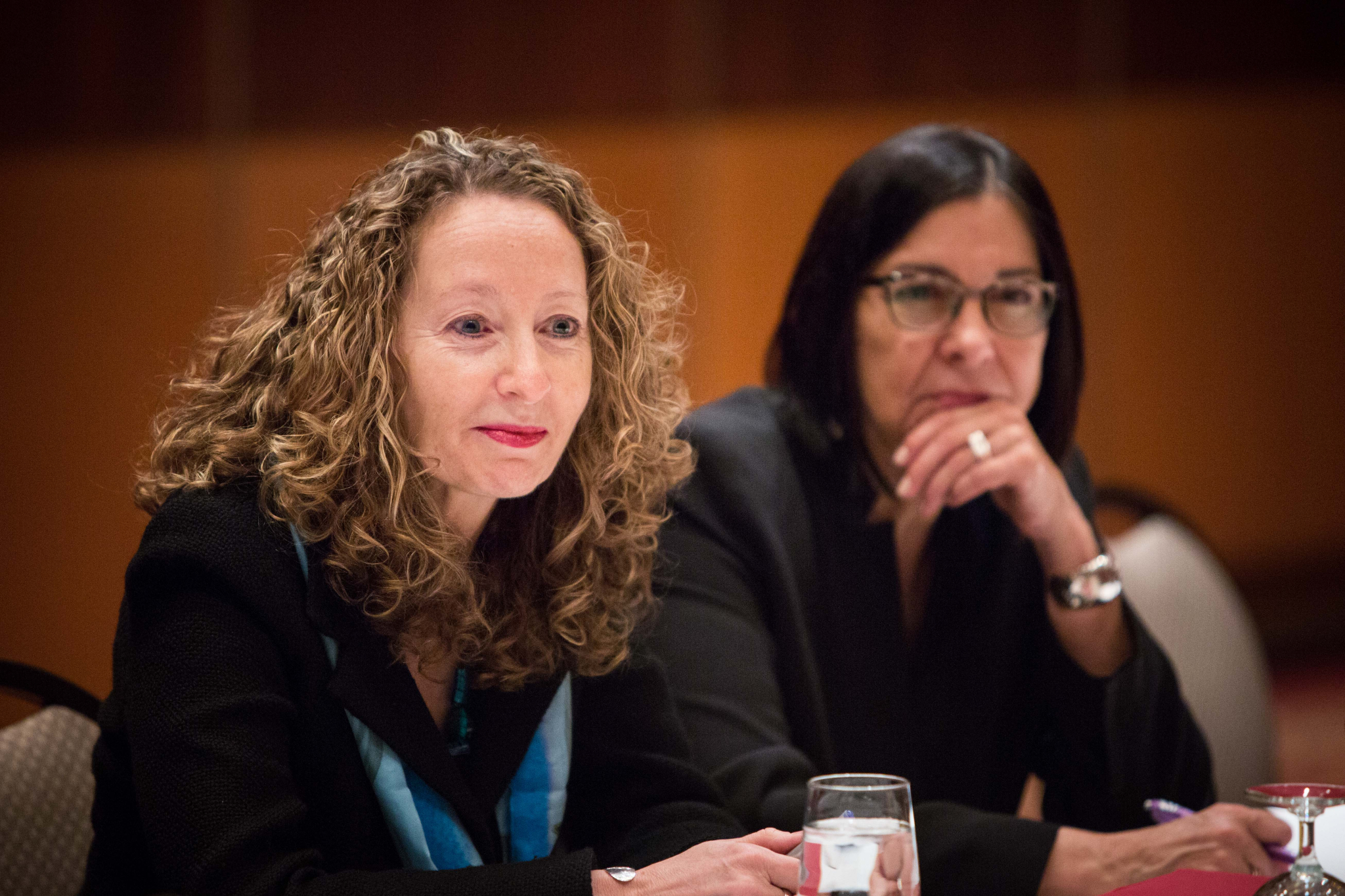 Hélène Lauzon, left, and Wendy Grant-John, right, members of a panel appointed by the federal government to review the NEB, speak to National Observer on Feb. 22, 2017 in Gatineau. Photo by Alex Tétreault
Previous story
Next story

It didn't take long for a federal panel of experts to figure out that Canada's pipeline regulator has a credibility problem that needs to be fixed.

The panel, appointed by the Trudeau government in 2016 as part of a comprehensive review of Canada's environmental laws and federal oversight of industrial development, has just started touring the country to get ideas about how to "modernize" the National Energy Board — an election campaign promise made by Prime Minister Justin Trudeau's Liberals as part of efforts to restore public trust in federal oversight of industry.

In a wide-ranging editorial board meeting with National Observer in Gatineau, Qué., members of the newly-formed panel said they've already heard from a number of Canadians who say they don't trust the NEB. A clear problem is the location of the energy regulator's head office in Calgary, in close proximity to the headquarters of Canada's largest oil and gas companies.

“This is something we have identified in terms of what we’ve heard," said the panel's co-chair Hélène Lauzon, a lawyer who presides over the Quebec Business Council on the Environment. "The perception is that because the head office is in Calgary, this is one of the reasons people believe it’s too close to the industry. We’ve heard the word ‘captured’ by the industry. So this is something we’re hearing and this is something which could be improved in terms of having more representation from all other stakeholders.”

Members of the public who have signed up to participate in the panel's review have made a series of complaints about how the NEB does business, how it deals with First Nations, and the shortcomings of its environmental reviews of new energy industry projects.

The Trudeau government has been criticized by its political rivals for spending public money on consultations on controversial issues and then ignoring recommendations or abandoning key promises. But the NEB modernization experts say they are already discussing the feedback from the public and trust that the government is serious about solving a critical problem.

"There is no government of any political stripe that has not recently been troubled by the undermining of public trust on public institutions in general and on the ability to make decisions around energy and related environmental interests on energy projects in particular," said Brenda Kenny, an engineer on the panel who has worked in management at both the NEB as well as with a pipeline industry lobby group.

The expert panelists said they were also interested to hear from a former Progressive Conservative cabinet minister on the topic. Then prime minister Brian Mulroney's government moved the NEB offices from Ottawa to Calgary in 1991. Former energy minister Bill McKnight told the panel members that he supported the move at the time because he thought it would bring the regulator close to more expertise from the oil and gas industry.

But after watching it in recent years, McKnight had changed his mind because of the public perception of credibility problems, said Wendy Grant-John, a former Musqueam chief who is on the five-member panel.

“So it was pretty interesting to me to hear him say that — after watching it — probably it wasn't the best thing for the idea of it being an independent body," she said.

The pledge by the Liberals to modernize the energy regulator also included a plan to ensure more diversity among its board members from regions outside of Calgary and as well as representation from indigenous people.

All of this comes at a time when the NEB has been plagued by controversies over a series of conflict of interest allegations, internal survey results showing that employees don't trust management, and a scandal, uncovered last summer by National Observer, that forced chief executive Peter Watson, and three other board members to recuse themselves from a review of a major pipeline project over allegations that they appeared to be biased.

Open to indigenous knowledge and rights

Grant-John didn't mince words about some of the shortcomings of federal oversight of industry when it comes to relations with First Nations.

"The idea that really what we want, as indigenous people, is to engage at the beginning, recognize what we say our traditional territory is, what those values are within that and incorporate that into the final decision and continue the relationship after," she said, "Not just come in and talk for a few minutes and (be) gone, which is how it’s been previously — tick the box and say that we’ve done that now."

After speaking with Wilton Littlechild, a Cree lawyer and former MP who helped draft the United Nations Declaration on the Rights of Indigenous Peoples, Grant-John said she was pleased to see that there is openness from her fellow panel members and the government to improve how it incorporates indigenous knowledge and rights into industrial development.

"So I’m really impressed with the ability of my fellow panel members to really open up their mind to what the indigenous people are saying and try to understand where there is a misunderstanding about what our lives are about with regards to the land, water and air," Grant-John said. "So that really is encouraging to see that there is, not just from the panel members, but from the government. As you know, the prime minister says it’s the most important relationship he has. And I think that that’s being reflected in the openness that’s being presented now, not just by the participants, but by the panel members and the staff, the secretariat, are very open to expanding and finding out more and more, in order to represent what the indigenous people are saying.”

The expert panel members said that some indigenous participants have spoken about their belief that they should have the right to veto projects, but Grant-John said it was also about building deeper relationships.

"I think there’s a greater understanding on the indigenous side on what (the United Nations Declaration on the Rights of Indigenous Peoples) means and what (Free, Prior and Informed Consent) means, and that is a traditional way of looking at how we relate to one another and how we need to work together for the betterment of the environment, for the betterment of the world that we live in. And I think that’s what we’re hearing more than saying ‘no.’ Of course there’s going to be a few for sure, but I think there’s a real depth of understanding from the indigenous communities of what that actually represents, and that’s the whole life cycle."

The panel members said they have also heard calls from people who want to stop the NEB from doing environmental assessments or reviews on new projects and turning this responsibility entirely over to the Canadian Environmental Assessment Agency.

Panel member David Besner, a former provincial government senior official who is now president of the New Brunswick Energy Institute, also recognized that many Canadians expressed frustrations about the lack of transparency during NEB reviews, which restricted participants from being able to press energy companies about their claims and projections.

“I think that a large item in transparency that we’ve heard fairly consistency throughout is the lack of ability even for those with standing in a hearing, to — I hate to use the word cross-examine — to question the proponent’s data and science," Besner said. "That is apparently not permitted and that’s an issue that’s raised quite often.”

Natural Resources Canada, which is providing administrative support for the panel's work, said that the panel's other co-chair, Gary Merasty, could not attend the meeting with National Observer on Wednesday for personal reasons.

After wrapping up its consultations in March, the panel has until May 15 to submit its final report. The Trudeau government could then use the recommendations to draft legislation to modernize the NEB.

with files from Elizabeth McSheffrey and Riley Sparks

Editor's note: This article was updated at 8:30 pm ET with additional detals about the panel's schedule.

She's on a mission to fix Canada's pipeline regulator

Unfortunately the energy companies and the NEB fail to recognize and understand what landowners' lives are about with regards to their lands, water and air. Indigenous peoples do not have exclusivity about these relationships. Farmers in particular, are the best stewards of their lands - they strive to protect the environment for the betterment of the world and for their livelihoods,

As long as the NEB gives energy companies Right of Entry, 30 metre safety zones either side of their pipelines with no landowner compensation, environmental carte blanche, and a severely unbalanced Goliathan playing field against landowners' rights, this "modernization" process is merely window dressing by NRCan and the Liberals.

No one sees the light through this adulterated transparency.

Thank you to the National Observer for their participation and continuing investigations.

Transparency is a nice word..

Transparency is a nice word....but I'm not sure what it means in relationship to the NEB. Does it mean that the full cost of these pipeline projects is assessed, and those assessments passed on to the public? Because as another commentator on this feed tells us, farmers lose significantly when a mega pipeline goes through their land....and so far transparency has not made most Canadians aware of how easily big corporations walk over heritage farms.......nevermind essential watersheds.

Does transparency include calculating in the real costs of a spill like that experienced by the people living along the Kalamazoo River in Michigan? Do we get to factor in the long term fracking profile that goes along with liquifying bitumen and pushing it across our country for the next 40 years?

I do believe the NEB is a captured outfit....as long as it okays projects that have the footprint of bitumen pipelines..........without factoring in the negative consequences to so many citizens who have neither the clout, or the happy expectations of profit...that Big Oil contemplates. Only when we balance the downside against the economic benefits will the process be 'transparent'. At present, its just a nice sounding euphemism for business as usual.

Four months later, the same lack of trust and transparency persists.
The NEB does not recognize, let alone understand, landowners' issues.
Their approach to issues is always from the industry's side.

When is the purported " modernization" going to start, because it's going to take an extremely long time (if ever) to make any headway.