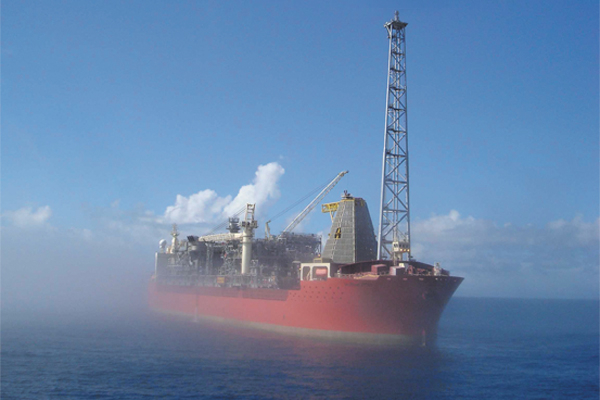 A floating oil storage platform off Newfoundland has had a near-miss with an iceberg the size of a small office building.

Husky Energy said a "medium size" iceberg came within 180 metres of the SeaRose FPSO (floating production and storage offloading) at about 5:30 a.m. Wednesday.

"We had an iceberg pass close by our production facility," Husky's Colleen McConnell said Thursday.

"We've been monitoring this particular piece of ice for awhile. It changed direction at about two in the morning, and we obviously had to respond quickly."

The Canada-Newfoundland and Labrador Offshore Petroleum Board described the iceberg as 40 metres wide, 60 metres long and standing eight metres above the waterline.

The massive, 270-metre SeaRose is Husky's lone oil-producing asset in the area. Built in 2004, the red-hulled, ship-like vessel can also store up to 940,000 barrels.

The board says Husky de-pressurized production wells and flushed flowlines with treated seawater, while the crew mustered in preparation for a potential disconnect.

But the iceberg passed without incident and was more than 500 metres away by 6 a.m.

The board says it is discussing the near-miss with Husky.

Icebergs are monitored constantly in the area, about 350 kilometres east of St. John's in the Jeanne d'Arc Basin, McConnell said.

She said Husky uses satellite monitoring and dedicated surveillance flights to monitor for icebergs in what has been a busy season for them.

"There have been a number of icebergs in the area, we've been monitoring and managing those," she said. "Certainly, we've had a very busy number of days."

The company has several vessels in the area able to undertake ice-management measures, including towing and water cannons, she said.

McConnell wouldn't speculate on whether the SeaRose was in danger of being hit, or what might have happened if it had been.

The SeaRose took similar measures in 2015 during another near-miss. It has never had to disconnect, she said.

She said Husky decided Wednesday to move its nearby drilling rig, the Henry Goodrich, into an ice-free area. It had already suspended operations on Sunday because of ice and weather conditions.

Alaska underwater pipeline leak may have started in December