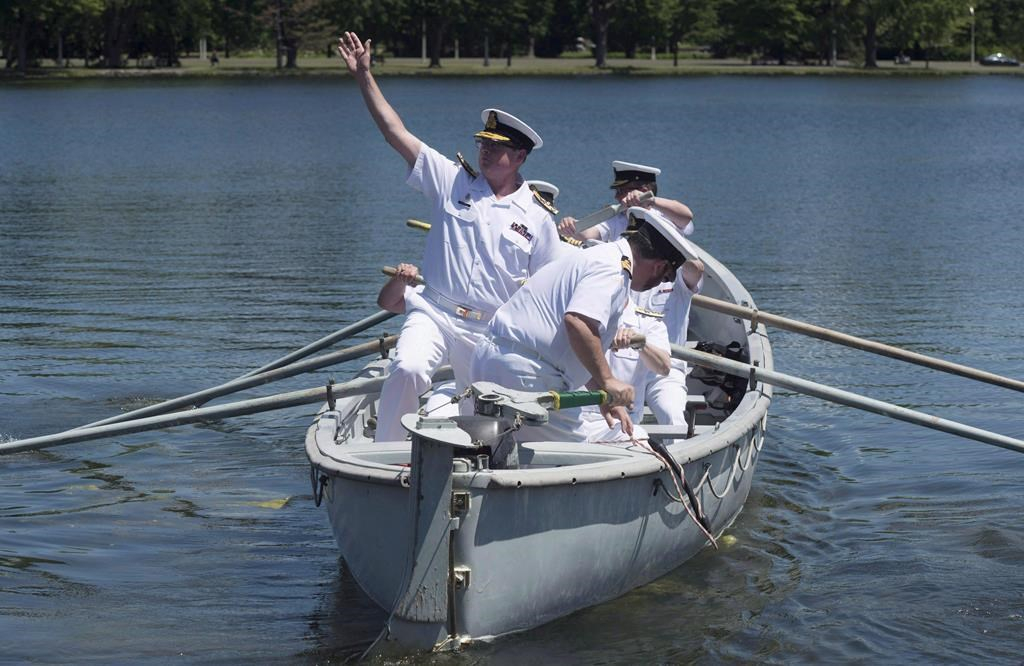 Norman waves goodbye as he is traditionally rowed away in a whaler after stepping down as the head of the Royal Canadian Navy in a ceremony Thursday, June 23, 2016 in Ottawa. File photo by The Canadian Press/Adrian Wyld
Previous story
Next story

The military's second-in-command leaked cabinet secrets to a shipbuilding executive as a means of pressuring the Liberal government to approve a $700-million contract, the RCMP alleges in newly disclosed court documents.

The Mounties are accusing Vice-Adm. Mark Norman of using his position to provide cabinet confidences to Spencer Fraser, chief executive of a special arm of Quebec City shipyard Chantier Davie that was leading a tentative project to convert a civilian ship into an interim navy supply vessel.

In turn, the information was passed on to lobbyists and the media with the aim of ensuring final federal approval of the project, RCMP Cpl. Matthieu Boulanger alleges in his Jan. 4 request for a warrant to search Norman's house.

An Ontario court had released a heavily censored version of the documents earlier this month. A fuller version was disclosed Wednesday after the Globe and Mail and other media outlets successfully argued in court that the public had a right to know more about the allegations.

The RCMP request for a search warrant was part of a months-long investigation into how details of a Liberal cabinet meeting in November 2015 were passed on to defence lobbyists and the media.

During that meeting, Liberal ministers decided to push pause on the controversial ship conversion project.

"Norman was opposed to the delay in the (project) process proposed by cabinet and leaked information subject to cabinet confidence in order to achieve the result that he wanted personally," Boulanger alleges in his request for the warrant.

"Norman's actions resulted in a circumvention of the established processes and procedures in place to ensure confidence in the cabinet," going against the public good and constituting a breach of trust under the Criminal Code, he continues.

Breach of trust is punishable by up to five years in prison.

No charges have been laid against Norman, who was appointed vice-chief of the defence staff in August 2016, then abruptly suspended from that role without explanation on Jan. 16 by his superior officer, defence chief Gen. Jonathan Vance.

Norman's lawyer, Marie Henein, said in a statement in February that the 36-year military officer "unequivocally denies any wrongdoing."

Notably, Boulanger says in the newly disclosed records that he has reason to believe "two government officials independently leaked classified information" about the vessel contract.

The Conservative government had awarded the $700-million ship project to Chantier Davie without a competition after the navy's previous two resupply vessels were forced into early retirement.

The request to search Norman's house came after the RCMP had already interviewed several senior Liberal cabinet ministers as well as influential Ottawa lobbyists about the apparent leak.

Liberal and government officials were particularly concerned that Cudmore's report included key details from a secret cabinet committee meeting the day before in which that decision was made.

The investigation was handed some weeks later to the RCMP.

Boulanger writes in his search-warrant request that the contents of the meeting were protected by cabinet confidence and should not have been public knowledge.

RCMP officers interviewed Environment Minister Catherine McKenna and Treasury Board President Scott Brison, both of whom said the leak had affected the ability to do their jobs.

Brison is quoted as telling the Mounties that the news report "did an awful lot to limit our ability to really do what we'd [the committee] intended to do, and that is more due diligence on this."

The court documents show that the Liberals decided to pause the project amid intense backroom lobbying by Halifax-based Irving Shipyards and its rival Chantier Davie.

The Conservatives had entered into an agreement with Chantier Davie in July 2015 after asking industry for ideas on filling the gap caused by the early loss of the navy's two resupply ships.

But emails obtained by the RCMP show Davie officials were worried in November 2015 that the new Liberal government would pull out after Irving urged several cabinet ministers to reconsider its proposal.

The RCMP obtained the emails with search warrants against Davie and two Ottawa lobby firms it had hired for the project, Hill+Knowlton Strategies and Fleishman-Hillard Canada, as they sought to trace how the secret information was leaked.

The emails, which were submitted to the court, show Davie officials Fraser and John Schmidt, as well as lobbyist Brian Mersereau of Hill+Knowlton, planning to fight back against Irving.

That included, in Schmidt's words, trying to "put pressure on Brison," whose department holds the government’s purse strings.

Personal emails leaked to several media outlets this month indicate Norman was extremely frustrated in November about the way the government and bureaucracy were handling the project.

Norman, who was head of the Royal Canadian Navy at the time, even talked about resigning over the issue, but instead stayed on and took over as vice-chief of defence staff in August 2016.

The Liberals ultimately decided to leave the shipbuilding project with Davie after it was revealed that the government would have to pay the shipyard $89 million if it were cancelled.

The interim resupply ship is expected to be delivered this fall.

— With files from Lee Berthiaume