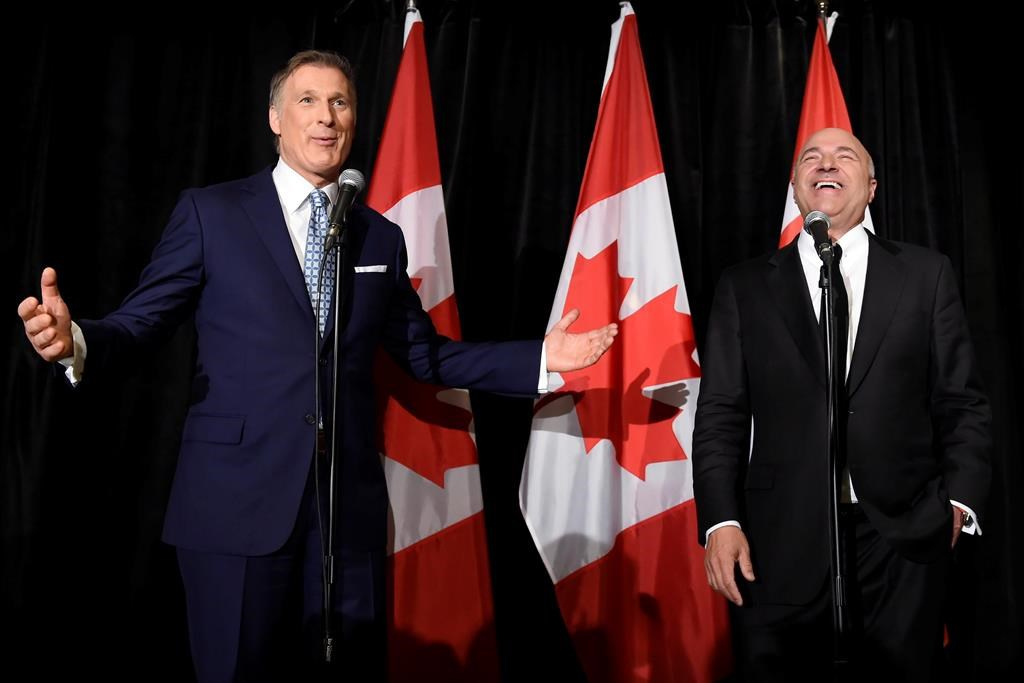 Maxime Bernier (left) gestures as Kevin O'Leary looks on at a news conference in Toronto on April 26, 2017 after O'Leary announced his intention to quit the Tory leadership race. Photo by The Canadian Press
Previous story

Kevin O'Leary may be gone from the Conservative leadership race, but he doesn't intend to let himself be forgotten.

Instead, the reality TV star and businessman said merger talks were held Thursday between his campaign and Maxime Bernier's to solidify a plan for the pair to work together between now and May 27, when the new leader is chosen.

O'Leary dropped a bombshell into the leadership race Wednesday when he declared he was giving up his candidacy because he didn't see a path to victory in Quebec and would instead throw his support behind Bernier, a longtime Quebec MP.

Though, he told The Canadian Press in an interview Thursday morning from New York, he tried to make it happen the other way.

Discussions included the idea of Bernier being given a position akin to a deputy prime minister, O'Leary said, but ultimately he accepted Bernier's argument that such an arrangement wouldn't persuade Quebec voters to back O'Leary.

O'Leary, known for his stints on the reality business shows "Dragons' Den" and "Shark Tank", remains a popular TV personality in the U.S. and dabbles in dozens of companies. None of that mattered in Quebec though, because there they don't see him on TV, he said, and the fact he was born in the province didn't count for much.

His decision to drop out wasn't motivated by a desire to protect his personal brand from being tarnished by a loss, he said. He said he'll prove that by campaigning for the Conservatives from now until the next election to fulfil his original promise to unseat the Trudeau Liberals.

"I don't need a job, I need to finish the task I started," he said.

O'Leary said while he has respect for the achievements and campaigns of other candidates — he specifically mentioned Lisa Raitt and Kellie Leitch — he feels neither can achieve electoral success in 2019 because they share the same liability: they don't speak French.

The fact O'Leary dropped out is an important lesson for everyone, candidate Michael Chong said in a speech to the Empire Club in Toronto on Thursday.

By Chong's calculus, that means the only viable candidates are himself, Bernier and Andrew Scheer and he positions himself as the only one among them with policies that could actually win.

Scheer trotted out a new endorsement Thursday, saying he's earned the backing of former P.E.I. MP and cabinet minister Gail Shea, who praised his understanding of the "diversity and importance of all the regions of Canada."

O'Leary said that was among the things he failed to understand until it was too late. In the interview, he said until he was really into the campaign, he didn't grasp the complexity of the country's regional dynamics.

It was a lesson he first received from former prime minister Stephen Harper in one of their talks, he said, but it became clearer as he criss-crossed the country.

O'Leary said that if the campaign with Bernier goes well, he hasn't ruled out a run for Parliament in the 2019 election. He said he and his wife are going to continue learning French, aiming for immersing themselves for two weeks at a time, in places like Geneva, France or Quebec City.

"I have the bug, I really do," he said. "I loved it but it also broke my heart at the same time."

Will Kevin O'Leary ride the 'Trump Bump' to victory in Canada?