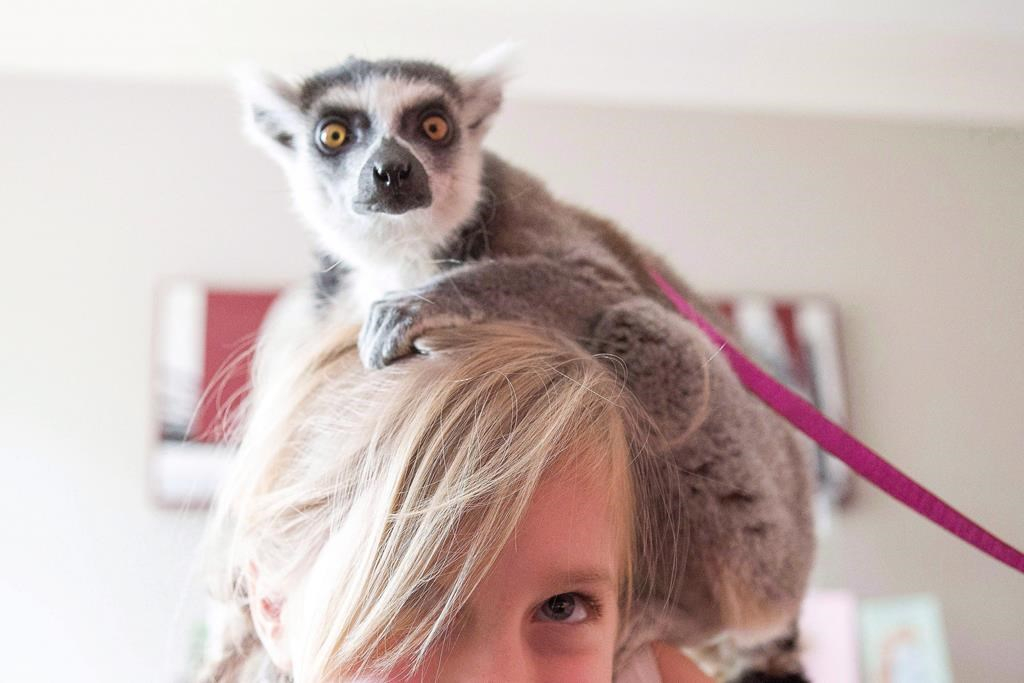 A lemur from an exotic animals company is seen at a child's birthday party in Toronto in this 2013 photo. File photo by The Canadian Press/Chris Young
Previous story
Next story

Canada's most populous city has an exotic animal problem.

Staff with the City of Toronto admit that a bylaw on prohibited animals contains loopholes allowing so-called mobile zoos — which take animals around for events ranging from birthday parties to church picnics — to flourish with little oversight, raising concerns about animal welfare and human health.

To deal with the issue, the city has launched a wide-ranging consultation on prohibited animals that involves an online survey for the public, as well as meetings with exotic animal businesses and animal welfare groups to address the "significant rise" in mobile zoos.

Toronto already has an extensive list of banned animals, such as monkeys, tigers and alligators, and owning one could result in a $240 fine. But the city admits there are weaknesses in the rules, particularly when it comes to mobile zoos.

An investigation by The Canadian Press last fall found that mobile zoos working with exotics — wild animals taken from their natural habitat or bred in captivity and not native to the country — appear to be on the rise in Canada, with industry watchers blaming a patchwork of outdated and inconsistent laws and bylaws for the trend.

Some experts have said exposure to disease through mobile animal businesses is a concern since many exotics harbour contagions that do them no harm but can put humans at serious risk. Animals who are not adapted to endure significant human contact may also lash out in unexpected ways.

Data on mobile zoos is hard to come by. The Ontario Society for the Prevention of Cruelty to Animals, for instance, had indicated late last year it only had five such mobile zoos registered in the province, but a list compiled from industry watchdog Zoocheck shows nearly 70 have popped up in the Greater Toronto Area over the past few years.

In Toronto, a prohibited animal bylaw granted mobile zoos an exemption to the rule if they were accredited by Canada's Accredited Zoos and Aquariums, the self-regulating industry group for which members pay dues, and were located in an industrial zone.

Last December, an amendment to the bylaw got rid of that exemption, but grandfathered in companies already operating in the city.

At the same time, city council also tried to get rid of another part of the bylaw that allowed exotic animals to be taken anywhere in the city as part of an educational program.

It was at that point that about two dozen operations contacted the city to complain they weren't consulted, Glibbery said.

"We didn't realize how many businesses this would affect," Glibbery said, adding 26 business that deal with exotic animals were scheduled to sit down with the city in the coming weeks.

Now it seems everything is on the table, Glibbery said, from ridding the city of mobile zoos entirely to changing Toronto's list of prohibited animals, including the possibility of moving to a "positive" list — a list of animals people can own, as opposed to those they can't.

It has taken years for the loopholes in Toronto's prohibited animal bylaw to be addressed, with city staff citing the backlog of work at the licensing and standards department for the slow progress. The exceptions to the rules may well have remained in the dark were it not for a now-infamous flamingo.

In 2013, Coun. Paula Fletcher said she heard complaints about a kangaroo being walked on a leash in her ward.

Incredulous, she started researching and discovered Hands On Exotics, a Toronto-based company that describes itself as an animal shelter specializing in exotics. It runs what it calls education programs for schools, community centres and private events, like birthday parties, where animals are taken to meet the public.

Fletcher found that Hands On Exotics was operating in her ward and owned the kangaroo she had seen, along with many other animals on the prohibited list. She decided to visit the organization to learn more.

"I looked in their window and saw a flamingo in this large room standing on one foot in an aluminum pie tin in small amount of water," Fletcher said in an interview. "I felt terribly sorry for that flamingo and it spurred me on. We have to get a proper bylaw to protect these exotic animals from being exploited in this city."

Hands On Exotics said the flamingo had access to plenty of water and emphatically denied what Fletcher said she saw.

Seth Falk, the owner of the company, said his business treats animals well and is inspected regularly by the OSPCA.

"For us, most of our shows are with special needs people and seniors and those who can't go to the zoo," he said. "Education with animals isn't going to be done in the same manner in every facility."

But Coun. Glenn De Baeremaeker, who is leading a push to rid the city of mobile zoos, scoffed at that explanation.

"Nobody is really educated, they're just entertained with some novelty items and it's totally unnecessary," he said, highlighting the case of the infamous flamingo.

Flamingos, incidentally, are not currently on Toronto's prohibited animals list.

After its public consultations, the city's licensing and standards bureau will draft a report on prohibited animals in the city that will make its way through committee and council meetings.