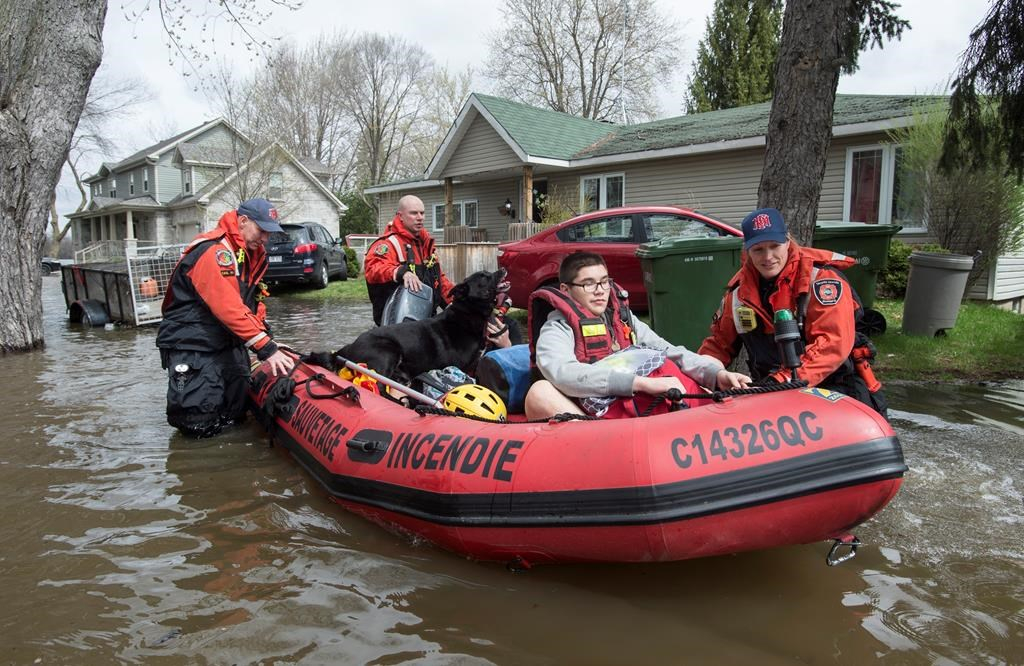 Montreal residents are evacuated from their homes after overnight flooding on May 3. Photo by The Canadian Press/Paul Chiasson
Previous story
Next story

High water levels threatening flood damage to hundreds of homes in Ontario and Quebec will continue to rise, warns the federal environmental engineer in charge of reporting this data to international authorities.

The warning comes on the heels of one of the wettest Aprils on record that saw Lake Ontario rise 44 centimetres. Flooding has threatened hundreds of residences in the region, and more than 130 homes were evacuated in Gatineau, Que. across from Ottawa as of May 4.

Île Mercier, a small island off Montreal, was submerged by floodwaters, while Rigaud, a town in southwestern Quebec at the junction of the Ottawa River and the Rigaud River, declared a state of emergency.

“Water levels are going to go higher, because the inflows are still coming in more than we can release,” said Gail R. Faveri, an engineer with Canada's national hydrological service inside Environment and Climate Change Canada, and the secretary of the joint Canada-U.S. board.

"It's just too much water everywhere"

Inflows, such as snow melt from the upper reaches of the Ottawa River, continue to mix with a high volume of rainfall, adding to the torrent of water, she said.

Faveri’s board is in charge of regulating the flow of Lake Ontario into the St. Lawrence River. The main control structure for this is the Moses-Saunders Power Dam near Cornwall, Ont. It’s one of four dams between Lake Ontario and Montreal.

The board has been adjusting the flow every day, sometimes twice a day, since the beginning of April, she said, to try to provide maximum flood relief to people who live along the shoreline of Lake Ontario and downstream.

The dam hasn’t seen this much action since 1993, the last time Lake Ontario was this high. But the system can only handle so much.

“This rainfall has been coming up from the Gulf of Mexico, swinging along and hitting Lake Erie, hitting Lake Ontario, going down the St. Lawrence river valley, and in the process hitting Ottawa,” she said, where snow melt has been mixing in with the river.

“It’s just too much water everywhere.”

Up to 70 millimetres of rain is expected this weekend in Toronto and surrounding areas, the same amount that usually falls over the entire month in the region, according to a Global News meteorologist.

Scientists say extreme weather like flooding is likely to become more frequent in some regions due to climate change.

Changing climate conditions are likely being caused by human activity, scientists say, and could be mitigated by reducing global consumption of fossil fuels, deforestation and changes to land-use.

Faveri said it was difficult to draw a direct connection, but climate models do point to more extreme weather.

While there is no “conclusive evidence that climate change is driving water levels in the Great Lakes,” she said, over the long term, as the climate changes, the average water level is actually expected to go down.

‘We will be ready to help,’ says federal government

In Yamachiche, a town near Lac Saint-Pierre, which is the name for a widening of the St. Lawrence River south of Trois-Rivières, Que. the water levels were so high that a passing ship created two-meter waves that crashed onto shore and damaged houses and yards.

New Democratic Paty MP Ruth Ellen Brosseau asked about the situation in Question Period on May 2. Fisheries Minister Dominic LeBlanc replied the Coast Guard had issued a notice to reduce speeds and that the government was investigating.

"We know that many communities in Quebec and across Canada are having a hard time this flood season," he said.

In response to questions, Environment Minister Catherine McKenna's office said the department is mindful of the impact of fluctuating water levels on communities.

"We are also monitoring and providing similar information to decision makers for both the Great Lakes-St. Lawrence and the Ottawa River."

Faveri, who was recently in Washington, D.C. reporting to the International Joint Commission that oversees her board’s work, prepares logistics and communications for the board, as well as the presentations to the commission.

She said the board is planning to contact as many agencies as possible in the United States and Canada to let them know about the high waters.

One of her tasks is educating the public about what the board can actually do. The board’s Facebook page, for example, is filled with people discussing where the appropriate water levels should be, with more than a few complaints.

Facebook comments have risen from around five a week to 10-12 a day, she said.

“A lot of the people think that because there’s a dam, water levels will remain constant all year round,” said Faveri.

“They don’t understand that all that we are controlling is the outflow,” or the amount of water allowed to escape the dam and flow along to Montreal.

Another factor is that new rules were agreed to by the United States and Canada in December 2016, replacing a plan that had been in use since 1963. The new plan allows that Lake Ontario levels can remain higher for longer during wet years, like this year.

That’s because the older plan that kept the water level within a narrow band was damaging for fish, wildlife and marshlands said Faveri—not to mention recreational boaters who complained the level dropped too quickly in the fall.

But some individuals believe the new rules are causing the flooding, she said.

“It’s human nature. You’d say, ‘Well, we’d been going along fine and then all of a sudden you change the plan and I’m being flooded, it must be because of the new plan,’” she said. “They don’t draw the conclusion that it’s been raining a lot."