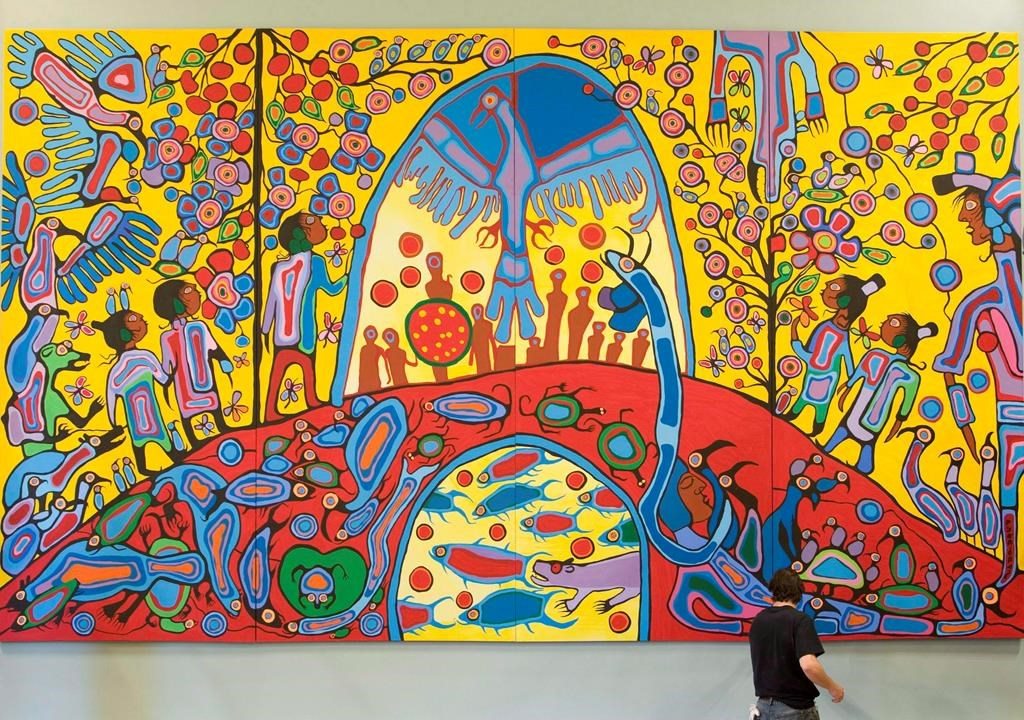 The work of Toronto painter Amanda PL is infused with bright colours and bold outlines often associated with an indigenous art style.

But for many of those familiar with the Woodland School of Art, as the genre is also known, it smacks of cultural appropriation by a young artist with no claim to the tradition.

Outrage over Amanda PL's work has renewed debate over who has the right to use and profit from specific customs.

It's a decades-old problem that is only gradually being understood in a field where ideas and images are continually borrowed, traded and reinvented, say observers.

B.C. lawyer Vanessa Udy says the broader public seems to be becoming more sensitive to possible cultural slights. But the onus of identifying them falls on the person who finds it offensive, and that can be difficult to determine and articulate at times.

There's no easy formula to apply when feelings are hurt — Udy notes each case requires a nuanced evaluation.

"Is it a person from a group who is in power over a group that is more dispossessed? Does the commodification of their culture put down their culture? Will it create negative stereotypes in the eyes of others?" explains Udy, an intellectual property lawyer who returned to school after seven years of practice to study aboriginal law.

"That's part of the problem of cultural appropriation, and why people don't always seem to get it is because it is an intellectually demanding process to go through in analyzing each case."

The Toronto gallery that planned to exhibit Amanda PL's work was quick to cancel when two complaints came in, says co-owner Tony Magee, who adds he's now fielding complaints from those angered by the cancellation.

"We didn't make our decision (to cancel) out of political correctness. We didn't do it as caving to pressure. We did it because we opened our eyes," says Magee, whose shop opened in January.

Amanda PL has said her work was inspired by the Woodland school and has acknowledged a similarity to the work of Anishinaabe artist Norval Morrisseau. The problem for many is that she's white, and seems to have made no effort to consult with the Anishinaabe community even after vociferous protest.

The flap follows an uproar at the Whitney Biennial last month, when Brooklyn, N.Y.-based artist Dana Schutz came under fire for her abstract painting "Open Casket."

It depicts the mutilated face of lynching victim Emmett Till at his 1955 funeral. The work sparked outrage among several African-American artists offended that a white woman would tackle the subject, especially since it was a white woman whose unfounded accusations led to Till's murder.

The Whitney has refused to remove the painting, saying the museum provides a platform to explore critical issues.

But the difference here is that Schutz created the work as a reaction to last year's Black Lives Matter protests, notes Magee. She has also said she has no intention of selling it.

There's certainly room for culture to be borrowed, shared and reinvented, says the man in charge of indigenous art at the National Gallery of Canada.

"Knowledge of cultural tenets and beliefs move back and forth across cultures through history. That's probably a good thing," says Greg Hill, who is of Mohawk descent and from the Six Nations of the Grand River Territory.

"It becomes a problem when things are borrowed or taken and they're used out of context or they're misunderstood, they're not understood and they're unknowingly or purposefully used in an inappropriate way."

He points to strict rules within various cultural groups about who can do what, and who has the right to inherit stories and imagery.

"These things are passed down from generation to generation. It's really ignorant to just come in and take something and not acknowledge when it's being pointed out to you that there might be a problem with what you're doing," says Hill, senior Audain curator of indigenous art.

He points to the collaboration between Metis artist Christi Belcourt and the fashion house of Valentino as one example of how things can go right.

The Italian designer incorporated images from one of Belcourt's paintings into his 2016 Resort line, which included shorts, halter tops and dresses.

"She was contacted. She was compensated and credited," says Hill.

This debate is not new.

Fashion designer Marc Jacobs was forced to apologize last September after ending New York Fashion Week with a runway show of models in wigs that looked like dreadlocks.

Just last week, the creators of a series of costumes planned for the Toronto Caribbean Carnival apologized for incorporating headgear styled after sacred indigenous headdresses, but refused to say they would be scrapped.

An especially odd flap emerged at the University of Ottawa in 2015 when a yoga instructor says her free class was cancelled because of concerns over cultural appropriation.

Udy, currently preparing an article on the issue for the French language publication "Revue l'Argument" out of the University of Ottawa, says there are no legal mechanisms outside of copyright and intellectual property to deal with such a grey debate.

But even those guidelines can be problematic.

Culture critic Jesse Wente says society and media have become more inclusive, which may be why we seem to see transgressions being called out more often.

He found it unique that the gallery shut down Amanda PL's show. But he links the case to a continuum of colonialism and Canada's history with indigenous people, noting appropriation was "state sanctioned in Canada for decades."

"Storytelling is foundational to our survival, our continued survival," says Wente, who is Anishinaabe. "The theft of our story is the loss of our culture. It is our assimilation. That's why in the arts it actually matters to us as much as anything else.

"This is as important as the pipelines, as sovereignty, as water. They're all interconnected."