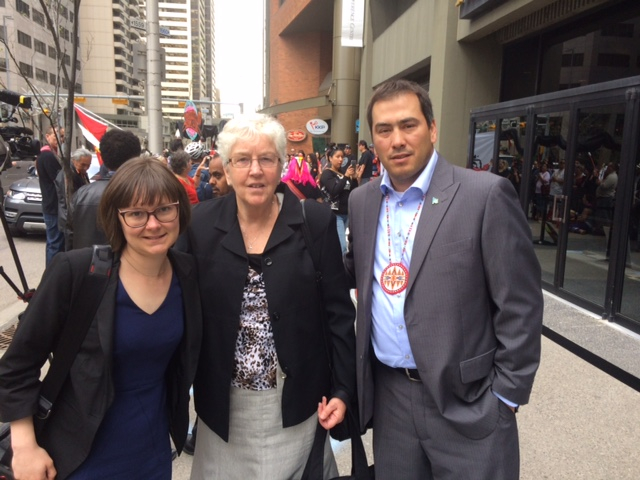 Addressing shareholders of the Calgary-based energy company, Enbridge Inc., was a valuable human-to-human experience, said a leader of the Standing Rock Sioux in North Dakota, even though the motion he supported fell flat.

Tribal Councillor Chad Harrison spoke at the corporation's annual general meeting on Thursday, where he urged shareholders to adopt a proposal that would require Enbridge to disclose how it plans to address social and environmental risks — including infringement of indigenous rights — when it buys new assets.

Seventy per cent of shareholders voted against it, but Harrison said his message was still "driven home."

“The proposal was defeated, but we got 30 per cent approval which was a pleasant surprise. It shows the human element of it,” he told National Observer. "There were people there that are shareholders of the Enbridge company that are trying to push social, environmental responsibly.”

The proposal was launched by the Sisters of Charity in Halifax, a Catholic religious order that owns company shares. They support socially responsible investments and shareholder action to change corporate policy on several issues including climate change. The Enbridge shareholder proposal was prompted by the company's purchase of the U.S. Bakken Pipeline System earlier this year, which includes a 27.5-per cent stake in the Dakota Access Pipeline (DAPL).

That project drew months of high-profile protests from indigenous groups and thousands of supporters both in Standing Rock, N.D. and across North America over its potential to contaminate the local water supply. Protest camps near the pipeline route galvanized support for indigenous rights around the world as local police were filmed lobbing tear gas at protestors and arresting hundreds.

The camps have subsequently been dismantled and the pipeline is near completion. Reports of its first leak surfaced this week.

“The protest, the movement, could most likely have been prevented,” Harrison told his Calgary audience. “Transparency, diligence, consultation, prior and informed consent could have prevented much of this.”

Enbridge recommended against the proposal, saying its concerns are adequately addressed by its new enhanced disclosure rules.

“We’ve reached out to governments before, but a lot of times we don’t get to meet with decision makers," he said. "At a shareholder meeting, we’ve got the board of directors, the CEO, senior staff and having them present gives us an audience of decision-makers."

Sister Cecilia Hudec also spoke in favour of the proposal saying, “Attention to indigenous rights in company decisions is important both for the value of a company and for reconciliation in Canada.”

In response, Enbridge president and CEO Al Monaco told the annual general meeting that the company will push ahead with broader disclosure in its 2017 sustainability report.

“So one thing that shouldn’t be in doubt is the fact that we recognize and respect the legal and constitutional rights of indigenous peoples, and the vital relationship they have with traditional lands and resources, and I believe that our company has had great relationships built over many decades with indigenous peoples on either side of the border.”

In November 2016, the federal government formally rejected Enbridge’s proposed Northern Gateway pipeline from Alberta to a port in Kitimat, B.C. The province's stunning coastal temperate rainforest was "no place for a pipeline," said Trudeau, following months of indigenous and environmental protest against the project.

His decision followed a historic ruling by the Federal Court of Appeal which quashed the company’s permits because the previous Conservative government hadn’t adequately consulted First Nations when it gave the project a green light.

Delaney Greig of the Shareholder Association for Research and Education (SHARE) helped the Sisters of Charity bring the proposal to the company. She said they took the step of approaching shareholders — rather than simply selling their shares in the company — because they believe it has a bigger impact.

Monaco also told reporters that the company hesitated before buying into the Dakota Access pipeline because of widespread protests, but ultimately decided it was a sound investment.

"It was hard to miss what was going on out there, and we were very concerned about it. Frankly, we spent a lot of time pondering this issue given the circumstances," he said.

On Feb. 27, Enbridge also finalized a merger with Spectra Energy Corp. The transaction created the largest energy infrastructure company in North America, and one of the largest in the world — with an enterprise value of approximately $166 billion.