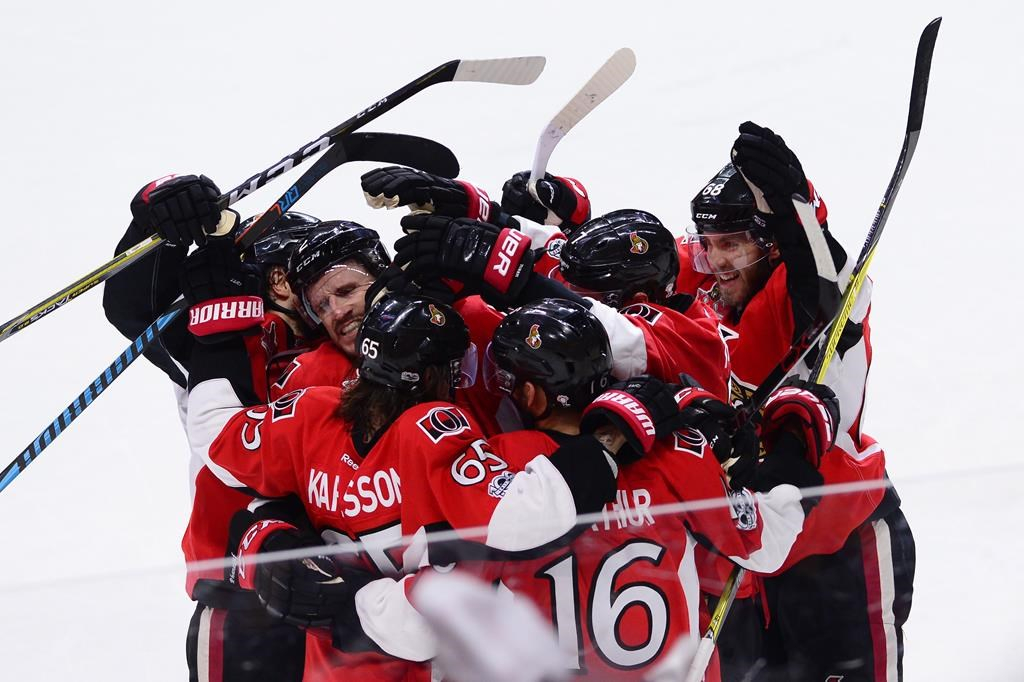 Ottawa Senators players celebrate after scoring against the New York Rangers late in the game during the third period in game five of a second-round NHL hockey Stanley Cup playoff series in Ottawa on Saturday, May 6, 2017. File photo by The Canadian Press
Previous story
Next story

Prime Minister Justin Trudeau says he's setting aside his NHL allegiance to his beloved Montreal Canadiens for now to back the Ottawa Senators — and urging fellow hockey fans to join him.

Many of those fans have a simple message back: no thanks.

"I think all Canadians will be rooting for the final Canadian team in the Stanley Cup playoffs," Trudeau told a news conference today in Brampton, Ont.

The Senators, who face the Pittsburgh Penguins starting Saturday, were left standing alone after the Edmonton Oilers suffered a narrow Game 7 loss earlier this week to the Anaheim Ducks.

"We're all happy to support Ottawa right now," Trudeau said, "and even Torontonians and Montrealers can agree on this particular one."

If the reaction on social media has been any indication, that may not be the case.

Leafs and Habs fans on Twitter are just some of those who are treating the comments as an affront to their collective dignity.

"Fake news," tweeted one. "This is preposterous," said another.

Added a third: "I'll cheer when the Senators start golfing."

— With files from Colin Perkel in Brampton, Ont.

Wow, this paragraph is nice,

Wow, this paragraph is nice, my younger sister is analyzing these things, so I am
going to inform her.cheap basketball jerseys
free shipping

Hello there, just became aware of your blog through Google, and found
that it's truly informative. I am gonna watch out for brussels.

I will appreciate if you continue this in future.
Lots of people will be benefited from your writing. Cheers!p19151

of course like your web site but you need to
check the spelling on quite a few of your posts.
Several of them are rife with spelling problems and I
find it very bothersome to inform the truth nevertheless I'll certainly come back again.wholesale basketball
jerseys free shipping from China

Hello there, just became aware of your blog through Google, and found that
it's really informative. I am going to watch out for brussels.
I'll appreciate if you continue this in future. Numerous people will be benefited
from your writing. Cheers!
p1611

Hey there! This is my first

Hey there! This is my first visit tto your blog!
We are a team off volunteers and starting a new project in a community in the same niche.
Your blog provided us beneficial information to work on.
You have done a marvellous job! http://microurls.us/moresalesonamazonorebay59296

A fascinating discussion is

A fascinating discussion is worth comment.
I do think that you need to publish more on this issue, it might not be
a taboo subject but usually folks don't speak about such topics.
To the next! Cheers!!cheap baseball jerseys from China

Its like you read my mind! You appear to know a lot about this, like you wrote the book in it or something.
I think that you could do with some pics to drive the message home a bit, but other
than that, this is great blog. An excellent read.
I'll certainly be back.authentic jerseys China