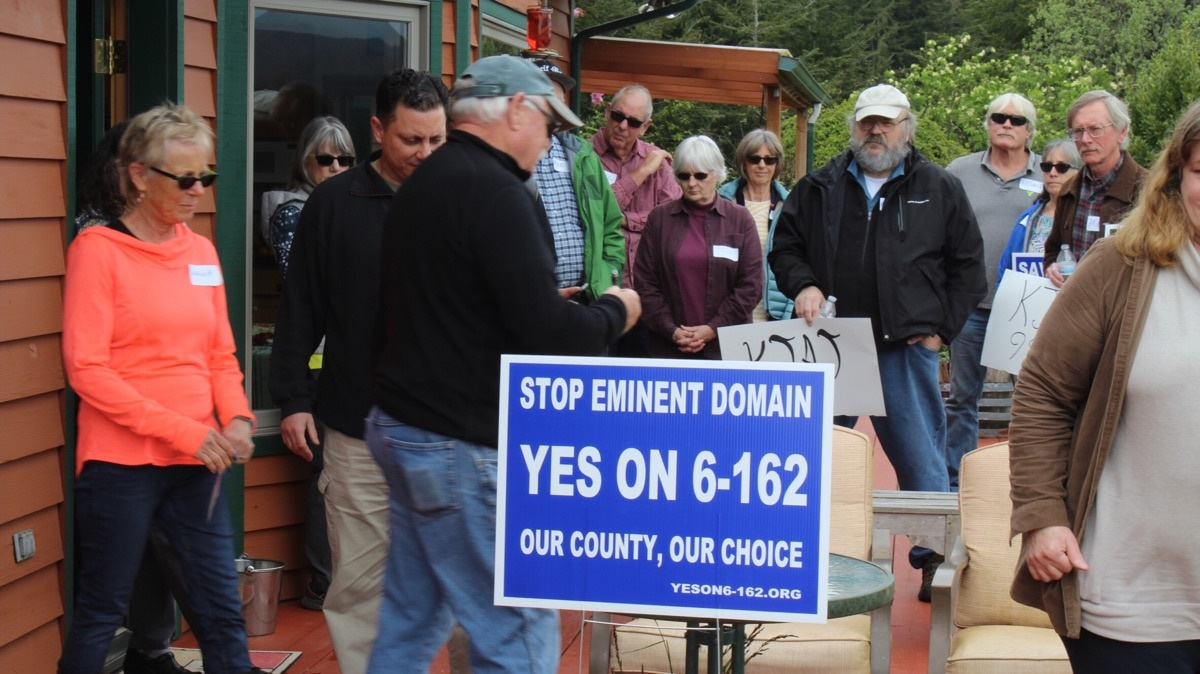 An April 26 pro-ballot rally in North Bend, Oregon, across the channel from the site of the proposed Jordan Cove gas export terminal by Calgary-based Veresen. Mary Geddry Photo
Previous story
Next story

An Oregon county votes Tuesday on whether to block a massive natural gas project proposed by a Canadian company with public support from the White House.

A May 16 ballot measure in Coos County, Oregon seeks to stop the $13 billion Jordan Cove Energy Project, a proposed liquefied natural gas (LNG) facility by Calgary energy company Veresen, which is set to be bought by another Calgary-based firm, Pembina Pipeline Corp.

Ballot measures are a form of direct democracy in Oregon, where citizens can vote on initiatives if enough signatures are obtained. The measure, which the state legislature can repeal or amend with a majority vote, calls for the ban of fossil fuels being transported through the county that aren't being used for local power, heating and transportation.

The measure is up against a powerful backer: U.S. President Donald Trump's chief economic adviser, who has met with the company to strategize how to push the project through.

Jordan Cove, which would be fed by a proposed 373-kilometre pipeline bringing gas from Western Canada to the northwest U.S. state, would be “the largest single private investment in the history of southern Oregon,” according to the company. It would create 4,000 temporary construction jobs over five years and 240 permanent “high-paying” jobs, says the company.

But its opponents say it "would become the single largest greenhouse gas emitter in the entire state of Oregon and use eminent domain to take U.S. citizens' property."

"Owned by a Canadian firm, the company will take private property from U.S. citizens to benefit Canadian shareholders," reads a website by Coos Commons Protection Council, which is backing the petition.

Echoing a fight against a large LNG project in British Columbia, ballot proponents say they want to stop the U.S. Northwest from becoming a fossil fuel gateway.

“We want a sustainable future, a sustainable economy, and we don’t want to be a resource colony anymore,” Mary Geddry, co-petitioner of the measure, said in an interview with National Observer.

This has been a years-long effort for Geddry. The petition was first filed 2014, and then was approved to start collecting signatures to set up a vote.

She said she's faced intense and well-funded industry opposition. “When you’re up against this kind of money, the odds of us prevailing tomorrow get lower and lower," she said on Monday. "But I’m optimistic that people can see through it. That’s my hope."

Support for the measure was high among residents who live near the terminal's proposed location - roughly 70 per cent - and dropped to 60 per cent in the nearby community, she said. In rural areas, "people really didn’t care, except along the pipeline route where nobody wants it," she said, or they discussed alternative routes.

Geddry said she would have the same opinion as an American company. "But the Canadian aspect...people are pissed about it," she said. "Who the heck are you guys?”

National Observer asked Veresen and Pembina about the White House's interest in Jordan Cove and in oil and gas regulations in the U.S. and Canada.

Pembina responded in an email that "Veresen will continue to progress Jordan Cove in the immediate future."

"Pembina’s acquisition of Veresen requires shareholder approval and government consent which we expect later this year and, until close, we are unable to provide answers to such questions as below," an unnamed representative wrote. The company did not respond to follow-up questions.

In a phone call, Veresen spokesman Riley Hicks said the company would be declining comment on all questions due to the pending deal with Pembina.

The entanglement of Canadian fossil fuel interests and the Trump administration is also playing out in a larger battle over how much to regulate fossil fuel companies.

During the Obama administration, both Canada and the U.S. promised to limit emissions in the oil and gas industry of methane, the main component of natural gas and a climate pollutant many times more potent than carbon dioxide, by 2025.

Those two promises have so far taken slightly different paths in both countries. In Canada, the government decided April 20 to delay the start date of its new methane emissions regulations, while still promising that restrictions would be fully in place by the end date.

An assessment by the Canadian Association of Petroleum Producers had expressed worry about "U.S. competition," while Natural Resources Minister Jim Carr told Canadian Press shortly after the decision to delay that "we have to keep a very close eye on what our American partners do because the economies are so interlinked.”

But in the U.S., the ultimate fate of their rules is still unknown. In February, the U.S. House of Representatives voted to roll back the Obama-era methane rules, but on May 10 the Senate failed to follow suit.

Republican senators Susan Collins, Lindsey Graham and John McCain joined Democrats in voting down the rollback. Associated Press quoted U.S. Democratic Senator Ed Markey of Massachusetts stating the vote was "a win for American taxpayers, a win for public health and a win for our climate."

From rejection to White House support

Veresen has been trying to get Jordan Cove approved for years, without success during Obama's terms in office.

The project was turned down in March 2016 by the U.S. gas pipeline regulator, the Federal Energy Regulatory Commission (FERC), citing “adverse affects on landowners,” The Washington Post reported.

A request to reconsider it was also rejected, but Veresen started the process of refiling in February, after Trump was elected.

Veresen CEO Don Althoff met with Trump's economic adviser, U.S. National Economic Council director Gary Cohn, on March 10 at the White House where they talked about “what it would take” to get Jordan Cove built, Althoff told Bloomberg News.

He said the Trump administration made a “commitment to work with us” and that Jordan Cove “meets all the targets for what President Trump wants to do.”

“The White House is going to work on this with helping us get through the permitting process as quickly and as efficiently [as possible]; the message to us is ‘hurry up, get going,’” said Althoff.

The process was expected to take until mid-2019, but “if we can speed the permitting up,” that could be brought up possibly to next year, he said.

Now, Pembina's takeover of Veresen means Jordan Cove is even more likely to go ahead, Althoff told The Financial Post. “This was always the project that was a little too big for Veresen, but it isn’t too big for the combined entity,” he said.

Cohn, a Goldman Sachs veteran picked by Trump to be his economic adviser, wants the U.S. to become the "largest exporter" of liquefied gas in the world. The U.S. domestic market is facing a supply glut and depressed prices.

He told the Institute of International Finance that there was “one place we’re going to permit in the Northwest." Jordan Cove would be the first of its kind on the U.S. West Coast.

Following Cohn’s comments, the company's shares jumped "the most since the beginning of February," Bloomberg reported.