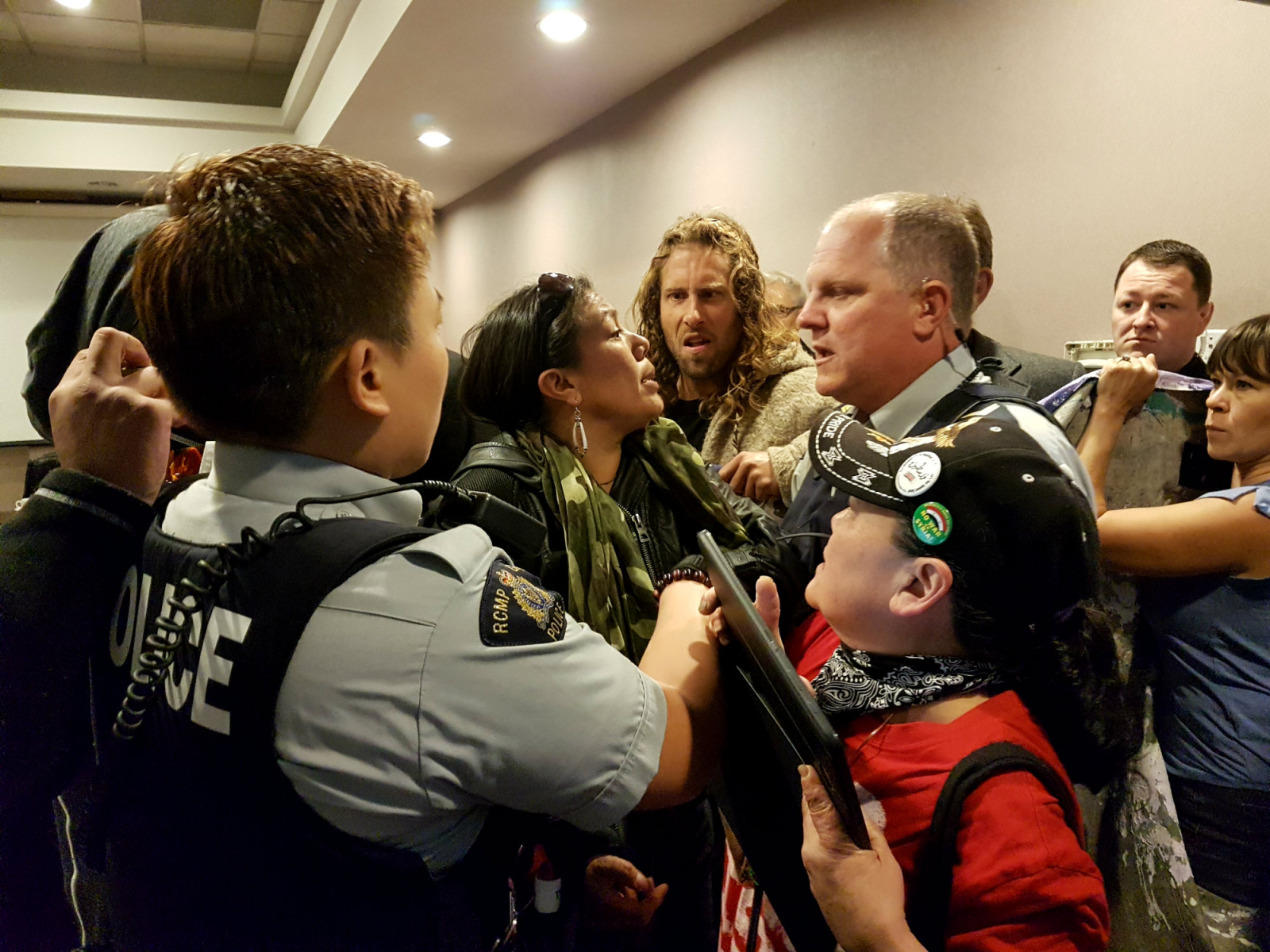 Protesters face off with RCMP officers outside the annual general meeting of Imperial Metals in Coquitlam B.C. on May 25, 2017. Photo by Bethany Lindsay
Previous story
Next story

Before the first protesters had even arrived at the annual general meeting of Imperial Metals, RCMP cruisers were already pulling up behind the Metro Vancouver hotel where the mining company’s investors were set to convene.

That meant that within a minute or two of security guards calling police Thursday morning, several Mounties were confronting a few dozen Indigenous activists and their supporters inside a conference room at the Executive Plaza Hotel in Coquitlam.

RCMP arresting drummer at Imperial Metals AGM. She was sitting in front of hotel door pic.twitter.com/flZO6eit8r

The protesters had stormed the space where the Imperial Metals' investors were meeting, unveiled a banner depicting the aftermath of the Mount Polley dam collapse disaster in central B.C., and informed those present that Imperials Metals was not welcome on Secwepemc Nation territory.

“We want them out of Yuct Ne Senxiymetkwe and the deepest glacier-fed lake in the world, which is being contaminated right now by the hands of Imperial Metals,” organizer Kanahus Manuel of the Secwepemc Women Warriors said in an interview later in the day.

“We were able to get right up into Imperial Metals. We got into a boardroom and we got to face off with Steve Robertson (a vice president at Imperial) and Brian Kynoch, the president of Imperial Metals, to show them that there will continue to be conflict and confrontation if they don’t recognize our title.”

The 2014 tailings dam collapse at the Mount Polley copper and gold mine in central B.C. is considered to be the greatest mining disaster in Canadian history. An estimated 24 million cubic metres of waste were spilled into Quesnel Lake, but no fines were imposed on Imperial Metals and no charges were recommended.

Then, just last month, the B.C. government approved a permit for the company to discharge wastewater into the lake.

“Right now we really need to show investors around the world that it’s a very risky investment to invest in,” Manuel said.

The rowdy demonstration saw one activist arrested and another four — including Manuel — forcibly escorted or even carried out of the hotel by police officers.

The activists were allowed to remain inside the hotel for a short time while police and security barred the entrance to the conference room. Protesters heckled the officers, asking why they were protecting a private company.

One shouted: “Your children and your grandchildren are going to ask you what you were doing to leave them something. What are you going to say? ‘Sorry, I was actually defending the mining companies that were polluting everything?’”

Once the protest was pushed outside, a line of police officers blocked the front entrance. That’s when RCMP say a woman carrying a hand drum tried to force her way back into the hotel. She was tackled to the ground by multiple officers and arrested as she struggled to break free.

“One protester tried to get through our police line and assaulted some police officers and as a result was arrested,” RCMP spokesman Cpl. Michael McLaughlin said, adding that charges of assault and property damage are being considered.

At the height of the police presence, at least 14 uniformed officers were on scene at the entrance to the hotel. More appeared to be on standby at a nearby SkyTrain station.

McLaughlin said he couldn’t reveal exactly how many Mounties had been called to attend, but added that both uniformed and plainclothes officers were on site.

“We’ve been aware that there was going to be a business meeting and there was a planned protest for quite some time,” McLaughlin said. “We had no intention of intervening unless public safety was at risk or property was possibly going to be damaged.”

He alleged that police were only called after hotel property was damaged.

Outside the hotel, Leonard John of the Ahousaht First Nation on Vancouver Island said that he was there as a protector of the land, not as a protester.

“I’m backing up what our chief told Imperial Metals: They are no longer welcome in our territory and they can push all they want — when push comes to shove, our warriors will be there,” he said.

Most of the protesters said they doubted they’d be able to convince investors to divest of their shares in Imperial Metals, but they still held out hope that change was possible.

Kajan Johnson, a UFC fighter who attended the protest, said he understood the thinking of the mining executives and their investors.

“I used to think like that at one time. I used to be doing things and profiting off the suffering of others,” he said. “I learned about how those actions are going to harm the rest of the world and I held myself accountable and now I do everything I can to stop these kind of practices. That’s all we can do as humans is learn and be better.”

Representatives of Imperial Metals did not respond to a request for comment on the protest before publication.