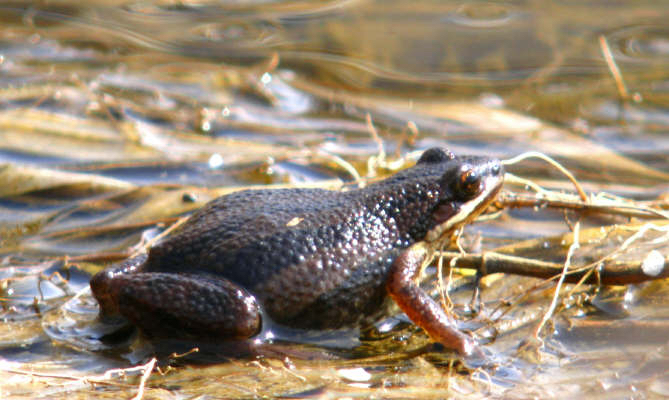 More than 9,000 fish and frogs were killed by a power failure at the University of Alberta during the month of May in 2017. Photo courtesy of Raymond Belhumeur, Nature Québec
Previous story
Next story

A power failure that unleashed chlorinated municipal tap water into freshwater tanks at a University of Alberta research facility has killed more than 9,000 fish and frogs.

The Edmonton university says an electrical short due to a corroded switch disabled two dechlorination pumps some time on May 12. The failure wasn’t detected until the following morning.

"The University of Alberta regrets the loss of any animal in our care and we are doing everything possible to ensure this does not happen again," Lorne Babiuk, vice−president of research, said in a statement Tuesday.

The university will not resume research involving the freshwater tanks until it’s safe to do so, he said. The Canadian Council on Animal Care has advised the university not to restock the tanks until a thorough review is done.

The university’s aquatics facility is home to a number of freshwater and marine species used for teaching and research, much of which focuses on environmental toxins such as herbicides and pesticides. It also studies fracking and climate change.

It’s the latest infrastructure failure at the university.

In April, a freezer malfunction melted some of the world’s largest collection of Canadian Arctic ice−core samples. About 12 per cent of the collection — some of which dates back to the last ice age — was damaged when temperature in the storage freezer soared to 40 C. The monitoring system also failed due to a computer glitch.

Babiuk said it’s unfortunate the two equipment failures happened back to back, but added they are not connected. The university has a $938−million backlog of deferred maintenance projects and upkeep for aging research facilities isn’t included on that list, he said.

"Funding for research maintenance is an ongoing challenge," he said. "We are doing what we can to mitigate those risks, but the reality is that even with a new facility, failures can and sometimes do occur."

The animal care council flagged the aquatic facility’s water treatment system during recent visits, the university said. It responded with a $25−million plan phased in over five years. Just over $2 million was earmarked to replace the water supply system and install chlorine monitoring — work which was scheduled to begin later this year.

In the meantime, the university has replaced the failed equipment and added an alarm to warn on−call staff if the dechlorination pump or its backup fails, Babiuk said.

The university is also planning to install a chlorine alarm which would be monitored around the clock from the university’s central control centre, he said. All interim measures should be complete within six weeks.

The death of so many fish has stalled some important research including a study into the environmental impact of fracking.

Greg Goss, professor in the biological sciences department, is leading the study, which is now halted, and said fish play a key role in toxicology research.

"I have people who have lost four to six months worth of work, so very significant losses," he said in a statement.

This catastrophe goes beyond

This catastrophe goes beyond the pale. What a gross example of mismanagement.