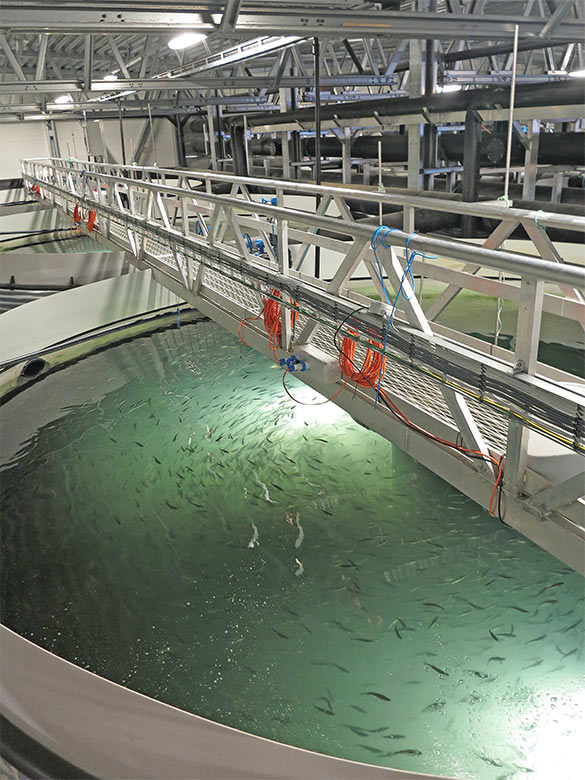 Scientists have detected a potential disease in farmed Atlantic salmon for the first time in British Columbia, but say more research is needed to determine if it could affect wild populations of the fish.

Dr. Kristi Miller, head of the molecular genetics research program in the Department of Fisheries and Oceans, said pathologists found lesions on salmon on one farm in Johnstone Strait indicating they had heart and skeletal muscle inflammation.

"These lesions were present for an extended period of time, at least eight months, on this farm," Miller said Friday.

The disease has been found in several countries, including Norway in the late 1990s, where it has been linked to low levels of mortality, with some farms showing no salmon deaths, while up to 20 per cent of fish die in others, she said.

The Piscine Reo-Virus has been associated with all outbreaks of heart and skeletal muscle inflammation, as it was on the single B.C. farm, but it's not known if it causes the disease, Miller said, adding scientists around the world are investigating how the virus could be linked to the disease.

However, many fish can carry the virus without having the disease, Miller said.

"This has been one of the difficulties in understanding the role of this virus in HSMI development. The single farm on which we discovered HSMI didn't experience unusual levels of mortality. In fact, the growth and production on this farm was considered excellent."

The virus likely originated in the marine environment, she said.

Heart and skeletal muscle inflammation in fish does not impact human health, and the disease has never been found in wild Pacific salmon.

"But DFO will continue to monitor the health of wild and farmed salmon in Canada and to track and collaborate with international research teams to more fully establish the risk factors associated with this disease," Miller said.

The research using new technology and international scientists was done between 2013 and 2015 on four Vancouver Island fish farms using more than 2,400 live and dying salmon.

Brian Riddell, president of the Pacific Salmon Foundation, which participated in the research along with Genome British Columbia, said the latest technology will allow scientists to analyze 45 microbes for the first time, leading to "revolutionary" diagnostics in wild populations.

"We are currently in the second phase of the analyses and we really just started this so I really have to emphasize the real concern that many people have in B.C. about the risk of wild salmon.

"We cannot comment on that yet," Riddell said, adding more findings will be revealed in the next two years.

He said research of the fish throughout their life cycle involved collaboration with the BC Salmon Farmers Association as part of the Strategic Salmon Health Initiative that began in 2013.

"Government and industry should expedite the science, provide necessary funding and work collaboratively for the sake of the aquaculture industry and for wild salmon," the association said in a news release.