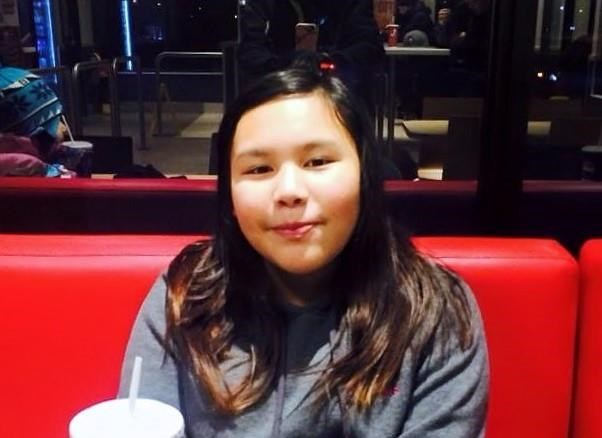 Jenara Roundsky of the Wapekeka First Nation in northern Ontario is seen in this picture taken in Dryden, Ont., in February 2017. Roundsky, 12, killed herself last week. Handout photo by Donnie Roundsky
Previous story
Next story

Grief-stricken members of a remote northern Ontario community were still struggling to cope on Friday after the suicide of yet another 12-year-old girl sparked fears a death pact could claim even more young lives.

The death last week of Jenara Roundsky, the third pre-teen member of the Wapekeka First Nation to die by suicide this year, prompted an anguished cry for outside help.

"We need help, we need help immediately," band spokesman Joshua Frogg said in an interview. "We have 10 and 12-year-old boys and girls that are acting like front-line workers, first responders and that's not acceptable."

So far, he said, no help has arrived, although he said Health Canada told him that long-requested federal money — $380,000 — should be in the band's account next week.

In a declaration of a state of emergency this week, Wapekeka's chief and band council noted the community — which also saw 15 young people kill themselves between 1989 and 1999 — desperately needed help.

"These losses and recent suicides have put the community in a state of crisis," the band said in a formal resolution. "Community members are going through a state of shock where they have been retraumatized to a point where they cannot help themselves."

Of particular concern, the band said, were worries that other youngsters, who were following first responders around the community, were being exposed to traumatizing circumstances after the discovery of Jenara's body sparked a frantic search for others at risk.

Jenara's father Vernon Roundsky died in 2011, when she was just six years old. Her social media suggest a troubled tween whose postings were often dark.

"Suicide people are just angels that want to go home," she reposted recently.

According to a statement from her grandparents, the girl had been diagnosed with "oppositional defiant disorder" — an illness they said affected her thinking.

"Her actions were on an impulse," they said.

They also said everyone had done their best to help her and stressed they cast no blame for her death.

Sol Mamakwa, health adviser for the Nishnawbe Aski Nation, which represents 49 Ontario First Nations communities including Wapekeka, said Friday that community leaders were exhausted. Among the immediate assistance requested were calls for 20 Canadian Rangers to come in to provide support and help from the Red Cross.

What's clear, Mamakwa said, is that something needs to change with the delivery of mental-health care, given that youngsters simply can't get the help they need.

In January, Chantell Fox, 12, killed herself two days after her friend Jolynn Winter died by suicide in the fly-in Oji-Cree community of 430 about 600 kilometres north of Thunder Bay, Ont.

On Friday, Health Minister Jane Philpott called the suicides of Jenara, Chantell and Jolynn a tragedy and said the federal government will make sure communities get human resources and financial resources to promote healing.

Last month, the Canadian Human Rights Tribunal said Ottawa's failure to fully implement Jordan's Principle —a policy that says no indigenous child should suffer denial, delay or disruption of health services available to other kids because of jurisdictional feuds — may have contributed to the suicides of two teenagers in the community.

"We have heard the concerns raised by indigenous communities and I know that we must do more to ensure that young people have the support that they need," Zimmer said in a statement this week. "The conditions that lead to despair and hopelessness are complex and multi-layered."

Zimmer said provincial and federal officials were, among other things, reviewing proposals submitted by the First Nation for a youth centre and a three-year recreational activity program for youth.