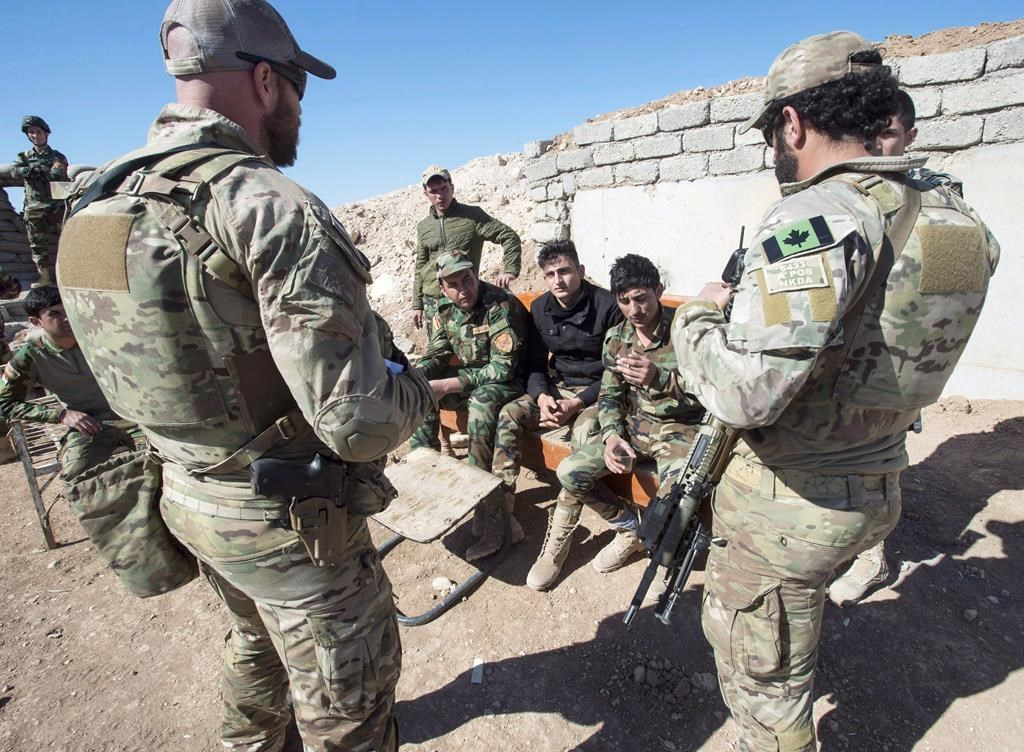 The federal government has ordered the military to stay in Iraq for at least two more years, as the fight against the Islamic State of Iraq and the Levant prepares to enter a new phase.

But despite a request from NATO for police trainers, Prime Minister Justin Trudeau says there are "absolutely no plans" to send Canadian troops back into Afghanistan.

"We have served there with distinction, with valour, over 10 years and made a significant impact," Trudeau said Thursday during an event in Charlottetown. "And Canada's looking to be helpful in other places."

Earlier in the day, the Liberal government announced it was extending Canada's mission in Iraq, where the Canadian Forces will continue to help Iraqi forces in the fight against the Islamic State group until at least March 2019.

"We know that Canada can, has and will continue to do important work in our efforts in northern Iraq," Trudeau said. "Canada has a strong role to play as part of the international coalition against terrorism."

The length of the extension is unprecedented, while the mission itself will undergo significant changes that reflect the large degree of uncertainty around what will happen in Iraq in the coming months.

After working almost exclusively with the country's Kurdish forces for the past three years, the military is being given leeway to work with different groups, such as the Iraqi military.

Defence chief Gen. Jonathan Vance is also being given flexibility in deciding what types of forces to deploy into the region, to a maximum of 850 military personnel.

The Liberal government — like the Conservatives before them — previously laid out specific requirements for the types of forces involved in the mission. The government is also adding a military transport aircraft to the mission, and estimates the overall cost of the new two-year mission at about $378 million.

Canada currently has about 200 special forces troops in northern Iraq, as well as 50 medical personnel and tactical helicopters, and a surveillance plane and air-to-air refueller based out of Kuwait.

Despite the changes, the government says the military will continue to operate within the confines of its previous "advice-and-assist" mandate, which it insists is non-combat.

But that mandate has been under the microscope for years, most recently following revelations a Canadian sniper in Iraq shot and killed an ISIL fighter from a record-breaking 3,540 metres away.

NDP Leader Tom Mulcair has said the incident, which bested the previous record for longest kill shot, is only the latest evidence that the mission involves combat, contrary to what the government says.

The decision to give the Canadian Forces more flexibility reflects the uncertainty around what will happen once ISIL is defeated in Mosul, its last major urban stronghold in Iraq.

There are fears that it will go underground and resort to traditional terror tactics such as suicide bombings, which will require different types of training from what Canada and its allies have already provided.

But the decision to expand the mission to include closer partnerships with the Iraqi military could stoke concerns following recent reports of atrocities being committed by some of those forces.

The extension also comes as tensions between Canada's Kurdish allies and Iraq's central government in Baghdad are building over the Kurds' plans to hold a referendum on independence in September.

Trudeau said Canadian officials "understand how complex the political and regional situation is in northern Iraq," but that it wouldn't detract from Canada continuing to help there.

Record-breaking sniper shot in Iraq should be celebrated, Trudeau says