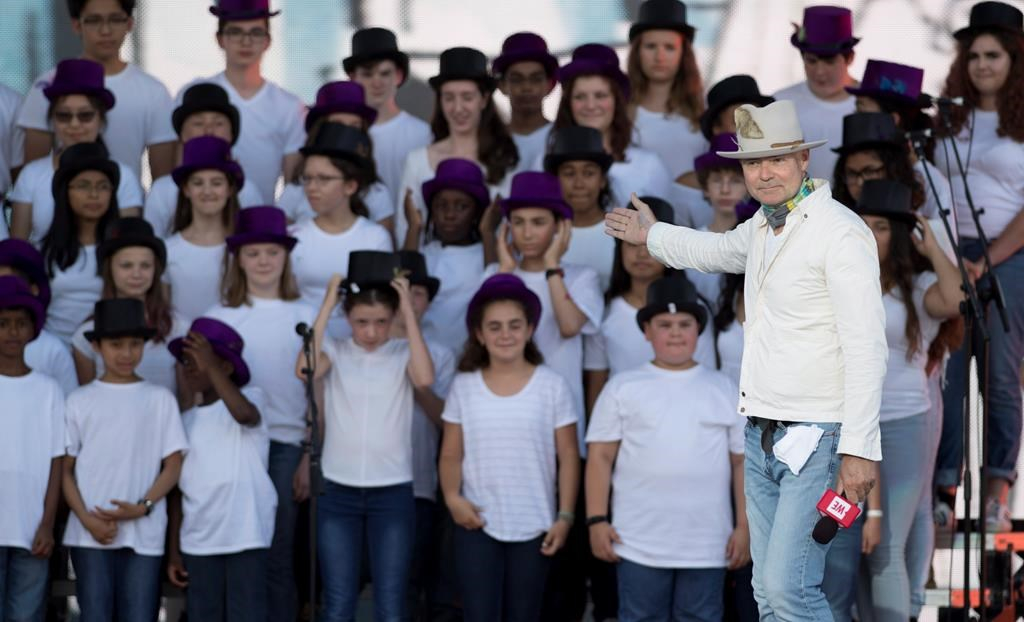 Tragically Hip frontman Gord Downie acknowledges the youth choir that performed his song, "Secret Path," at We Day on Parliament Hill, in Ottawa on Sunday, July 2, 2017. Photo by The Canadian Press/Justin Tang
Previous story
Next story

Tragically Hip frontman Gord Downie made a rare public appearance Sunday to bring attention to the ongoing plight of some of Canada's young indigenous people, likening it to the same kind of pain young people suffered in the now defunct residential schools.

He told young people gathered at festivities surrounding "We Day," the movement inspired by children's rights activist brothers Craig and Marc Kielburger, that they can learn a lot about the history of government-funded, church-run residential schools, where indigenous children endured widespread sexual, emotional and physical abuse.

Standing on the stage set up on Parliament Hill for Canada Day weekend, Downie said that indigenous children in parts of Canada still must travel great distances to go to school, likening it to "the pain, the torture and the death," suffered in the residential schools.

Indigenous leaders say children regularly leave to the nearest urban centre to get education and health care services not offered in remote communities. There have been cases where the young people have died because get caught up in risky behaviour because they lack community supports.

"It is still happening even though the residential school has gone away. Kids are still having to travel great distances to live and go to school," Downie said, with silence filling the pauses between his words.

Downie is suffering from an incurable form of brain cancer and makes few public appearances, but has used those to be a voice for the country's indigenous peoples and the harm caused by the residential school system.

One day after the country marked 150 years, Downie used his brief time on stage to speak about the "new" country that would be born in the next 150 years.

"Yours is the first generation in the new and real Canada. I love you," he said to applause.

"You and yours, the indigenous, together will make this a true country now, one true to your word. The new 150 years, not the old one. The new one. Exciting and true."

The path to reconciliation was a key theme of the Canada Day weekend in the nation's capital, which saw a group of indigenous activists erect a demonstration teepee on Parliament Hill as part of what they called a "reoccupation" to bring attention to the history of indigenous people. It was removed on Sunday.

The federal Liberals have been the focus of political heat over the party's sweeping promises to First Nations, amid increasing pressure to comply with a human rights tribunal's order to properly fund First Nations child welfare services.

On Sunday, Prime Minister Justin Trudeau told Downie and those in attendance that Canadians and their government must accept responsibility for "our failings" as the country tries to help victims and their families heal decades-old wounds.

"Gord, your work is a powerful reminder of all that still needs to be done to acknowledge one of the darkest chapters in our history and make things right with Canada's First Nations, Metis Nation, and Inuit peoples."

After Trudeau spoke, a school choir performed Downie's song "The Stranger," the lead track off his solo album Secret Path that tells the story of 12-year-old Chanie Wenjack. Wenjack died in 1966 after running away from the Cecilia Jeffrey Indian Residential School in Kenora, Ont.

Downie had previously performed the song at a "We Day" event in Toronto in October. This time, he stood to the side along with Chanie's sisters Daisy and Pearl, appearing emotional at times, and tipping his hat to the choir when they all donned sparkling purple hats similar to the one Downie wore during the Hip's last tour last year.

As the choir walked off the stage, Downie shook the singers' hands and thanked them.

Prince of Wales, Duchess of Cornwall celebrate Canada 150 in Ottawa