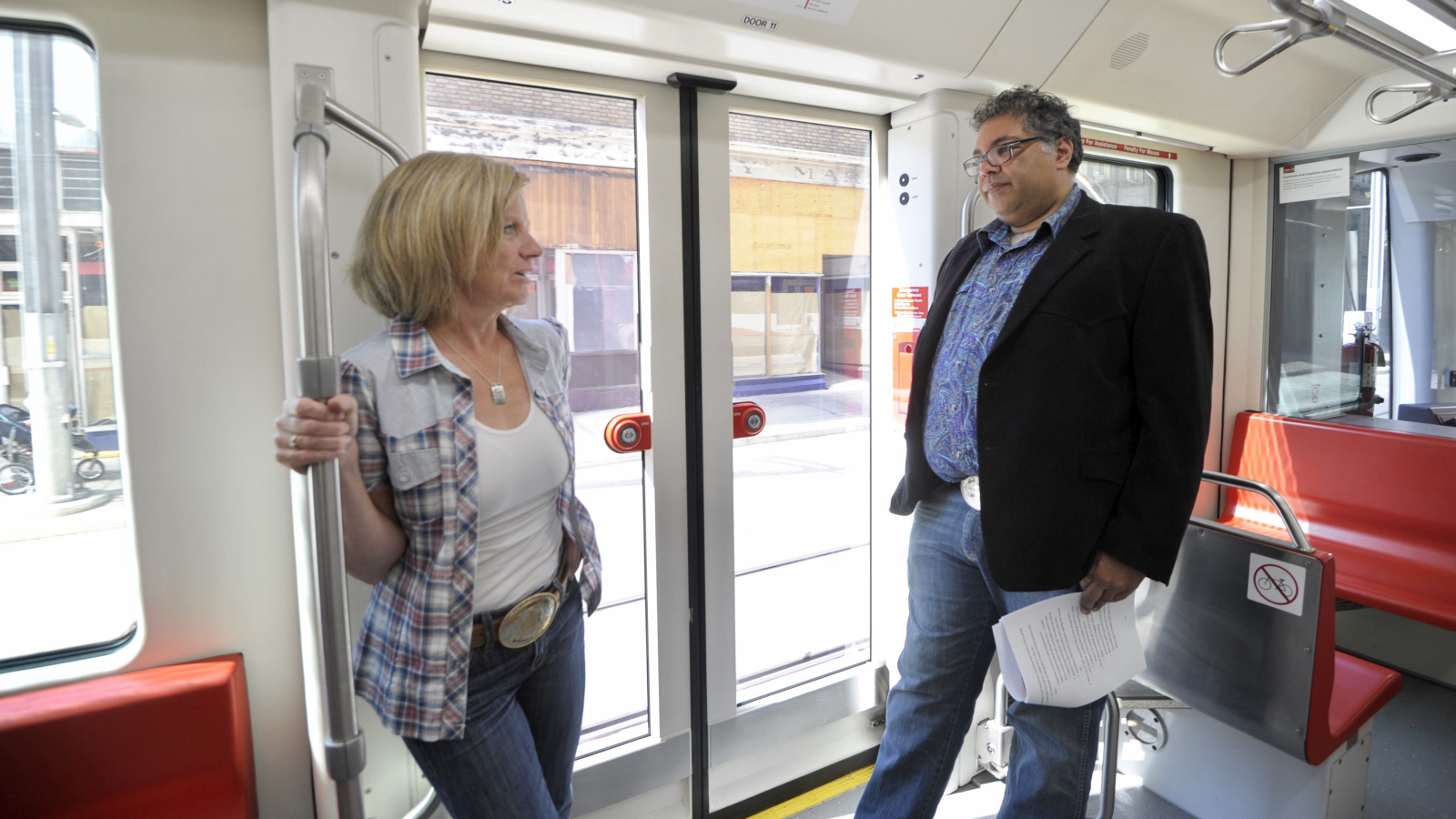 A tax on pollution in Alberta is about to provide a major boost to Calgary commuters, Premier Rachel Notley announced on Thursday.

The Alberta government will dedicate $1.53 billion over the next eight years to building a new leg of Calgary's light rail transit system, the premier said at a joint news conference in Calgary with Mayor Naheed Nenshi.

The cash will come directly from Alberta's new carbon levy — a controversial new pollution pricing that took effect in January this year.

"Every cent of it, in terms of the provincial government's contribution, is coming from the Climate Leadership (Plan), which is funded by the carbon levy," Notley told reporters at a press conference in Calgary. The long-term cash injection would be impossible, she added, without the carbon tax regime her government introduced.

Alberta's carbon levy puts a price on individuals' greenhouse gas emissions when they buy fuel, based on a rate of $20 per tonne. Albertans can also receive carbon rebates under the new system. The program has drawn criticism from constituents and opposition parties, who say it threatens jobs, economic competitiveness, and creates a tax on taxes.

According to a city map for the new Green Line, Calgary's light rail expansion will ultimately go from 160th Avenue North, "serv[ing] the northern most edge of the future community of Keystone Hills," to the far south-east communities of Seton and Cranston.

Funding announced Thursday will contribute to the first stage of the project, through the city's core.

Nenshi said the Green Line will reduce the city's greenhouse gas emissions and connect people across Calgary's communities, "reduc[ing] traffic across the city and eas[ing] the strain on our overcrowded transit infrastructure."

The idea for a southeast LRT extension has been on the to-do list for the southern Alberta city of more than 1.2 million people since the 1980s.​

Despite widespread criticism of the carbon program within Alberta, Notley said the project is, "absolutely the kind of project that we have always envisioned would flow from" the levy.

"It creates jobs, it helps with the innovation around the kind of urban planning objectives that the people in Calgary who want to grow the city know that they need to embrace, and of course it reduces emissions," she said. "It meets all the objectives that we've always outlined as critical components of our Climate Leadership Plan."

Notley dismissed a question about what would happen to the ear-marked dollars if future governments do not continue the carbon levy program.

"That's a hypothetical that I'm not going to entertain because our government's commitment is to continue to move forward with our action on reducing greenhouse gas emissions..." Notley said. "We know that's the right decision now and for the future not only of Calgary but [of] Alberta."

Alberta is expected to hold its next provincial election in 2019. New Progressive Conservative leader Jason Kenney has said that if he is elected premier, he will get rid of the carbon tax.

Notley's Climate Leadership Plan, including its carbon tax program, has been widely praised outside of Alberta. In May, The Canadian Press reported that the federal government sees Alberta's carbon tax system as a model.

Other components of Alberta's leadership plan include: "ending pollution from coal-generated electricity by 2030," "developing more renewable energy," and "capping oil sands emissions to 100 megatonnes per year."

Vote buying in Calgary, during Stampede. Ever so transparent.

Reducing emissions? 300,000 tonnes is the value used in press releases, yet, were the construction emissions calculated into this figure?

Sure sounds like a lot of emissions, but in reality, just one fracked gas well can emit this amount during the well testing event.

I think thst the Alberta

I think thst the Alberta government 's plan on extending calgary's light rail extension project is indeed a very good one. They are moving in the right direction for the city and in meeting emissions by reducing traffic. All cities should endeavour to reduce their daily car commute traffic. My criticism would be towards the 2030 target coal generated electricity. That target should be brought forward.

This is an excellent use for

This is an excellent use for the money generated by the carbon tax. Public transit is one part of greening the grid, and if we want more projects to speed the transition, we need to call Jason Kenny and other regressive conservatives on their determination to keep the production of CO2 cheap. Coal phased out by 2030???

Why not 2020? It's doable. But not if we keep wanting everything for free, and no taxes on anything. The facts on climate change are readily available. Only the mentally or ethically challenged would decide to ignore the evidence that says we have to change our way of doing things, and change quickly.

We should be asking the Alberta government to move more quickly. Instead advantaged dinosaurs in this province want to roll back a plan that is just getting us started.