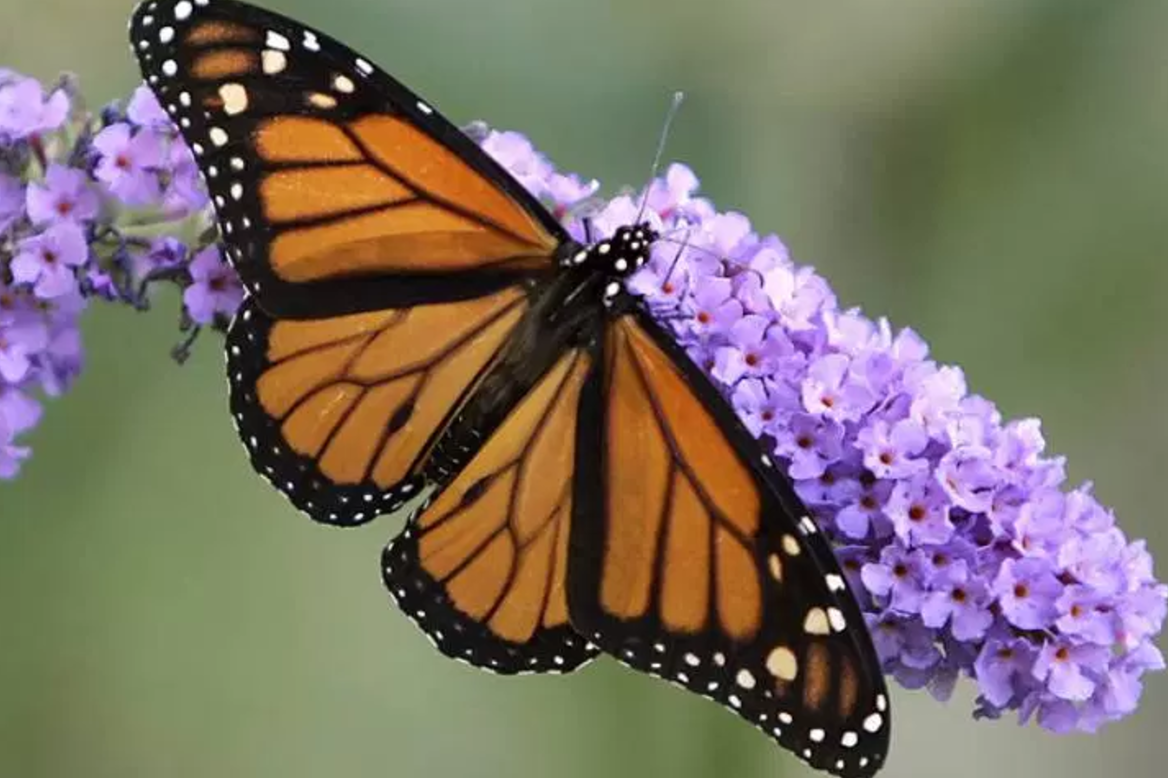 A recent study by the U.S. Geological Survey and the Scripps Institute of Oceanography has found that monarch butterflies could become extinct within 20 years. File photo by The Canadian Press
Previous story

These words have all been used to describe habitat corridors created to help pollinating species like bees and butterflies. Now, we can add 'Butterflyways' to the list.

These volunteers learned how to help local pollinators flourish. They returned to their neighbourhoods with a mission: create a local Butterflyway by planting at least a dozen pollinator patches filled with native wildflowers that support these essential critters.

What happened next is inspiring. Rangers in each city connected with local gardening and horticulture groups, businesses, municipal councillors and parks staff, teachers and daycares. They attended community events and hatched plans to establish new butterfly gardens in parks, schools and yards.

Once they began seeding these ideas, it took little time for the Butterflyways to begin blooming.

In May and June, activities ranged from creating butterfly-themed costumes and a bike-trailer garden that won second prize in a Victoria parade, to adopting city parks in Richmond. In Markham and Toronto, Rangers built on a project started through the foundation’s Homegrown National Park Project, installing a dozen wildflower-filled canoes in parks, schools and daycares. In Toronto’s west end, a pair of Rangers led the Butterflyway Lane art project, painting butterfly-themed murals on two dozen garage doors, walls and fences in a laneway facing Garrison Creek Park.

In late June, Toronto’s Beaches neighbourhood and Richmond, B.C. surpassed the target of a dozen Ranger-led plantings, earning kudos from the foundation for creating Canada’s first Butterflyways. The project is spreading, with neighbouring city councillors and groups clamouring to get their own Butterflyways.

Parading around as Rangers and planting wildflowers can be a fun way to engage communities and celebrate nature, but the project’s conservation potential is equally intriguing.

Reproduction for about 90 per cent of flowering plant species depends on pollinators, from bees and butterflies to hummingbirds and bats. We have pollinators to thank for one of every three bites of food we eat. Sadly, threats like development, pesticides and climate change are dramatically reducing pollinator diversity and numbers.

A 2016 United Nations report found 40 per cent of all insect pollinators worldwide are under threat. More than 50 butterfly and moth species and a quarter of all bumblebee species in North America are threatened, and six species of native bees await protection under Canada’s Species at Risk Act.

Although Canada’s more than 300 butterfly species aren’t as diligent pollinators as other species, they play other essential ecological roles, like becoming bird food. The plight of perhaps the most iconic butterfly in North America, the monarch, is well documented. Its numbers have dropped by more than 90 per cent over the past two decades.

Dwindling bee and butterfly numbers should be a compelling enough reason for action, but the story of Canada’s pollinators is complicated by the European honeybee. It’s an introduced species, managed like livestock. They’re good pollinators, but many of Canada’s native bees are more effective — yet they fly largely under the radar.

A recent poll revealed about two-thirds of Canadians couldn’t name a single native bee, even though Canada has more than 800 species, dozens of which are found in most backyards — including carpenter, mining, sweat and mason bees. They don’t produce honey or live in hives, and are unlikely to sting humans, but they’re essential pollinators.

We can help these beneficial critters by providing habitat throughout the places we live, work and play. Like the Butterflyway Rangers, re-imagine your neighbourhood as a habitat highway for butterflies and bees. Encourage neighbours to add pollinator patches to yards and gardens. Create butterfly gardens at schools and daycares. Add pollinator patches to local parks and naturalize areas that park staff find difficult to maintain, like steep slopes or wet areas. Businesses can replace exotic flowers and shrubs with native equivalents.

Thread these patches together and you have the beginnings of your own Butterflyway.

In the meantime, join me in celebrating the efforts of the Rangers, and the start of what I hope will be an inspiring national project to bring butterflies and bees to neighbourhoods throughout the country.

I have a huge garden packed

I have a huge garden packed with variety, much of it flowering right now. Normally it is just buzzing with insects, hummingbirds and small visiting songbirds. Open windows carry their songs through the house. This year is absolutely frightening for the silence. No hummingbirds, butterflies or songbirds (just the perennial sparrows and chickadees). One lonely bumble bee has been trying valiantly for weeks to get to all the flowers, but has no help. I use no chemicals, provide water, and stay out of the beds during prime feeding hours. Mostly I wait and listen with increasing dread about neonicotinoids killing insects, birds and aquatic species. The mass slaughter of birds and bats by wind turbines is something else needing to be investigated, discussed and stopped before it is too late for them.