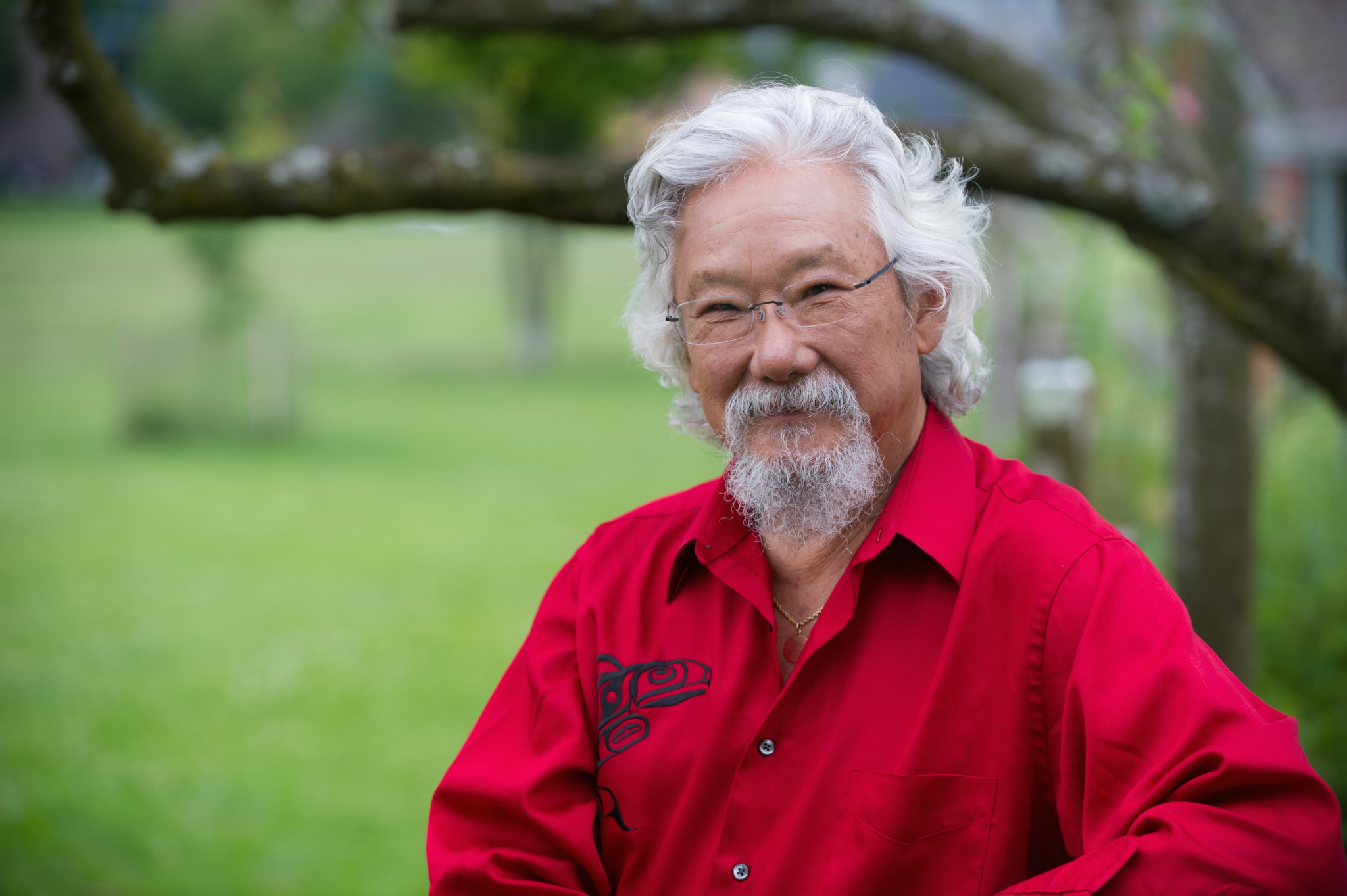 David Suzuki is not impressed with the state of climate leadership in Canada and is calling on journalists to hold the government to account. Photo courtesy of the David Suzuki Foundation
Previous story
Next story

David Suzuki cuts straight to the chase. The state of Canada’s climate action is “disgusting,” he says, and the federal government should be ashamed.

“Canada should hang its head,” he told National Observer in an interview. “(Trudeau) has given no indication that he was serious about the promise made at Paris.”

It’s a typically frank assessment by the 81-year-old star environmentalist, scientist and broadcaster. In 2015, he famously called Justin Trudeau a “twerp” during a phone call about the Liberal climate change platform, after Trudeau reportedly indicated that his comments were “sanctimonious crap.”

As Trudeau’s Liberals today cling to widely-criticized Harper-era climate change targets and continue to approve new oilsands pipelines, Suzuki says countries like Sweden, Morocco and Costa Rica are blazing ahead in climate leadership. Even India and China, two of the world’s biggest emitters of heat-trapping carbon pollution, are leaders in wind and solar investment — statistics that put Canada to shame, he says.

“We’re using the earth as a garbage can and we’re going to pay a huge consequence of that," Suzuki fired over the phone. "The very life support systems of earth are being sacrificed all in the name of economic development."

The scientist's comments are at odds with the Trudeau government's mantra that the environment and economy "go together," and that a balance can be struck between getting Canadian oil to tidewater and cutting down on heat-trapping carbon pollution. Responding to Suzuki's criticism, Environment and Climate Change Minister Catherine McKenna said she’s “extraordinarily proud” of what the federal government has accomplished on climate change.

“We have an incredible climate change plan that includes putting a price on carbon pollution, also investing in clean innovation,” McKenna told National Observer. “But we also know we need to get our natural resources to market and we’re doing both. That’s what Canadians expect us to do.”

Since 2015, the federal government has adopted a historic Pan-Canadian Framework of Clean Growth and Climate Change, along with plans to run all federal buildings on renewable energy by 2025. Budget 2017 also included $200 million over four years to bring clean tech to Canada’s natural resource sectors, and more than $1 billion to help Canadian clean tech companies expand.

Such efforts are overshadowed however, by the approval of unsustainable development projects that put land and water at risk, said Suzuki. In November last year, the Trudeau government approved two controversial oilsands expansion pipelines: the Kinder Morgan Trans Mountain expansion and Enbridge Line 3.

Oil is the "dirtiest energy we've got," he told National Observer, adding that there's no such thing as "world class" ability to clean up after an oil spill.

McKenna's department has described the oilsands industry as the country's fastest growing source of greenhouse gas emissions. The sector's emissions, however, would be capped under a new framework introduced by Alberta Premier Rachel Notley's government. Even under the NDP's so-called "Climate Leadership Plan", however, annual emissions would still be allowed to grow by 43 per cent.

But for Suzuki, the $8.8-billion Site C Dam, currently under construction in British Columbia, is Canada's "classic example" of where government priorities lie. Upon completion, it will produce enough power to light up roughly 450,000 B.C. homes per year, but is expected to destroy more than 100 kilometres of river valley bottoms along the Peace River and its tributaries.

"We know that with climate change, we cannot have a food system where food is growing an average of 3,000 miles from where it’s grown to where it’s eaten," he explained. "The Peace River Valley is one of the real bread baskets of the north...We’ve got to use that to be the bread basket of the world and instead, we’re going to flood it and contribute to the basic problem."

Suzuki credited the Trudeau government for putting climate action “back on the table” after a decade of denial from the Harper government and said in the first year, Trudeau's progress was "amazing." Today, the prime minister's climate portfolio is still far from demonstrating "the real action that is needed now."

And as glaciers melt into the ocean, sea levels continue to rise, and droughts strike in full force, Suzuki called on journalists to hold governments accountable for their commitments to the race against climate change.

According to Suzuki, Canada should react to climate change the way the world reacted when Japan attacked Pearl Harbor in 1941:

“When they attacked, nobody said, ‘Oh my god, we can’t afford to fight these guys, we better make peace with them in the Pacific.’ You knew that you were drawn into a battle and you had to throw everything you could at it, because the only possibility you could accept was victory.”

As it stands, no legislation or organization has the authority to impose sanctions on a government for failing to meet its climate obligations. Such a body would be "ideal," he said, but given that none exist, journalists must put their elected officials' feet to the fire. It's a tall order, Suzuki acknowledged, in a world where infinite information is available online, and 'fake news' and 'alternative facts' run rampant.

The new world of online information means the public must not only learn to be critical of the information it consumes, he said, but also that the media must learn to present climate reporting in a way that it engages a modern audience. After all, it has to compete with reality TV socialites Kim Kardashian and Paris Hilton, he added, questioning "how the hell" such individuals capture our attention.

"As long as we’re focused on celebrity and economics, we’re not going to see the world in a way that allows us to live and thrive," he said.

In Suzuki's ideal world, instead of reporting daily on the stock market and the value of the loonie to four decimal points, Canadian media would report daily on how many acres of ancient forest are being torn down, how many tonnes of pesticides have been sprayed, and how much carbon has been dumped into the atmosphere.

"Why don’t you at least give us an indicator of what we’re doing to the planet?” he asked. “We don’t do that. Our priorities are indicated by things like the Dow Jones average and all that crap.

"I believe that the more better information people had, the better decisions they would make. That’s always been my drive in television — give people the best scientific information available so that they can make more informed decisions.”

Suzuki was recently in Ottawa to accept a lifetime leadership award in animal welfare at the Canadian Federation of Humane Societies' National Animal Welfare Conference.

Ever since I watched a

Ever since I watched a documentary in the 1980's when Suzuki and his team seemed to abandon a kitten to die at an abandoned Arctic or Antarctic site, citing "nature taking its course" after humankind brought the kitten to the site, I have not taken any of this man's pronouncements seriously. While I believe in and regret our impact on climate and accept that we need to make changes, Suzuki tends to take an extreme and unrealistic stance on climate change.

I agree with David Suzuki

I agree with David Suzuki that we have to take climate change very seriously because Canada's landmass, especially Canada's peatland ecosystem, stores a lot of carbon that will be release as the climate in the North is getting warmer as a result of a changing climate.
According to "Canada's Sixth National Communication and First Biennial Report on Climate Change for 2014" to the UNFCCC, the annual average surface air temperature over Canada's landmass warmed by about 1.7ºC between 1948 and 2102, approximately twice the global average. Northern Canada (north of 60º latitude) has warmed at a rate approximately 2.5 times the global average since the late 1940's.
The combined Boreal and Subarctic regions contain 97% of the soil organic carbon mass occurring in Canadian peatlands, and 59% of all stored carbon in Canada. It is estimated that this mass contain around 142.94 Gt (billion tons) of organic carbon. Peatland sensitivity model indicates that approximately 52% (74.16 Gt) of the organic carbon mass in these two regions will be "severely to extremely severely" affected by climate change. An increase in temperature due to global climate change has the potential to thaw this carbon and release it into the atmosphere.
As the average air temperature over Canada's landmass is getting warmer, forest fires have intensified. Forest fires burned an average of more than 2 million hectares (ha) each year in Canada (this is twice the average area burned in the early 1970's). In 2104, a total of 5,126 forest fires burned about 4.6 million ha in Canada; around 3 million of those burned hectares were in the Northwest Territories. Preliminary estimates suggest that peat fires across western Canada emit about 6 Mt (million metric tons) of carbon annually, while fires across Canada as a whole emit about 27 Mt (in 2014, emissions from wildfires were 175 Mt resulting in a "net carbon source" of around 72 Mt, which, if included, would have increase the total Canadian GHG emissions by about 9.8%). This means that peat fires are already contributing significantly to carbon emissions in Canada. Deep-burning peat fires have the potential for even higher emissions, as the carbon density of peat increases exponentially with depth (peat fires are difficult to extinguish and can last for months, even burning throughout the winter under the snow layer.
Considering the enormous amount of carbon stored in Canada's peatlands that has the potential to be released in the atmosphere as the average temperature in northern Canada is getting warmer, we should be very worried. Peat fires not only release significant amounts of carbon dioxide and other greenhouse gases, it also release mercury in the atmosphere at a rate 15 times greater than upland forests, which may be a serious human health concern.
(sources: Natural Resources Canada: "Peatland Fires and Carbon Emissions" (2013-12-04)
Natural Resources Canada: "Carbon Emissions/Removals in Canada's Managed Forests" (2013-12-04)
Natural Resources Canada: "The State of Canada's Forests 2015"
Agriculture & Agri-Food Canada: "Peatland Sensitivity od Canadian Peatlands", Charles Tarmocai,
Canadian Water Resources Journal, May 2009