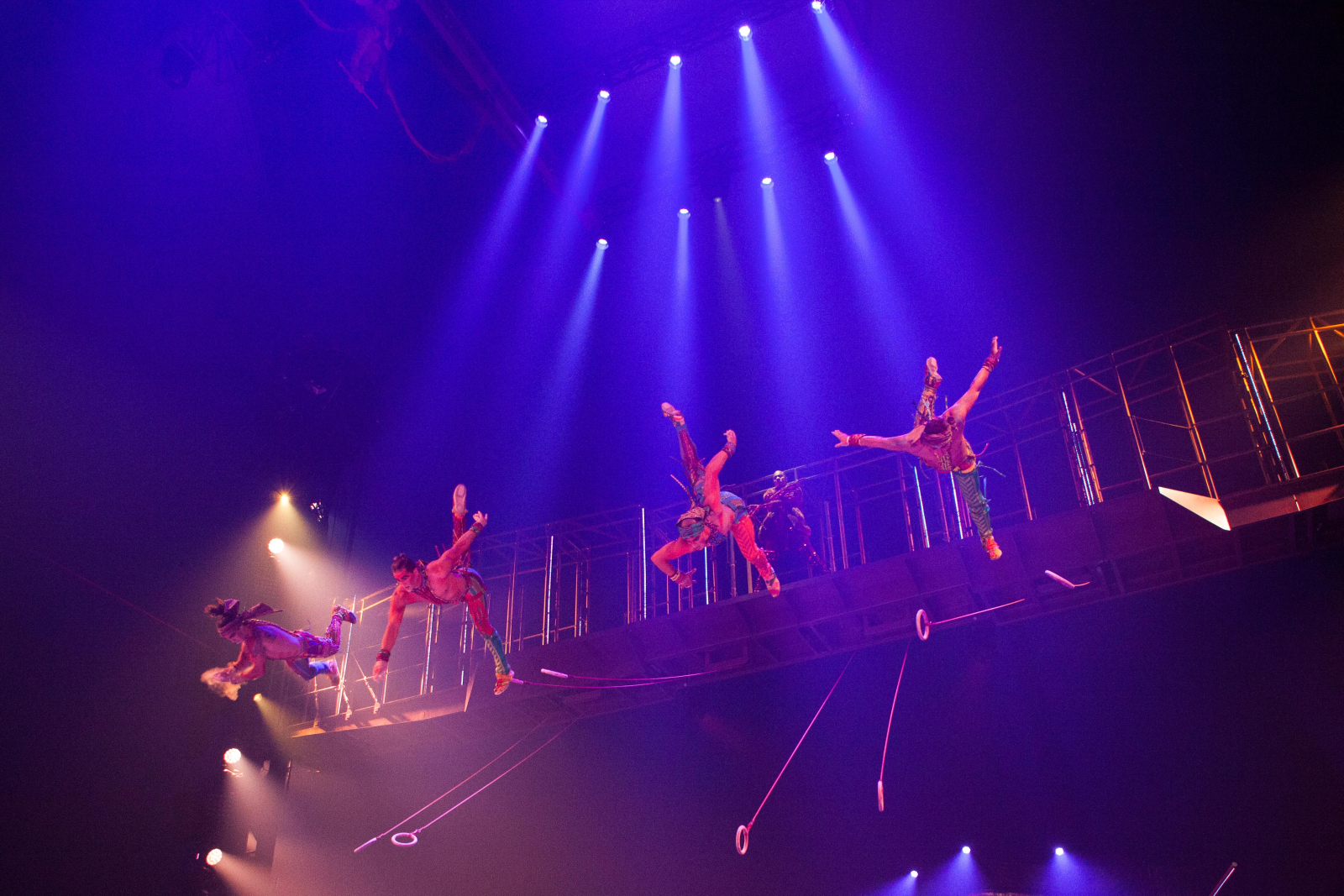 Fully integrated in the show, the main singer, Darius Harper, sometimes reminiscent of an edgy Seal, performs while acrobats on rings launch into the air to land on the stage. Photo by Alex Tétreault

After a stop in Montreal, Cirque du Soleil's road show Volta set up shop in Gatineau for the month of August, at Zibi Site.

Story and images by Alex Tétreault

The show officially opened this week. I went to their final rehearsal Aug. 2 to take a sneak peak.

There was electricity in the air as the crowd took their seats for the show. It was an audience of all ages for the festivities — the latest big event to hit Ottawa as the city celebrates the 150th anniversary of the British North America Act coming into force.

Waz, performed by Joey Arrigo, is the main character of the story. He takes the crowd on a soul-searching journey.

Storywise, Volta reminds me of some popular dystopian tales about the future, not unlike Hunger Games or the Divergent series.

In the show, society is separated into three distinct castes. As explained in Volta press material, one caste represents the “everyman, city dwellers who have accumulated the dust of inertia over time.”

Basically, the huddled masses are too busy with the daily grind of life to do anything to change society. They have no aspirations other than to become the elites. Then you have the elites, “conformists who look down on the greys”, and finally, the free spirits, “real and genuine, always seeking to fulfill their potential and that of others.”

Does any of this ring a bell?

In any case, the premise of the show is… a show, a television show where contestants—the greys, compete to become the next instant elite. The show is hosted by Waz, the ultimate elite, and his sidekick Shood Kood Wood, who serves as an MC (but pretty well the show’s clown).

We follow Waz as he experiences a crisis of conscience after the 1000th show, and he begins a dark descent that is fueled by doubts and a desire to reconnect with reality.

Will he bring the system crashing down with him? 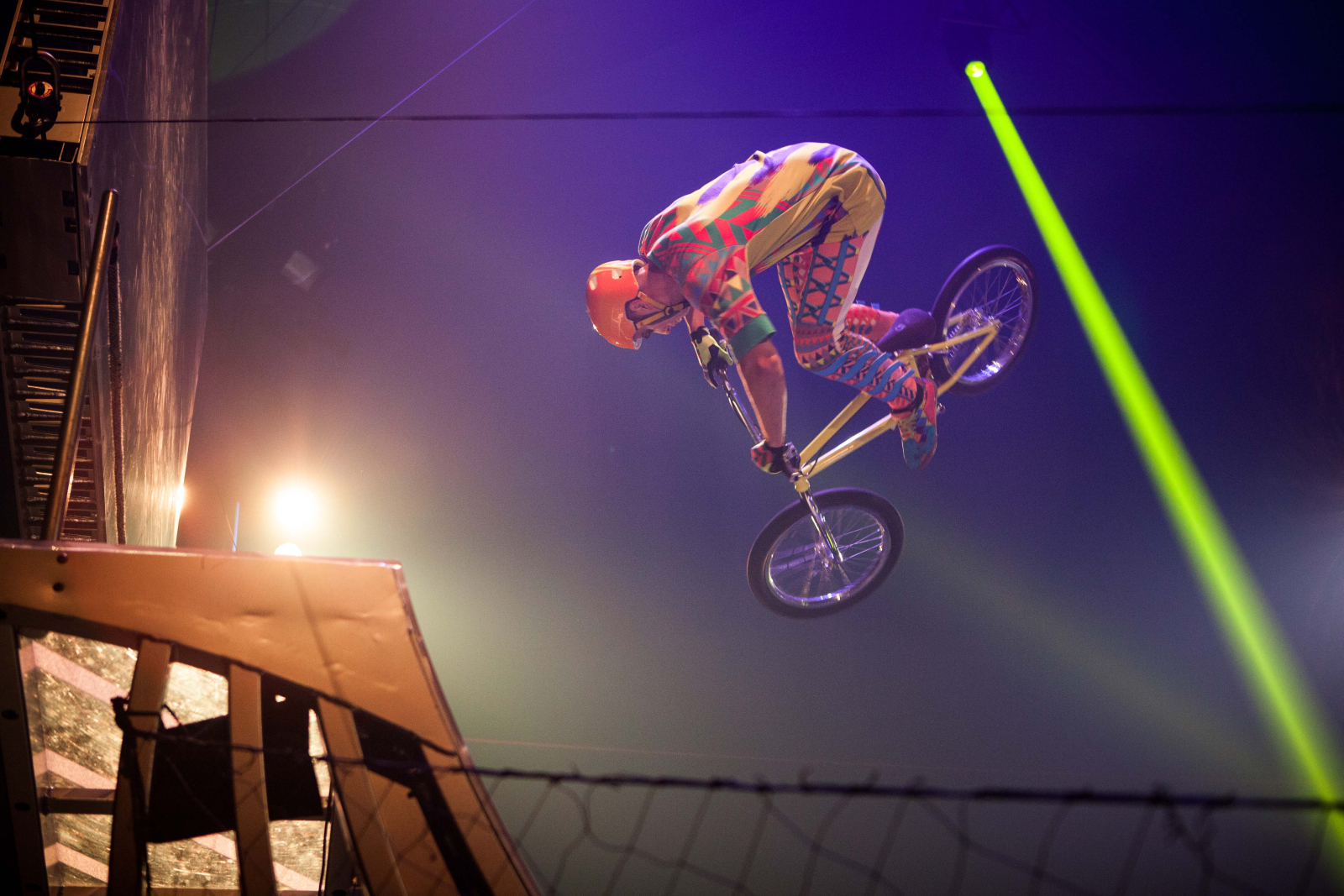 A full BMX skate park is set up on stage for the final act. Photo by Alex Tétreault

Perhaps it was inspired by the Harlem Globe Trotters? This part of the act sees free spirit Michael Van Beek skillfully control the basketball. He spins it on the tip of his toes, in stark contrast to the greys.

I’m no Cirque connoisseur, but I found the show entertaining.

The Cirque fully incorporates entire acts dedicated to emerging sports such as parkour, and other more well-known but still edgy sports, such as BMX and mountain bike riding, as well as roller skating. This makes for an eclectic mix of new acts alongside classic Cirque ones. The bright palette of colours and straight-up fun acts are bound to please the entire family, including the little ones.

Although, at $40 a ticket, the bill adds up quickly.

Here’s a tip if you’re in town and want to go see it: try to walk, bike or bus. You’ll avoid the ‘exit’ line-up after the show, and paying $20 to park if you do get a spot. The parking payment system is automated, so if you do drive, and do find a spot to park, you might also wait for a long time in a line up for the machine.

It is easy to walk to the site from downtown Ottawa or the Canadian War Museum. STO also has a special shuttle bus service from the Centre Robert-Guertin park-and-ride. 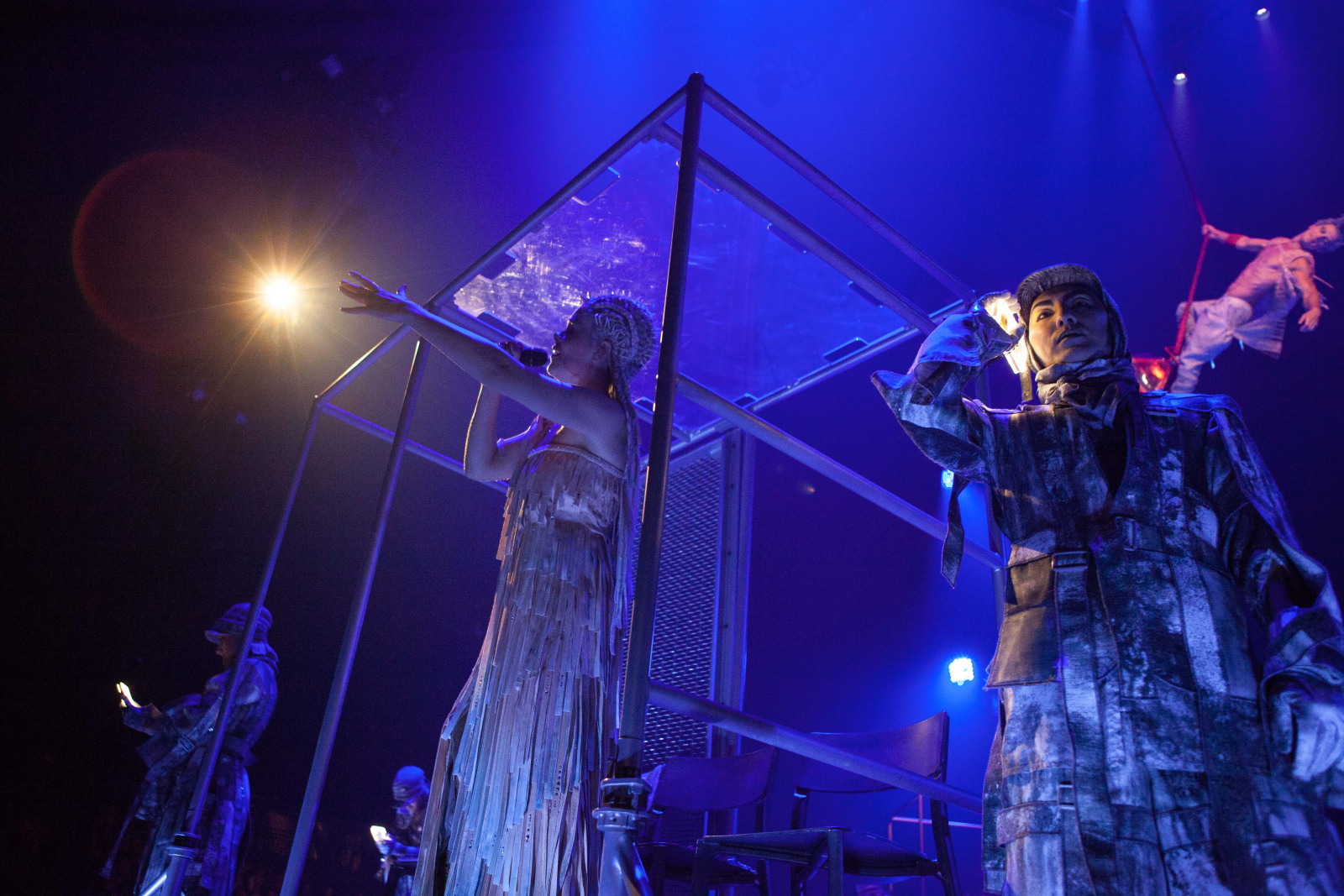 Volta has action, music and an avalanche of colours. The musicians were often on stage alongside the acrobats and other performers, with music written by French composer Anthony Gonzales of M83 fame.

Music is an integral part of the show. Throughout the performance, the musicians tend to share the same stage as the other performers. The music covers a wide range of styles, "from synth-pop to more melodic lines, from ambient shoegazing to waves of symphonic and orchestral sounds to which stirring choirs, brass and string textures were added."

It allows the performers to showcase the full range of their talent. 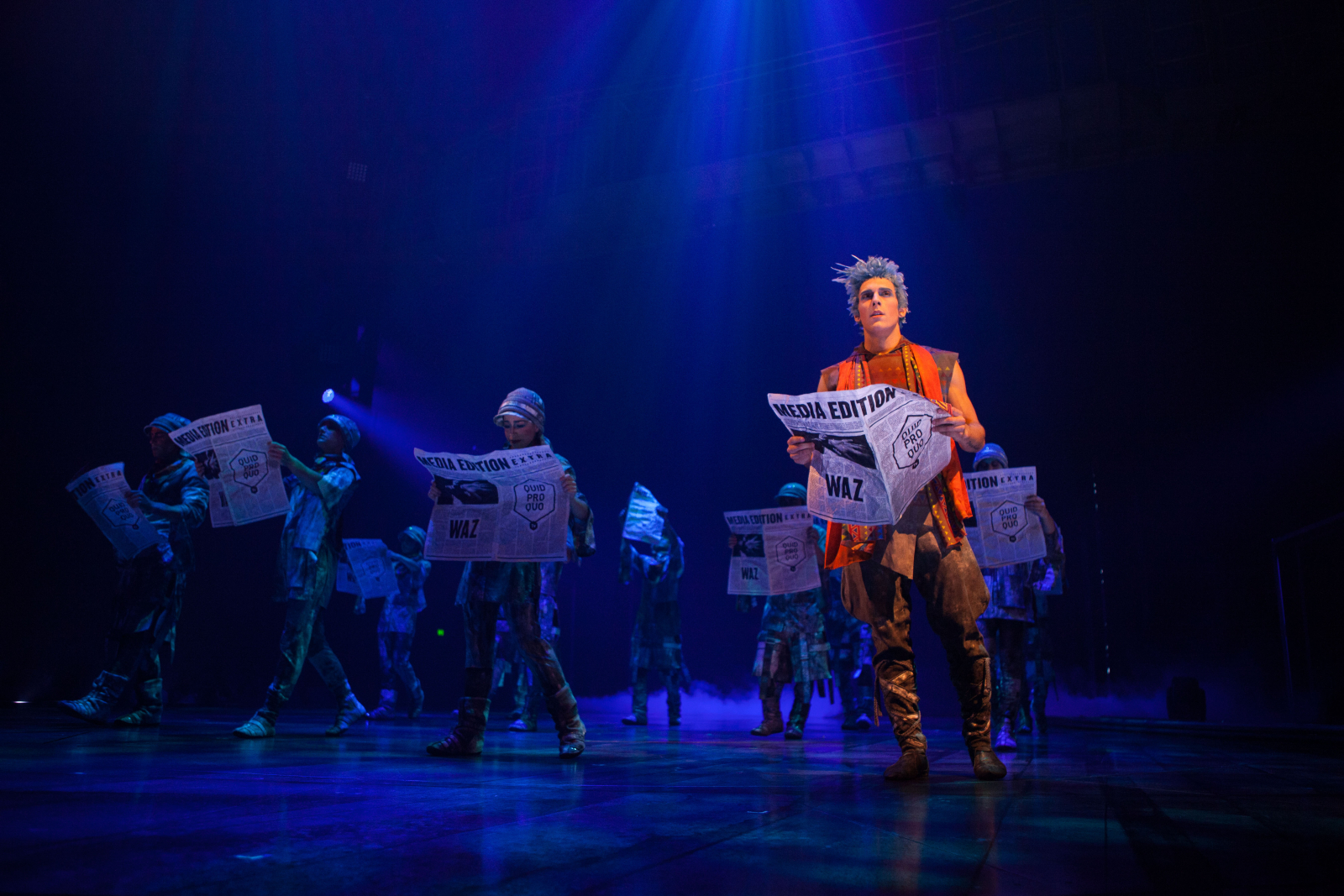 Our main character, Waz (Joey Arrigo), walks a path away from conformity, heading to a place where he can reconnect with his true self. Photo by Alex Tétreault

Obviously, not many people go to see a Cirque show for a deep story.

But a well written and contemporary performance with a message is a bonus. The not-so-subtle critique of society—drawing parallels between the public’s obsession with reality television, tablets and smartphones, then stretching these out to near-dystopia—is refreshing to see in this format. 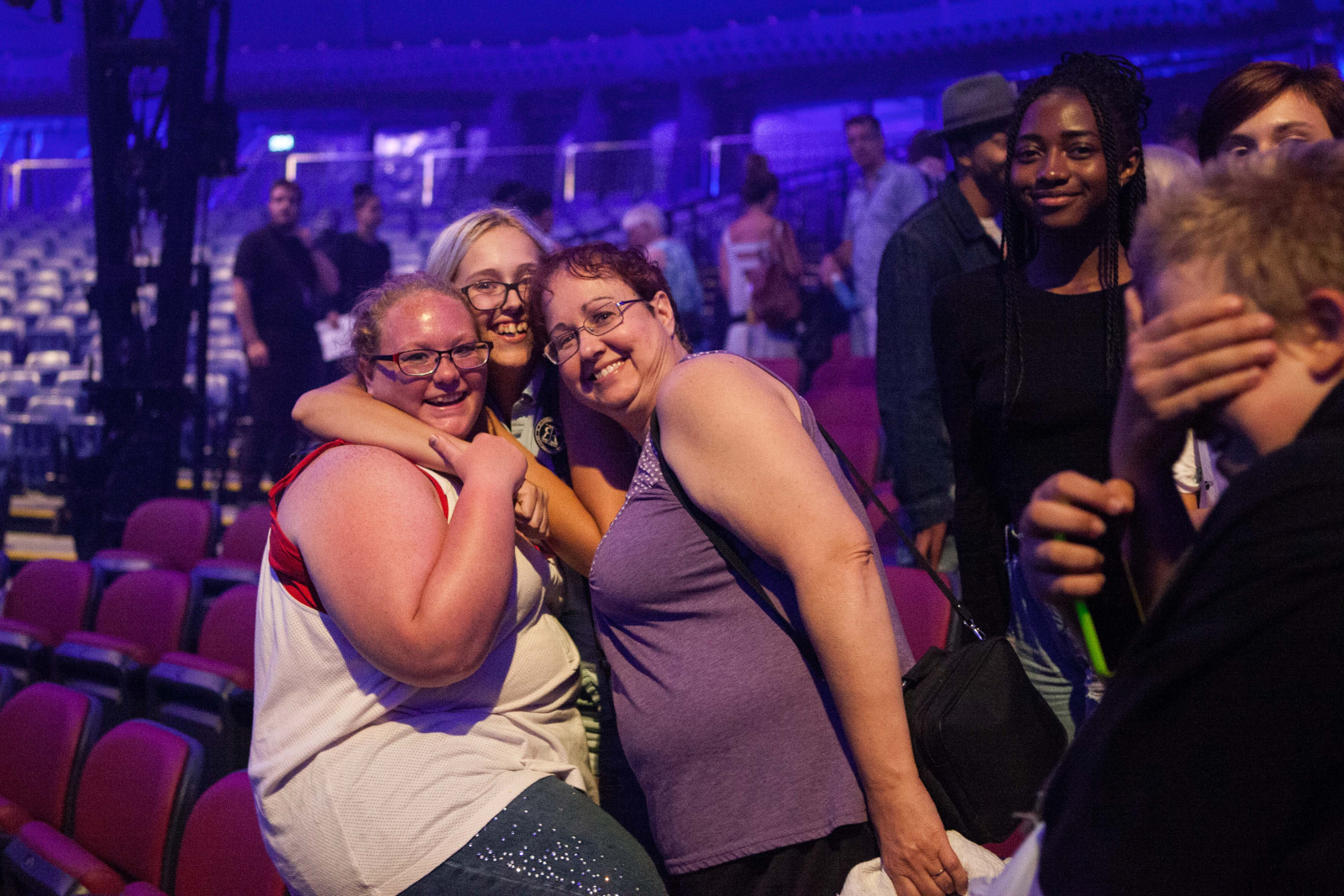 A staff member from one of the youth centres, with two youth from the centre, after the show. Youth centres across Gatineau were given 85 tickets from Cirque du Soleil, and they had a blast. Photo by Alex Tétreault

While the press was sitting up front, right behind us were rather loud teenage girls who were clearly having a great time.

They became known as the “OMG Girls,” and they were absolutely psyched at the end of the show when the performers got off stage and waded into the crowd — even more so when one of the stars leaned in for some high-fives.

I soon discovered that these screaming Cirque fans were part of an organized group.

I checked in with their chaperone, and it turns out that they were from youth centres across the Gatineau area, including La Pointe aux Jeune in Gatineau, Prévention César in Papineauville, Saga Jeunesse in Gatineau and Manijeune in Maniwaki.

I spoke with Anne Boutin, director at La Pointe aux Jeunes, who told me that Cirque du Soleil approached her unsolicited and offered 85 tickets to the rehearsal for the region’s youth centres. Ms. Boutin distributed them among the various youth centres.

"These kids would’ve never been able to afford this otherwise, and well, as you heard, it clearly made their day," said Boutin, who coined the "OMG Girls" nickname. 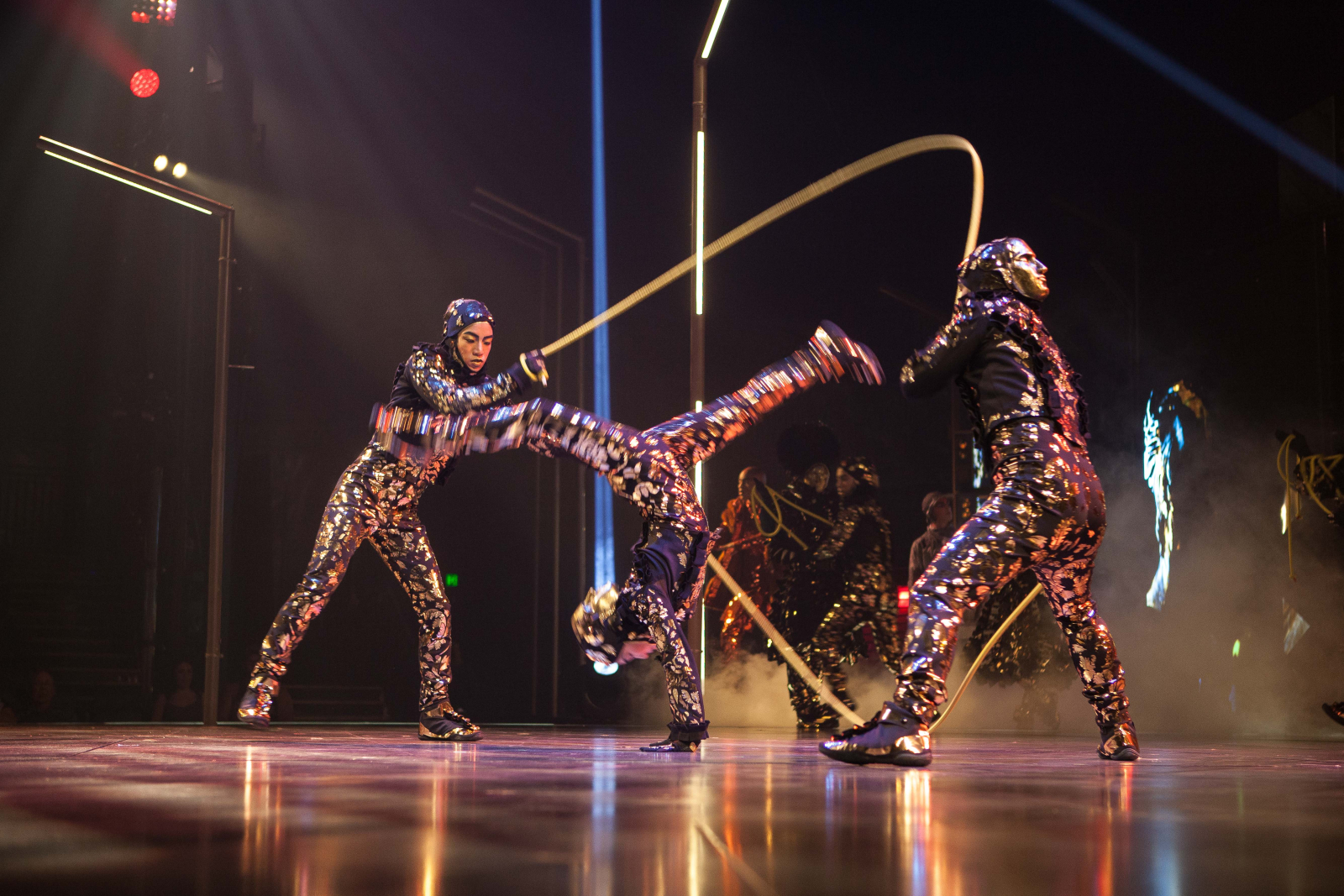 This trial rider, Trevor Bodogh, performs alongside BMX riders and a roller skate dancer for some balancing and acrobatic feats on the morphing stage, where beams of light rise from the centre.

Cirque du Soleil’s Volta, in Hull, runs until the Aug. 27. It’s a bit on the pricey side, but probably an evening you won’t forget.

After that, it moves to Toronto from Sept. 7 to Nov. 12, before moving to Miami and Tampa this winter.

Here are more sights from the act for your previewing pleasure.