A video released by the city of Gatineau, Q.C., shows the activities that city services are doing to cope with the flood. City of Gatineau Video

Little Mackenzie was out for a walk with his mother when he saw something he doesn't see every day.

There were some real soldiers in his neighbourhood and he was psyched. He ran towards Corporal Martin Hébert and exclaimed "are you guys doing ok"?

There were smiles all around.

Mackenzie was in Gatineau, one of the cities hardest hit by major flooding in central Canada following days of heavy April rain.

Rivers and lakes between Gatineau and Montreal are currently at 50−year peak levels, flooding more than 4,100 residences and forcing 3,000 people from their homes. Hundreds more are affected in Ontario communities along the Ottawa River.

Scientists say that these types of events are becoming more frequent because of climate change and that human activity is contributing to the problem.

The Canadian military was deployed to provide some relief at the heart of the disaster zone. 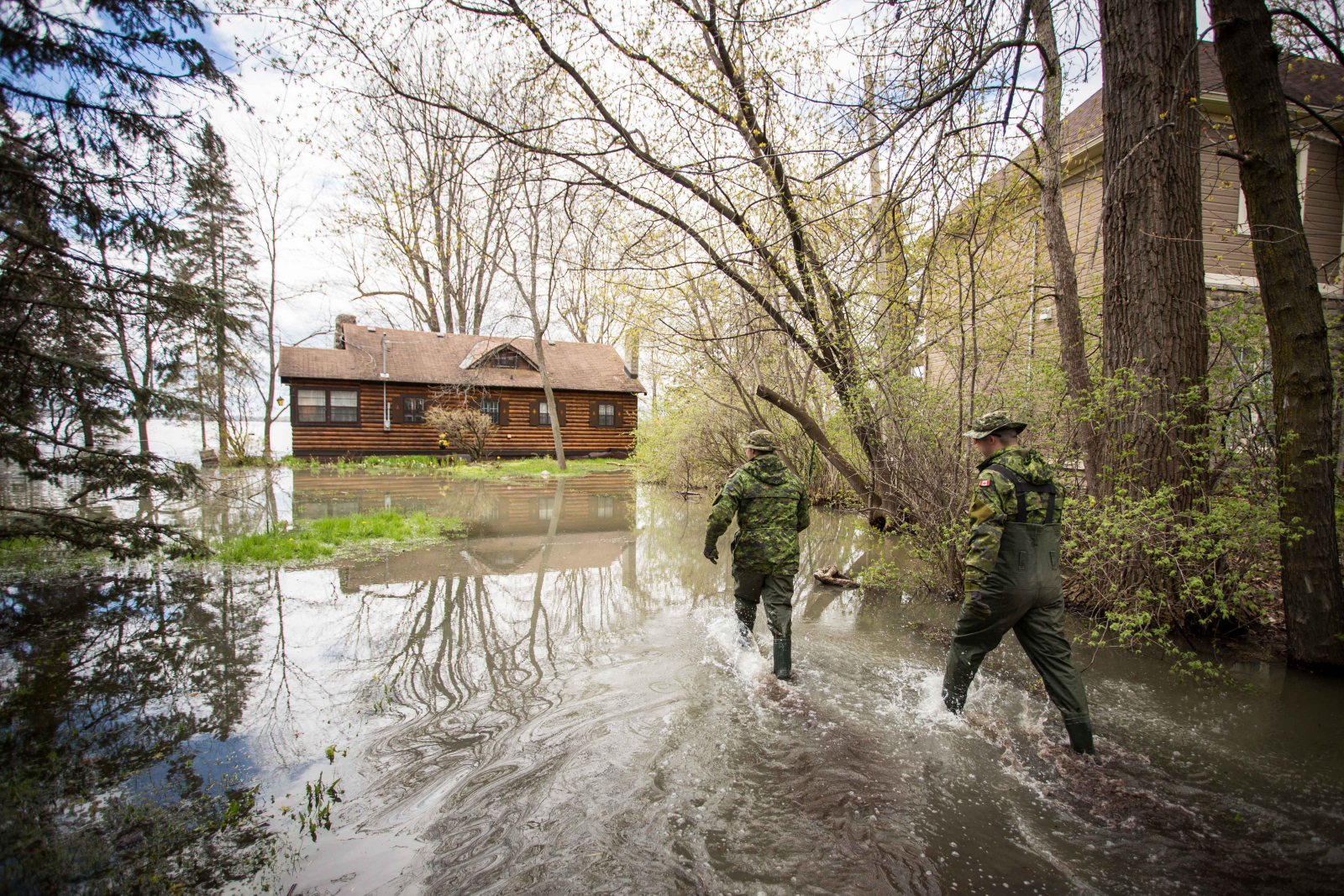 This brown wood house was completely surrounded by water. Corporal Jérôme Esculier and Trooper Raphaël Métivier waded through to knock on its doors and inspect it. No one was home as the owners had likely been evacuated earlier. Photo by Alex Tétreault

I ran into little Mackenzie while riding along with Canadian Forces members on Wednesday.

It was the third time I returned to watch the unfolding disaster in Gatineau. Initially, I toured the flooded areas on the east side of Gatineau two weeks ago. Then I went over to the west side this past Monday. But this time was different.

As the Ottawa River crested and the flood waters started to slowly recede last Tuesday, it seemed like the worst was over. There was no longer a pressing need for volunteers to help with relief, the City of Gatineau said.

I could see the sun poking through the clouds early in the morning. The troops had moved in to help a few days earlier on Saturday, and there was still some work to be done. Local officials have warned that it could take weeks before the river returns to its bed. 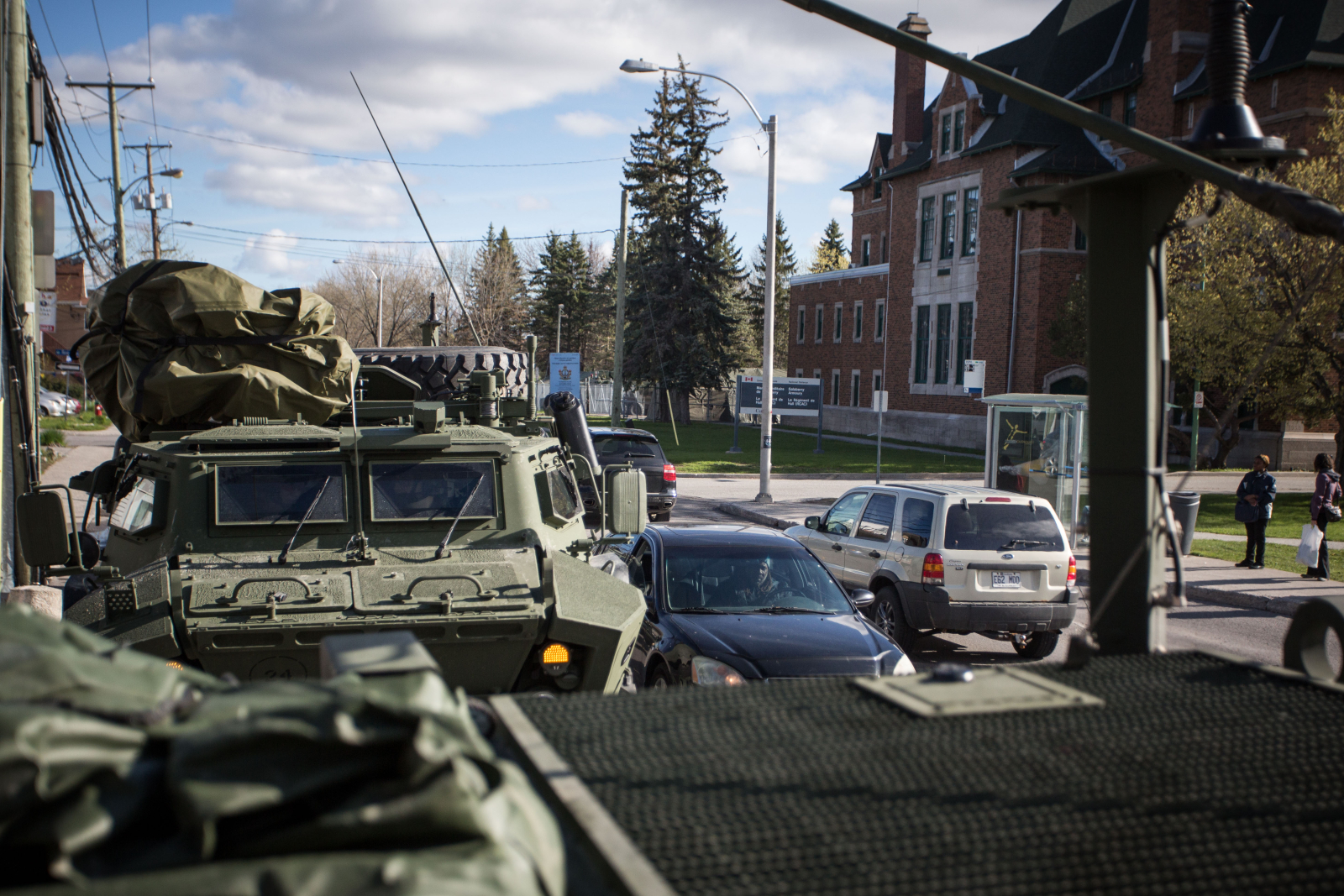 The Régiment de Hull's armoury is located near the core of Hull, a borough of the city of Gatineau. Photo by Alex Tétreault

The military accepted my request to accompany them on their mission on Wednesday.

So off I went at sunrise to the local armoury of the Hull Regiment, where a large chunk of the Operation LENTUS troops were stationed.

There I met Captain Fitzgerald for a quick run down of the situation, but he quickly handed me over to Warrant Officer Frédérick Denis, the leader of troop callsign 42 (pronounced four two), which I'd be spending the day with. He took me outside to the parking lot to meet the rest of the group which was eager to show me their brand new armoured vehicle, the TAPV, recently acquired by the Forces. This operation is technically the vehicle's very first.

Warrant Officer Frédérick Denis explained what was on the day's menu. The soldiers were to head out west from the armoury towards Aylmer, patrol the streets along the river, go door-to-door and assess the evolving situation.

They gave me a seat, a helmet (safety first!), and showed where I could poke my head outside of the vehicle to take pictures — or just enjoy the ride. And off we went. 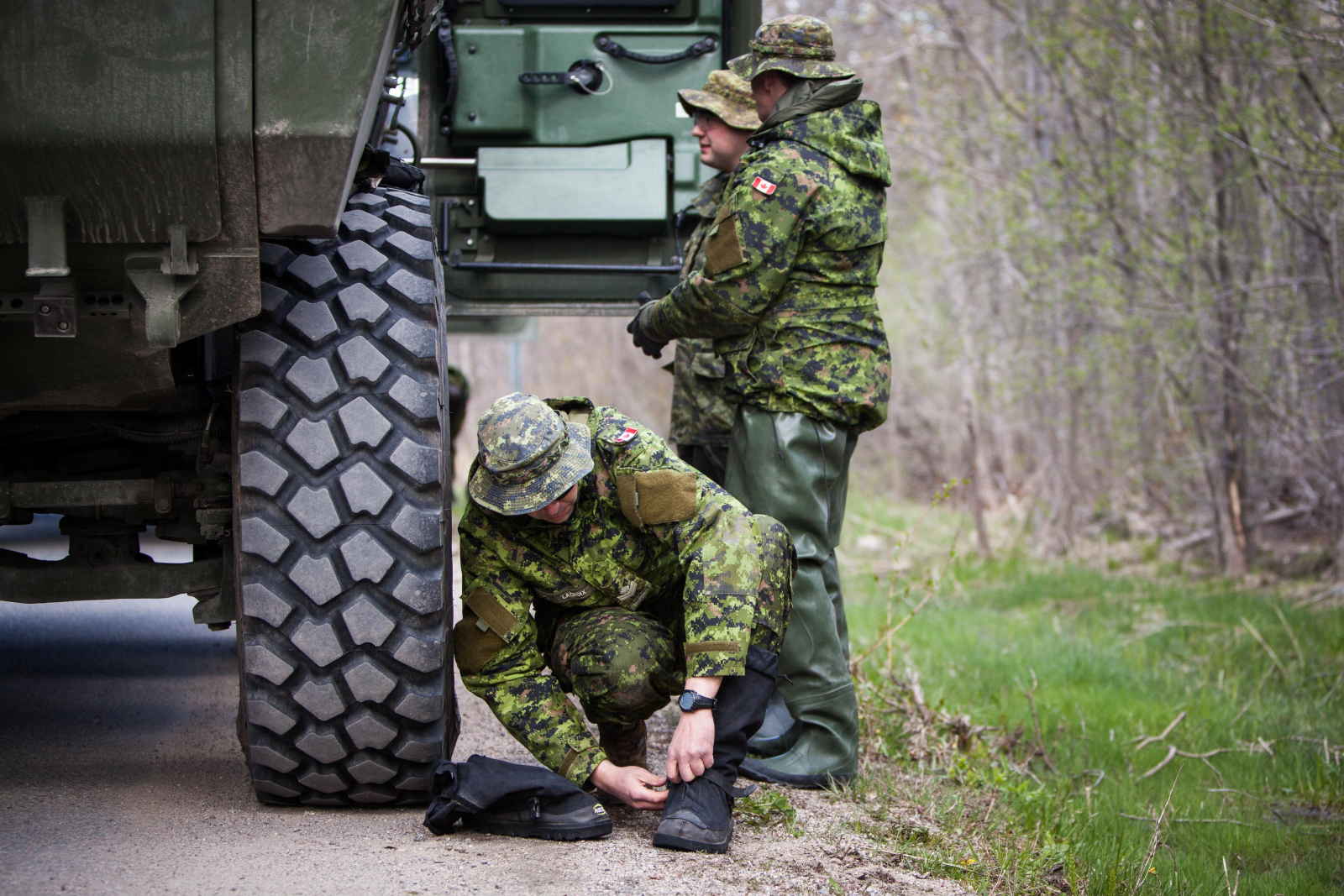 Waders and waterproof boots are necessary tools for this task. As the troopers disembark, they get ready to go door to door in flooded areas. Photo by Alex Tétreault

I then spent most of the day following Troop 42, soldiers who had travelled from the Valcartier base near Quebec City for Operation LENTUS.

Driving from location to location, Trooper Benjamin Dionne-Houle was keeping an eye out of his hatch. But instead of the natural surroundings or forested areas that he might have seen during training exercises or deployment, he was now scouting out residential streets and neighbourhoods a few kilometres away from Canada's Parliament.

His team was counting on him to keep a close eye on traffic and help navigate and maneuver the large green vehicle in the major urban environment, surrounded by civilians.

The troops donned waders and waterproof boots for the task. They were all suited up and ready to knock on doors to lend a hand. 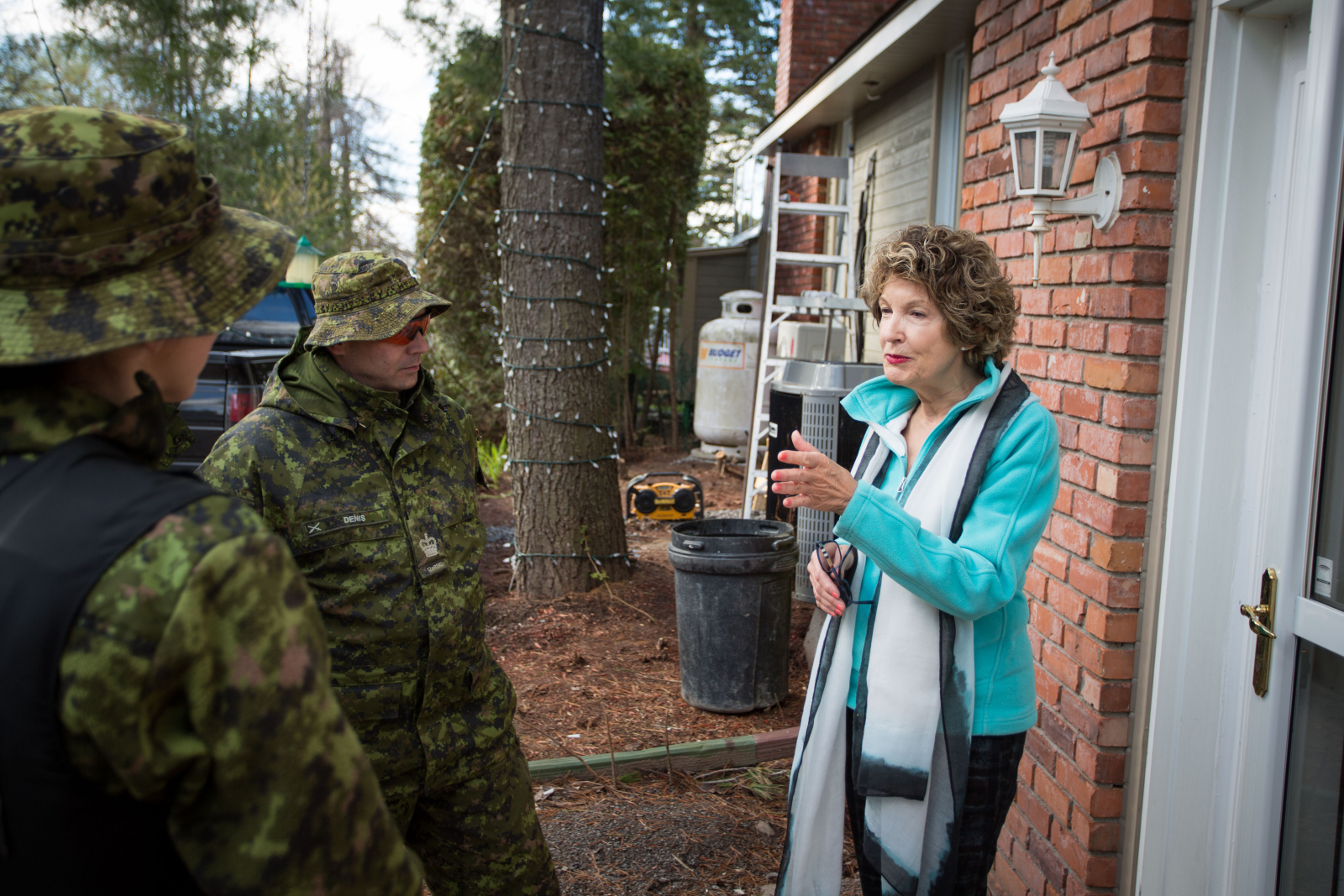 Gatineau resident Lise Bertrand chats on May 10 with Canadian troops who have been deployed to provide relief to victims of flooding. Photo by Alex Tétreault

The troops from the Canadian Armed Forces are experts when it comes to sandbags.

Over the previous days, volunteers from the region had loaded up thousands of the sandbags to help protect some of the most vulnerable buildings.

But as the troops arrived near a pile, a bunch of them sprung into action joining in this task, while others spread out in the neighbourhood and started knocking on doors to see who needed help.

Lise Bertrand lives close to the river and was one of the first residents to greet them at her door.

She already was getting help with a couple of construction workers assisting on her property, but she told the troops she was happy to see some reinforcements in the neighbourhood. 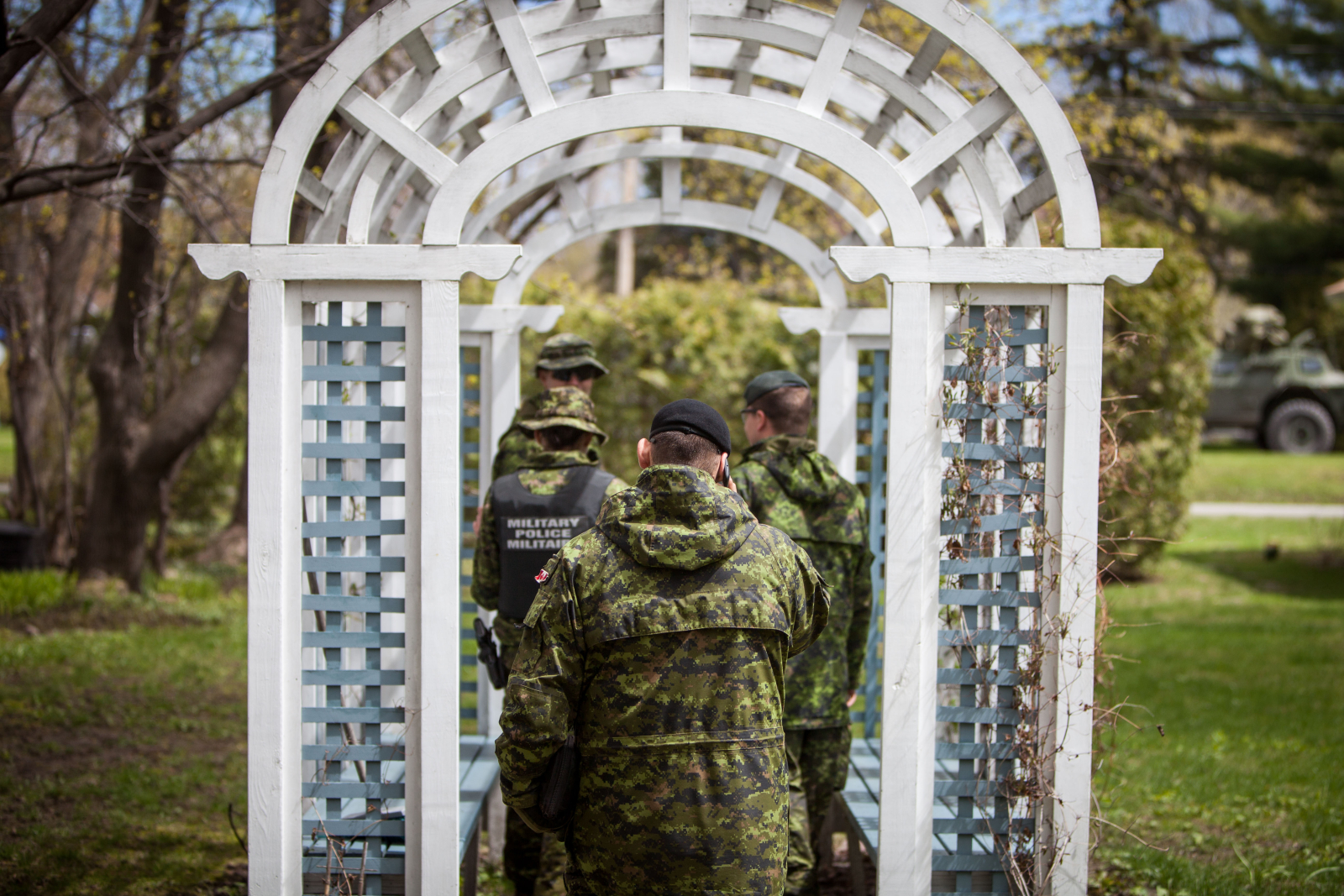 The troops pursue their rounds, occasionally finding some empty homes, as they continue to offer relief and support. Photo by Alex Tétreault

Not that far away, Jacqueline Fillion got some tips to stay healthy.

Master Corporal Dominick Lacroix and Corporal Martin Hébert chatted with her as she pointed toward some of the flooded areas near her neighbour's house.

Corporal Hébert is a medical technician with the Canadian Forces and he urged her to be careful.

He said the river water had been contaminated by flows of raw sewage and she needed to avoid consuming anything that has touched that water.

In many cases, the troops found empty homes that were already evacuated.

But they still stopped to do short walkthroughs to ensure that no one was left behind. 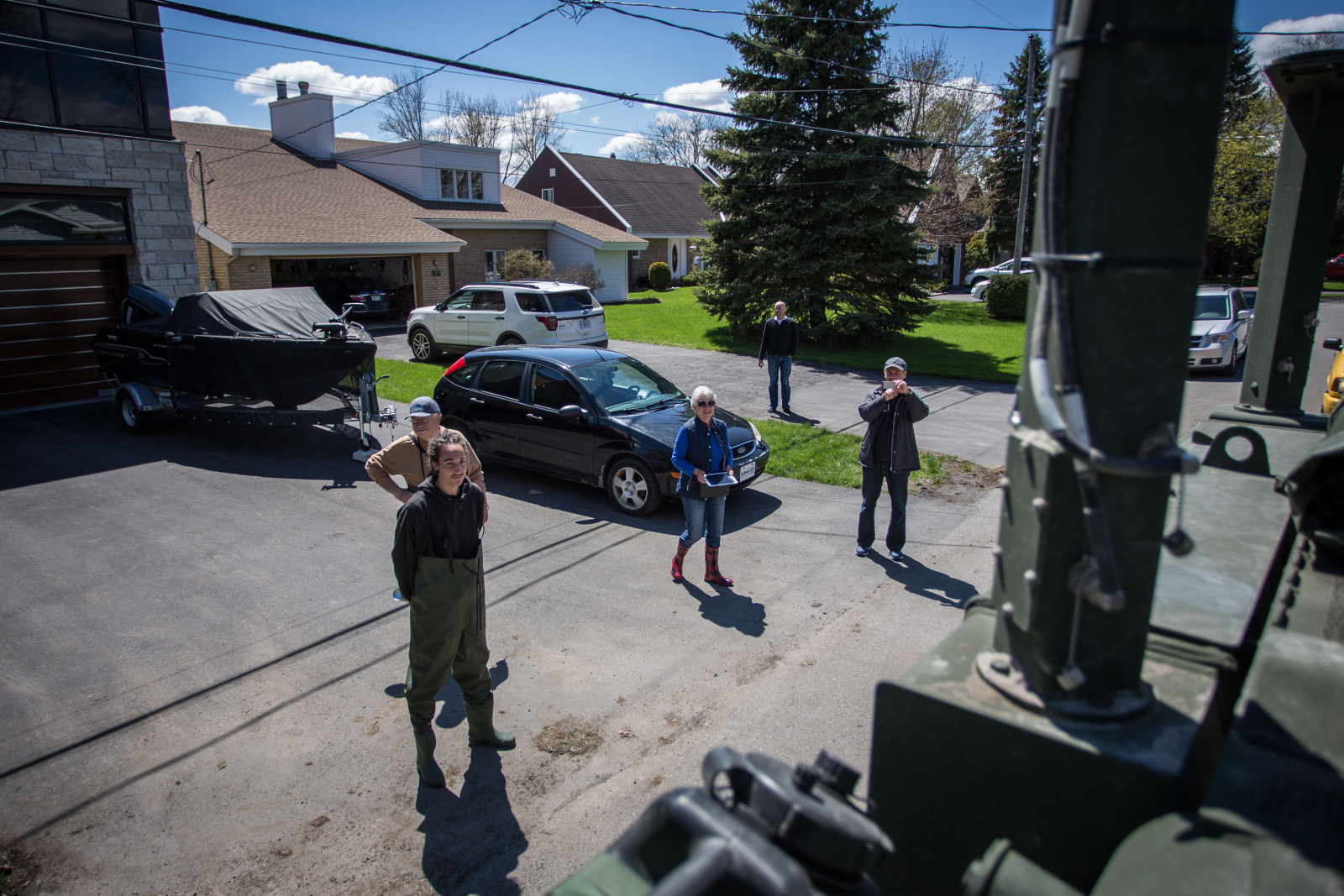 Some locals in Gatineau come outside as they hear the military vehicles approaching on May 10, 2017. Photo by Alex Tétreault

Some of the locals told the troops that they were managing to keep the water at bay.

One couple in Aylmer told Warrant Officer Frédérick Denis that they had limited damage to their property. But they were relieved to see the military was around for additional support.

The visit also prompted some curiosity, or anxiety in some cases.

Many of the locals came outside as they heard the roar of the military vehicles approaching.

A few were curious to see what might happen next, while others worried that more bad news was on the way as they spot the convoy arriving.

The troops did their best to reassure the locals that the worst was behind them. 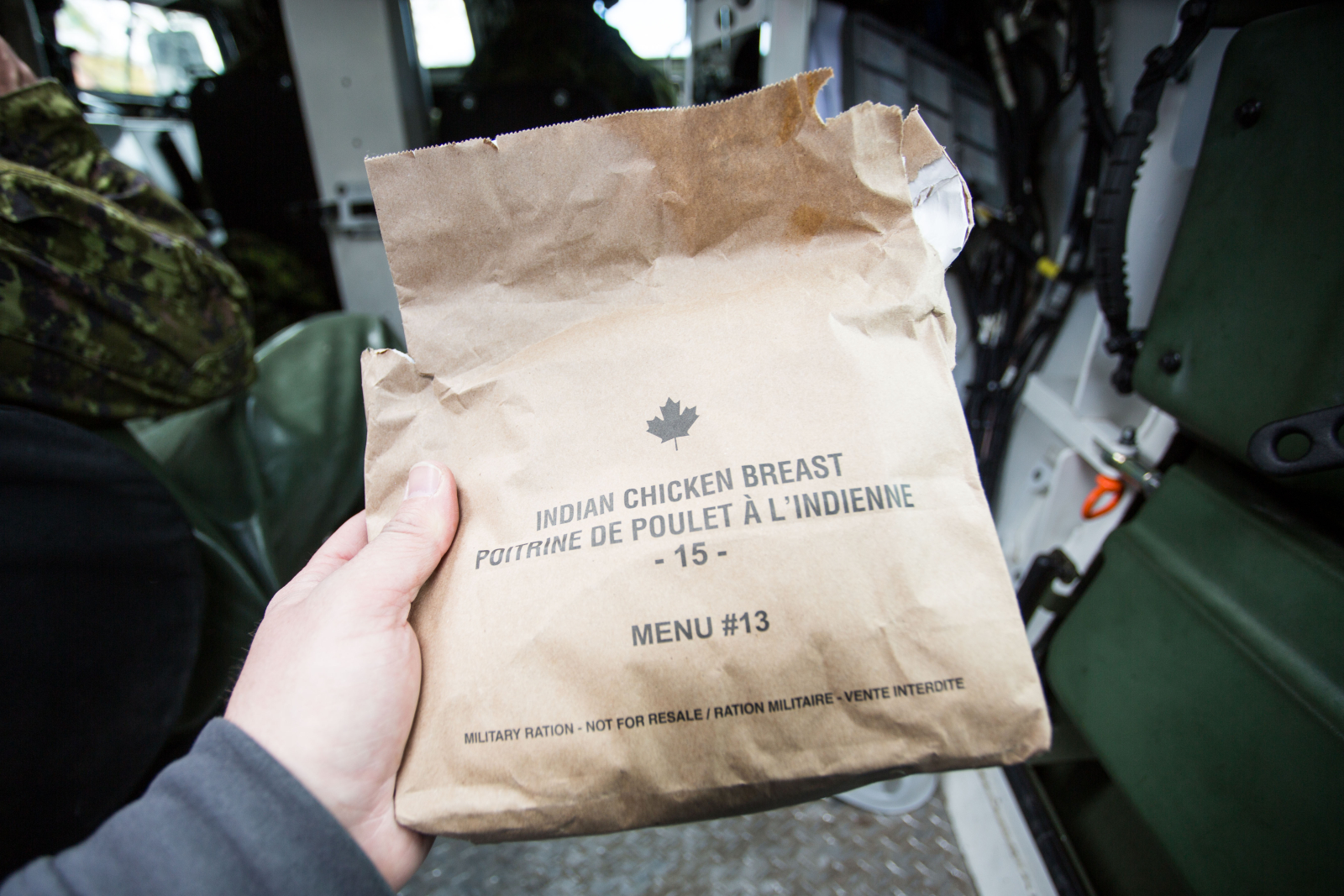 Canadian Forces fine cuisine! The troops are mostly fed IMPs (Individual Meal Packs, or rations) during Operation Lentus. They were happy to serve me one of their finest for lunch. Photo by Alex Tétreault

Little Zoe Lamoureux was among those who got an unexpected surprise on Wednesday.

She came out to play with her grandfather at the playground as the sun came out. But the big green truck on her path prompted a detour.

Corporal Guillaume Roussy-Lapointe and Trooper Adam Rousseau-Bédard offered her a chance to inspect the vehicle, and then send her off smiling with a juice box.

For lunch, the troops get their own version of Canadian Forces fine cuisine — IMPs, or Individual Meal Packs, also known as military rations. They were happy to serve me their tastiest, the Indian chicken breast ration!

Even if they were deployed in an urban Canadian neighbourhood, this is still a mission. The troops must remain on base in these circumstances and they aren't allowed to roam the city when off duty for the duration of the assignment.

Some of the homes they found were in bad shape. One of them was a brown cabin that was surrounded by water.

Corporal Jérôme Esculier and Trooper Raphaël Métivier waded through the swamp and approached the front door. But there was no answer when they knock.

The home appeared to be abandoned and at the mercy of the river. But it was also a symbol of the neighbourhood and the relief efforts as the troops tried to ensure that no one was left behind. 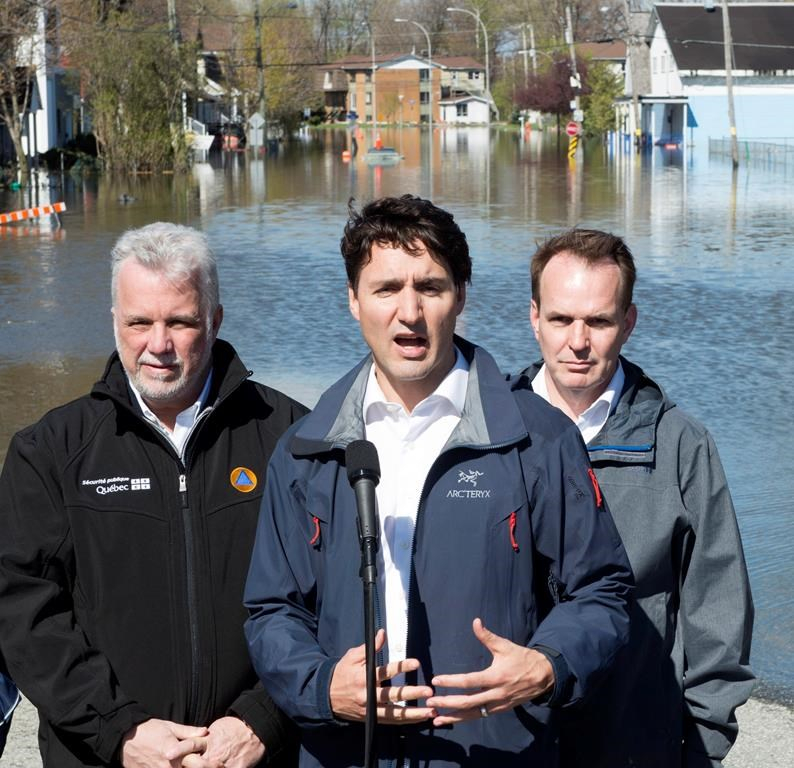 My day was over at this point, but Troop 42 still had work to do. They would get a break for a couple of hours before heading back out for an evening patrol.

I would like to extend my thanks to them for letting me tag along.

Government officials agree that these types of events are becoming more frequent because of climate change, resulting in costly payouts. But they say there's more we can do to build better and safer infrastructure, while mitigating some of the pollution that is causing changes to the climate.

One day after my visit, Prime Minister Justin Trudeau toured the area on a helicopter with Quebec Premier Philippe Couillard.

"We’re going to have to understand that bracing for a hundred−year storm is maybe going to happen every 10 years now or every few years," Trudeau said after his helicopter tour.

"That means as we look to rebuild our communities, our homes, our infrastructures, we’re going to have to think about what we can do to rebuild better, to rebuild in ways that are going to be more resistant, more resilient to the unpredictability we are now living."

National Observer photojournalist Alex Tétreault is a former soldier who served with the Canadian Armed Forces in Afghanistan. He also contributed to the military's combat camera program.