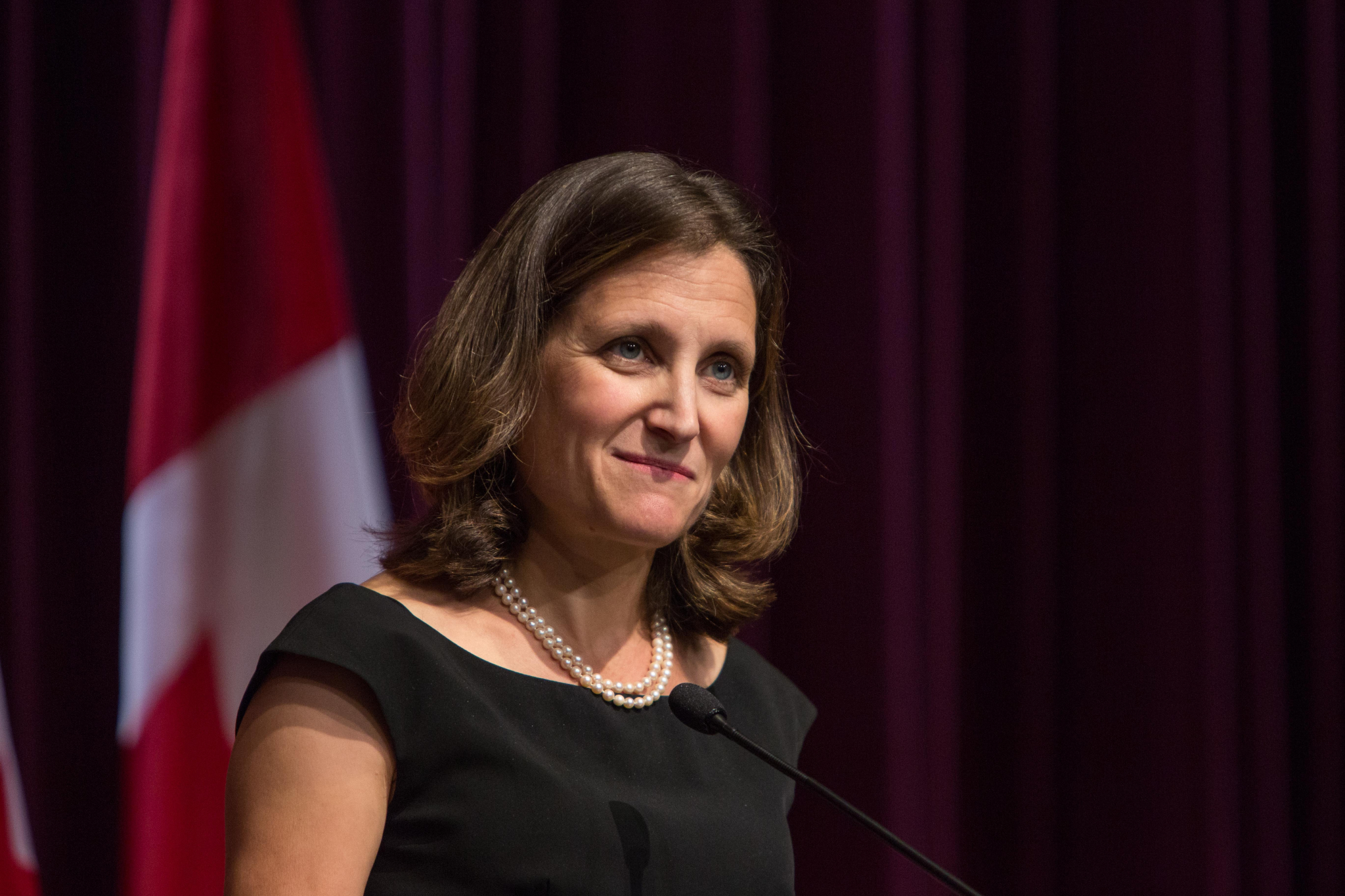 When it came time for the handshakes at the end of five days of intensive negotiations in Ottawa, Foreign Affairs Minister Chrystia Freeland wasn't taking any chances.

Canada, the United States and Mexico are far apart on a wide range of crucial issues in their ongoing efforts to update the North American Free Trade Agreement.

Freeland may have poked fun at those differences as she pointedly avoided a repeat of an awkward three-way handshake at a summit last year between Prime Minister Justin Trudeau and the former Mexican and U.S. leaders, Enrique Peña Nieto and Barack Obama.

"We're not going to do the three-way handshake,” she said grinning, and walked off the stage.

Freeland was speaking at Canada's foreign affairs headquarters in Ottawa, where she, Mexican Secretary of the Economy Ildefonso Guajardo and United States Trade Representative Robert Lighthizer announced the conclusion of the third round of NAFTA re-negotiations.

The negotiations were triggered earlier this year after U.S. President Donald Trump complained about NAFTA and threatened to terminate the agreement.

The three individuals gathered for a joint announcement that they have “effectively concluded” negotiations on one section of the new trade deal, covering small and medium-sized businesses.

Freeland also said she was "confident" negotiators would be able to declare the same level of progress on another chapter on competition, at some point before the fourth round of talks begins in Washington on Oct. 11.

"It has been a very highly productive round," said Guajardo.

But the officials also admitted that the process was difficult, with some fingers pointed at the White House.

"I think that we all know that the U.S. administration is one that is openly protectionist, and speaks openly of its America First policy,” said Freeland in comments to the press after the joint announcement.

“That's the reality in which Canada must operate, and that's what we're doing.”

During the press briefing, Freeland chose her words carefully, taking brief pauses before answering questions. She nevertheless dropped a few hints about the pressure. She said, for example, that her officials sometimes describe the U.S. administration to her as “unconventional,” which got a small chuckle from the room.

"We have known from the beginning that there were going to be a few issues...potentially different from those of Canada," said Freeland, but "without a formal position tabled, we can't respond to it.”

Canada’s stance is that it can’t engage on major contentious issues in NAFTA talks, like rules of origin or dispute settlement, because the White House has not yet tabled its position on those issues. Another controversial topic is Canada's system of supply management for dairy, poultry and eggs.

"I do not have the superpower that allows me to look into the hearts of my counterparts” and know what they’re thinking before saying it, argued Freeland.

Mexico and the U.S. also acknowledged the difficulty of the talks. "Differences are part of every negotiation process,” said Guajardo in his remarks during the joint statement. At the next round in Washington, he said, “we'll have substantial challenges to work on.”

Even Lighthizer, who counts President Trump as his boss, acknowledged the "difficult and contentious issues” in the talks.

Yet Freeland also insisted that "we have made astonishing progress for a trade agreement” in the amount of time negotiators have been given so far, just over a month.

Many trade deal talks end up dragging on for years. Canada’s trade negotiations with the European Union, for example, began in 2009 and only recently came into force.

Another issue creating headwinds is the decision this week by the U.S. Department of Commerce to slam Montreal-based aerospace king Bombardier with a 220 per cent preliminary countervailing duty on its CS100 airplanes.

Freeland brushed aside concerns that this kind of hardball was impacting the talks.

"I do want to remind Canadians that aggressive actions and aggressive decisions by Commerce are nothing new," she said, raising the example of the long-running softwood lumber dispute. “These commerce rulings are separate from NAFTA modernization.”

Freeland and Lighthizer began the joint statement by mentioning their sorrow concerning the devastating Sept. 19 earthquake in central Mexico that killed at least 333 people, injured thousands and displaced thousands more.

Canada is providing 1,500 tents and other assistance to Mexico in response to a request for temporary shelter, said Freeland, and Guajardo said he appreciated the "invaluable assistance."