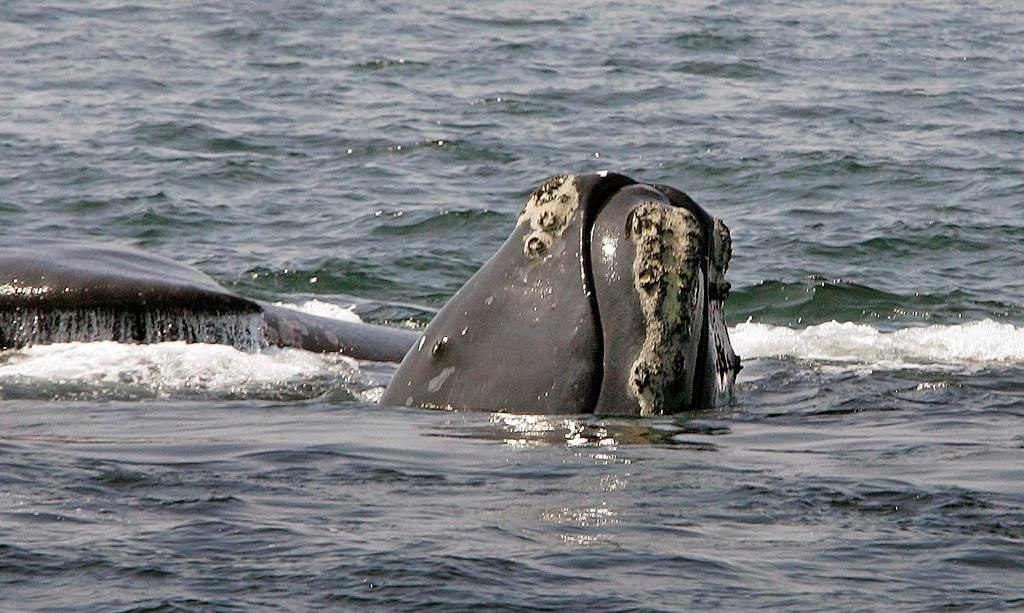 In this April 10, 2008, file photo, the head of a North Atlantic right whale peers up from the water as another whale passes behind in Cape Cod Bay near Provincetown, Mass. File photo by The Associated Press/Stephan Savoia
Previous story
Next story

Researchers with the U.S. government and the New England Aquarium have developed a new model they said will provide better estimates about the North Atlantic right whale population, and the news isn't good.

The model could be critically important to efforts to save the endangered species, which is in the midst of a year of high mortality, said Peter Corkeron, who leads the large whale team for the National Oceanic and Atmospheric Administration's Northeast Fisheries Science Center.

The agency said the analysis shows the probability the population has declined since 2010 is nearly 100 per cent.

"One problem was, are they really going down or are we not seeing them?" Corkeron said. "They really have gone down, and that's the bottom line."

NOAA said in a statement about the new model that it's using a new statistical method to get a "clearer and timelier picture" that's less affected by changes in whale distribution, less reliant on frequency of whale sightings and better at accounting for animals that are still alive but are seen infrequently.

Right whales appear off the coasts of New England and Atlantic Canada every spring and summer to feed. They are also showing a worrisome, widening population gap between males and females, NOAA said. Females declined from an estimated 200 in 2010 to 186 in 2015, the agency said.

The new model is being unveiled during a disastrous year for the whales, which were hunted to the brink of extinction during the commercial whaling era. There were 14 known deaths of North Atlantic right whales so far in 2017, and reproduction has been poor, scientists say.

By The Canadian Press | News, Politics | August 18th 2017
State Of The Animal