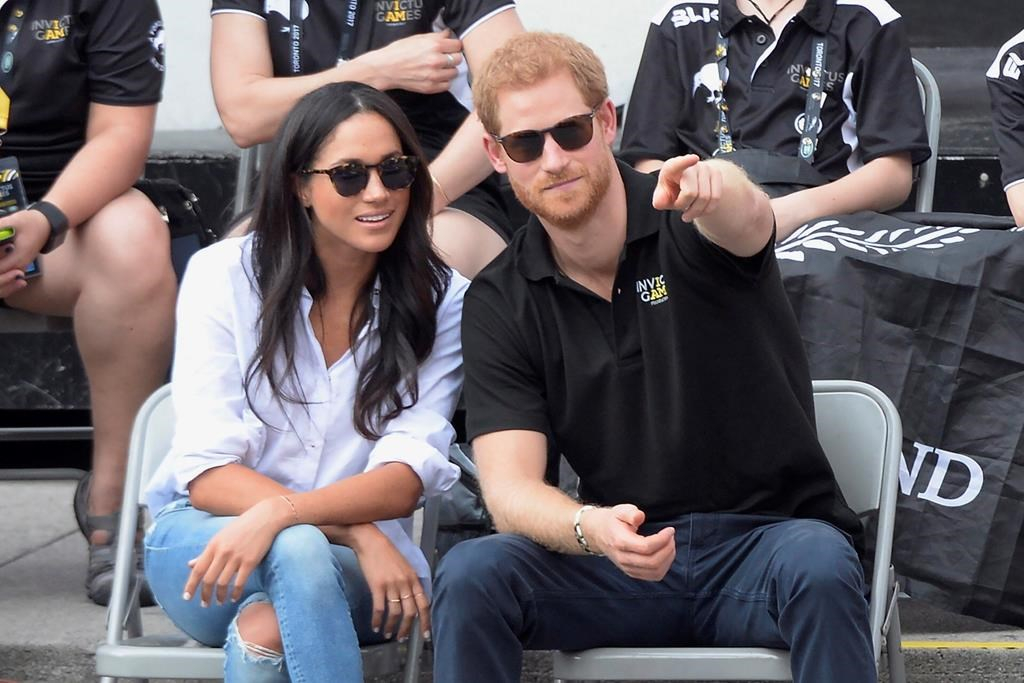 Prince Harry and his girlfriend Meghan Markle attend a wheelchair tennis event at the Invictus Games in Toronto, on Monday, Sept. 25, 2017. Photo by The Canadian Press/Nathan Denette
Previous story
Next story

Prince Harry and his girlfriend Meghan Markle chose to make their public debut as a couple in Toronto on Monday, making an unexpected but highly anticipated appearance together at the Invictus Games, the international sporting competition spearheaded by the royal.

The prince and Markle, a Toronto-based actor in the legal drama "Suits," held hands as they walked toward Toronto's city hall to take in a game of wheelchair tennis, one of several events that make up the week-long Games for wounded soldiers.

Both were dressed casually in jeans, the prince pairing his with a black polo shirt while his girlfriend wore a pale button-down shirt. They both wore dark sunglasses. And for those wondering, there was no ring seen on Markle's left hand.

Harry, 33, is in the city for the Games, a multi-day sporting event he founded in 2014 to inspire and motivate wounded soldiers on their paths to recovery.

His presence had sparked intense speculation about whether the couple — who have publicly acknowledged their relationship and have been photographed together in the past — would appear together at an official event.

Markle, 36, had appeared at the Games' opening ceremony this weekend, cheering athletes from the stands, but was seated several rows away from Harry, who sat next to Prime Minister Justin Trudeau and U.S. first lady Melania Trump.

That they chose a sporting event at the Games as their first public joint appearance is significant, said royal historian Carolyn Harris, author of "Raising Royalty: A Thousand Years of Royal Parenting."

"The Invictus Games has been his initiative and it grows out of his own military service and now one of the key aspects of his public service is promoting the interests of veterans, so it shows how important this event is to him that he's in Toronto attending all these events and that Meghan is accompanying him," she said.

"This public appearance also demonstrates how Canada is a very welcoming environment for royalty — William and Kate, the Duke and Duchess of Cambridge, made Canada their first Commonwealth tour as a married couple and now we're seeing Prince Harry and Meghan Markle stepping out as a couple."

Some royal watchers had earlier suggested the couple would hold off on a public appearance together for fear of stealing the spotlight away from the Games, but Harris said their presence has, in fact, brought more attention to the event.

She said it is interesting that they chose to attend wheelchair tennis together, noting that tennis courts have been "the setting for royal events since the Middle Ages."

Harry has been dating Markle since last year. He confirmed the relationship in November when he complained about intrusive press coverage. Markle recently told Vanity Fair she and Harry are in love.

Harry and Markle sat together in the stands at the small downtown Toronto tennis venue on Monday, occasionally applauding or leaning in to talk to each other. The couple later lingered to speak and shake hands with some in the crowd.

They eventually walked away from the event, again holding hands.

The Invictus Games run until Sept. 30.