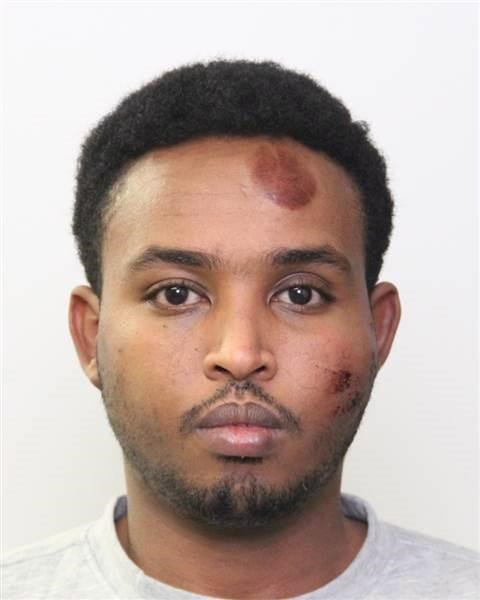 Abdulahi Hasan Sharif, 30, has been charged with five counts of attempted murder and other crimes after attacking an officer and running down pedestrians in Edmonton. Photo from Edmonton police service via The Canadian Press
Previous story

Police have criminally charged a Somali refugee who attacked an officer and ran down pedestrians with a truck — but are holding off on terrorism charges for now.

"The complexities of a terrorism investigation are vast," Talbot said Monday. "We continue to collect and gather information.

"As the investigation unfolds and further information is garnered and if additional charges are supported, they will be pursued at that time."

Sharif, 30, is set to make his first appearance Tuesday in provincial court on 11 charges, including five counts of attempted murder.

He has also been charged with dangerous driving, four counts of criminal flight causing bodily harm and possession of a weapon for a dangerous purpose.

Police raised the possibility of terrorism charges on Sunday when revealing that Sharif had been investigated two years earlier for espousing extremist views and was found to have an Islamic State flag in his car.

Edmonton police have said they believe the suspect acted alone and without conspirators during the series of attacks, which began around 8:15 on Saturday night.

At that time, Edmonton police Const. Mike Chernyk was handling crowd control at a Canadian Football League game outside Commonwealth Stadium, just northeast of downtown. He was hit by a speeding white Chevy Malibu that rammed through a barrier and sent him flying five metres through the air.

The driver got out, pulled out a large knife and began stabbing Chernyk, a 10-year veteran, as he was lying on the ground. Chernyk fought back and the suspect fled on foot.

Chernyk was cut on his face and had abrasions on his arms but is expected to make a full recovery.

Police knew the name of the Malibu's registered owner, as well as the suspect's physical description, and set up roadblocks. Officers stopped the suspect, now driving a U-Haul truck, hours later a checkpoint near the stadium.

With police in high-speed pursuit, the suspect took off toward the downtown, mowing down four pedestrians along the way. The chase continued until police forced the truck to crash on its side. They then used a stun gun on the driver and took him into custody.

Edmonton police Insp. Carlos Cardoso was asked by reporters why authorities did not broadcast the name and details of the suspect to the general public after Chernyk was attacked, given the incident had the earmarks of a terrorist attack and happened near a major sporting event.

"We go on the information we have at the time," said Cardoso. "At that time we had the area flooded. We had points set up and we knew very little about this individual.

"The events that transpired shortly thereafter happened that quickly so the opportunity to actually provide that duty to warn just wasn't there at that time.

"There will certainly be a review after this to see if we could do things differently, but I do believe what we have in place right now is working quite well."

Two of the four pedestrians remain in hospital, one with a fractured skull.

In Ottawa, Public Safety Minister Ralph Goodale said Sharif crossed legally into Canada in 2012 at a regular border crossing and obtained refugee status at that time. He said nothing raised any red flags at the time.

On Sunday, RCMP assistant commissioner Marlin Degrand said the suspect was checked thoroughly in 2015 after police received a report that he may have been radicalized.

Investigators determined at that time that he did not pose a threat.

Degrand said files on the suspect were kept and shared with other intelligence and police agencies.

— With files from Stephanie Levitz in Ottawa