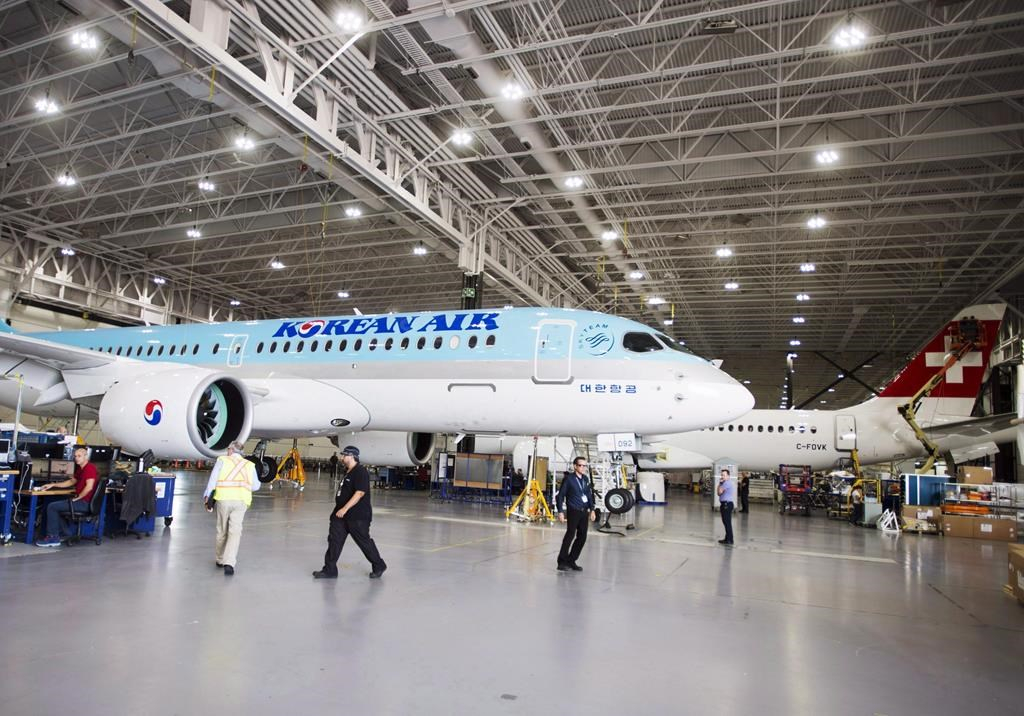 A Bombardier employees work on a CSeries 300 jets at the company's plant in Mirabel, Que., on September 28, 2017. File photo by The Canadian Press/Ryan Remiorz
Previous story
Next story

Bombardier Inc. accused the Trump administration of overreach by siding with Boeing in its bid to shut the CSeries commercial jet from the world's largest airline market by effectively quadrupling the price of any of the planes sold in the United States.

"It represents an egregious overreach and misapplication of the U.S. trade laws in an apparent attempt to block the CSeries aircraft from entering the U.S. market," the Montreal-based transportation manufacturer said in response to an additional 80 per cent anti-dumping duty.

Bombardier said the Commerce Department has ignored aerospace industry realities, noting that Boeing's own practice of selling aircraft below production costs for years after launch would fail the test used against the CSeries.

"This hypocrisy is appalling, and it should be deeply troubling to any importer of large, complex, and highly engineered products," it said.

The decision intensifies political pressure on NAFTA negotiators ahead of next week's resumption of talks among Canada, Mexico and the U.S.

The U.S. Commerce Department added 79.82 per cent to 219.63 per cent in preliminary countervailing tariffs it announced last week, once deliveries to Delta Air Lines begin next year.

"The United States is committed to free, fair and reciprocal trade with Canada, but this is not our idea of a properly functioning trading relationship," stated Commerce Secretary Wilbur Ross.

"We will continue to verify the accuracy of this decision, while (doing) everything in our power to stand up for American companies and their workers."

Foreign Affairs Minister Chrystia Freeland said she was extremely disappointed, but not surprised given the "baseless and absurdly high" duties last week.

"Boeing is manipulating the U.S. trade remedy system to prevent Bombardier's aircraft, the CSeries, from entering the U.S. market despite Boeing's admission that it does not compete with the C Series," she said in a statement.

"Our government will continue to vigorously defend the interests of the Canadian aerospace industry and our aerospace workers against irresponsible and protectionist trade measures."

Several U.S. senators and House members also expressed their unhappiness, calling the decision "shortsighted" because it threatens thousands of jobs across the country supported by Bombardier and its suppliers.

The latest duty matches the amount originally proposed by Boeing, before it revised its request to 143 per cent because of Bombardier's refusal to provide certain information to the Commerce Department.

The Chicago-based aircraft giant said it welcomes the decision affirming its view that Bombardier sold the CSeries to Delta at prices below production cost to illegally grab market share in the single-aisle airplane market.

"This determination confirms that, as Boeing alleged in its petition, Bombardier dumped its aircraft into the U.S. market at absurdly low prices," it said in a news release.

Countervailing duties target what the U.S. considers unfair subsidies, while anti-dumping tariffs go after the alleged selling of imported products below market value.

U.S. aerospace analyst Richard Aboulafia said the high duties will hurt CSeries sales efforts to leasing companies and shut the plane out of the U.S. unless the U.S. International Trade Commission effectively ends the challenge in February.

"If the ITC doesn't find that this damaged Boeing then this whole thing vanishes like a bad dream," he said in an interview.

Aboulafia says the process appears to have been politicized, which requires authorities to detail their reasonings to avoid further damage to the international jetline sector.

A Bombardier union said it wasn't surprised by the new duty given the 48 per cent increase in the number of dumping allegations since the Trump administration took office.

"These tribunals are like the right arm of the large corporations of Boeing," said Dave Chartrand, Quebec co-ordinator of the International Association of Machinists and Aerospace Workers.

He said workers will fight even harder to get the duty reversed.

"We will stand up and we will fight."

Boeing petitioned the government in April after its smaller rival secured a deal for up to 125 of its CS100s with Delta in 2016. The firm order for 75 aircraft had a list price of US$5.6 billion, although large orders typically secure steep discounts.

Bombardier has repeatedly stressed that Americans will be hurt by the tariffs because more than half the content on the 100- to 150-seat CSeries is sourced by U.S. suppliers, including Pratt & Whitney engines. The program is expected to generate more than US$30 billion in business over its life and support more than 22,700 American jobs in 19 states.

Boeing's complaint has prompted a heavy political reaction from the Canadian government and British Prime Minister Theresa May, who fears job losses at Bombardier's wing assembly facility in Northern Ireland.

Canada has threatened to cancel the planned purchase of 18 Super Hornets to temporarily augment Canada's aging fleet of CF-18s.

Boeing refusing to blink in dispute with Bombardier despite Liberal threats