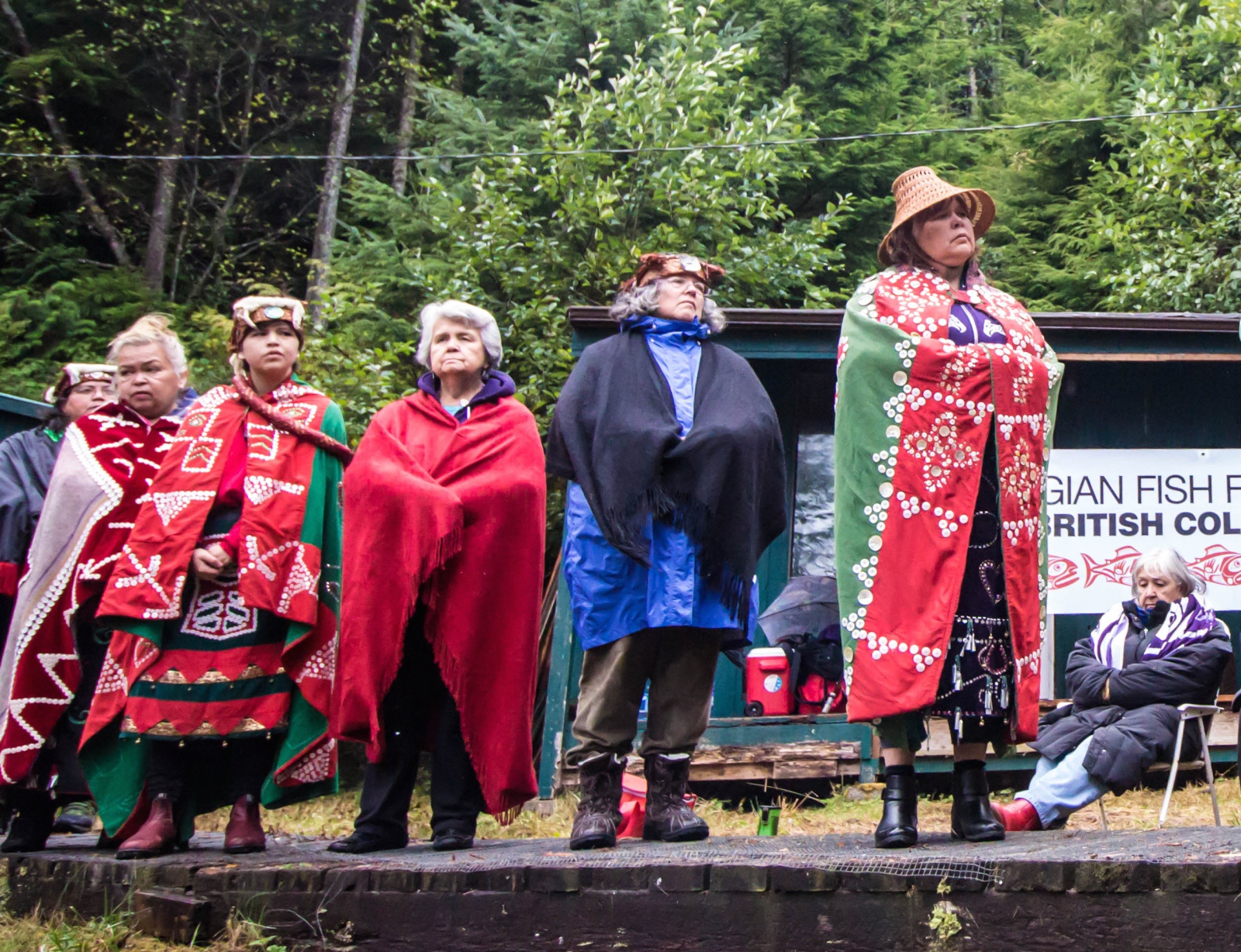 Just days after British Columbia politicians attended an official meeting with concerned First Nations community and Chiefs, three people have been summoned to court for their occupation of three open-net fish farms located on First Nations territories in the Broughton Archipelago.

Late on Monday evening, community members occupying Marine Harvest operations in the coastal Broughton Archipelago were served notices of injunction filed by Marine Harvest, in response to the peaceful occupation on three sites. As of Tuesday, the occupiers remained at their posts on Swanson Island, Midsummer Island and Port Elizabeth fish farm facilities, but are expected to appear in court on Wednesday.

The notices of injunction come days after B.C. Premier John Horgan met with a newly unified alliance of eight First Nations, whose ultimate goal is to remove the open-net fish farms that they say severely threaten wild salmon populations and all associated ecosystems along the coast.

Norwegian-owned fish farm Marine Harvest declined to comment on this particular story and advised National Observer to check the company's website for updates on “trespass and protest” of its fish farms. The company, which employs hundreds of staff, maintains that its fish farms operate responsibly and do not pose a threat to wild salmon.

'Pretty odd' for a Monday on the island

The ceremony was attended by elected chiefs, matriarchs, elders and community supporters. They were welcomed by Hereditary Chief Ernest Alfred of the 'Namgis, Lawit'sis and Mamalilikala Nations, and allies who pounded drums, sang and danced.

Since the gathering, the nearby community of Alert Bay, B.C., which is further east, has reported an increasing number of B.C. RCMP officers in Port McNeill. Members of the fish farm occupation are increasingly suspicious of the escalating police activity.

"If you were to call the Black Bear Resort — they are fully booked tonight," Carla Dawson, the mother of one of the occupiers, Molina Dawson, told National Observer. "Pretty odd for a Monday October night in the north island."

The community is outraged as fish farms continue to be re-stocked, which means the salmon will be ready for harvest in 10 months — after the farms' provincial tenure expires in June. On Oct. 13, the Norwegian-registered Viktoria Viking fish carrier entered Musgamagw Dzawada'enuxw territory and poured new Atlantic salmon into the company farm in Knight Inlet.

First Nations occupiers say the restocking action is an affront to wild salmon protectors who have called on the B.C. government to withhold from activity until the dispute is properly managed.

The B.C. RCMP released a press statement on Saturday in response to accusations on social media that they were supporting Marine Harvest employees in re-stocking the fish farms. The police officers said they are "impartial" in the dispute.

"We understand and respect the rights of individuals to peacefully demonstrate and we are committed to protecting those rights. At the same time, companies also have a lawful right to complete their mandated work," wrote media relations officer Janelle Shoihet.

"Our role is to maintain peace and ensure the safety of all those involved, and in order to do so we need to physically be in a position to respond should there be a need for our services — from demonstrators, spectators, fish farm workers and general public."

The movement is growing

Since the occupations began in August, dozens of supporters have traveled far and wide, from Haida Gwaii, interior B.C. and surrounding islands, to support those on the front lines of farmed salmon dispute in the Broughton Archipelago.

The fight to protect wild salmon, a cornerstone species to the entire northwest Pacific Coast, from catastrophic decline, is a complicated intergenerational conflict. The Musgamagw Dzawada'enuxw in particular have been fighting fish farms in their territories since they were first set up 31 years ago. Members of the community claim that the fish farms — some of which have tested positive for farming-related diseases — infect wild fish populations, and that the bins, known as mort totes, that carry dead and diseased product are poisoning the water.

National Observer investigated the dispute when First Nations' community members first decided to occupy the farms at the end of the summer. According to the BC Salmon Farmers Association, there are 109 salmon farms spread throughout the B.C. coastline. Those leading opposition in B.C., including the First Nations Wild Salmon Alliance, advocate for alternatives to open-net fish farms, such as land-based closed-containment farms that pose no threat to the ocean.

At least eight First Nations are unified against open-net fish farms, and the occupiers say they will not back down until all open-net fish farms are shut down in the Broughton Archipelago. Meantime, supporters of the movement continue to occupy Horgan's constituency office in Vancouver.

On Saturday, October 14, Chiefs from surrounding nations, environmental activists and allies made the trip to Port McNeill, where they boarded a ship that took the group through biting rain and choppy water, to the site. The group celebrated the arrival, participants took turns speaking and freshly baked homemade bread and wild salmon sandwiches were passed around.

Organizers of the Swanson Island gathering said they planned Saturday's event in response to a lack of immediate action from B.C. politicians.

On October 10, eight First Nations representatives were joined by Horgan, B.C. Minister of Agriculture Lana Popham, Minister of Indigenous Relations and Reconciliation Scott Fraser, and Minister of Transportation and MLA for the North Island, Claire Trevena.

In addition to the end of open-net fish farms, advocates asked that no further restocking of the existing empty pens or sites take place; no further use of hydrogen peroxide to treat sea lice infestations and no renewal of licences and/or tenures.

The ‘Namgis community also presented Kuterra, a closed-containment aquaculture facility, as an alternative to the open-net fish farms. The group identified strategies for a growing ecotourism industry that they claimed could provide sustainable employment opportunities, on top of the potential jobs for more closed-containment facilities.

Horgan subsequently released a statement to the public, sympathizing with First Nations’ concerns, but announcing no clear action. When asked for comment about the growing resistance to fish farms in the Broughton Archipelago, Horgan's office referred National Observer to the office's official statement.

“Any strategy for aquaculture must put a priority on the protection of wild salmon, collaborate with First Nations and acknowledge their interests, involve the federal government and recognize that the industry now generates nearly $800 million in annual value, while supporting several thousands jobs in rural and coastal areas,” the Office of the Premier wrote.

When asked about her visit to Alert Bay, Agriculture Minister Lana Popham said she was "there to listen." In an email, she said the B.C. government appreciates the invitation to meet with hereditary chiefs and elders on salmon aquaculture.

"I hear and understand the concerns being raised by First Nations and members of the public and I have been proactive in meeting with my federal counterparts regarding the importance and urgency of this issue. At the same time, it is important to recognize that the industry now generates nearly $800 million in annual value, while supporting numerous jobs in rural and coastal areas.

In an interview, vice-president Bob Chamberlin of the Union of BC Indian Chiefs and chief councillor of Kwikwasut’inuxw Haxwa’mis First Nation, said the responses from Horgan and Popham are safe tactics.

“They have one leg on either side of the fence,” he told National Observer.

In response to mounting tension between occupiers and fish farmers, the federal Department of Fisheries and Oceans warned that no individuals should "trespass on private property," regardless of their right to peaceful and lawful protest. The ministry encouraged all to respect "biosecurity protocols" at fish farming facilities.

"Biosecurity protocols include proper cleaning of vessels and equipment between visits to different aquaculture sites," said an emailed statement. "Failure to follow these protocols can result in the transfer of disease and parasites onto a site. The safety of individuals, including aquaculture facility employees, is paramount. In addition, farmed fish in the net pens should not be disturbed."

I truly believe that AGAIN,

I truly believe that AGAIN, campaigns to educate consumers on the ecological problems associated with open net fish farms are needed. Sleepers awake and demand that farmed salmon be labelled at site of sale as such and that sheet, pamphlet or poster info. is needed at each retailer site of farmed salmon. Educate your consumers and then let them decide which fish: "wild" or farm sourced will then be there healthy diet and ecologically sound nutritional choice.
Consumers need a source of this info so that they can take same to there retail store management and demand that such be added to a retail display site or if not, suggest that a picketing of the store with an information blitz could be an alternative. I'd do that; where can I get such info.?

Dinner time? Leave the fish off your plate