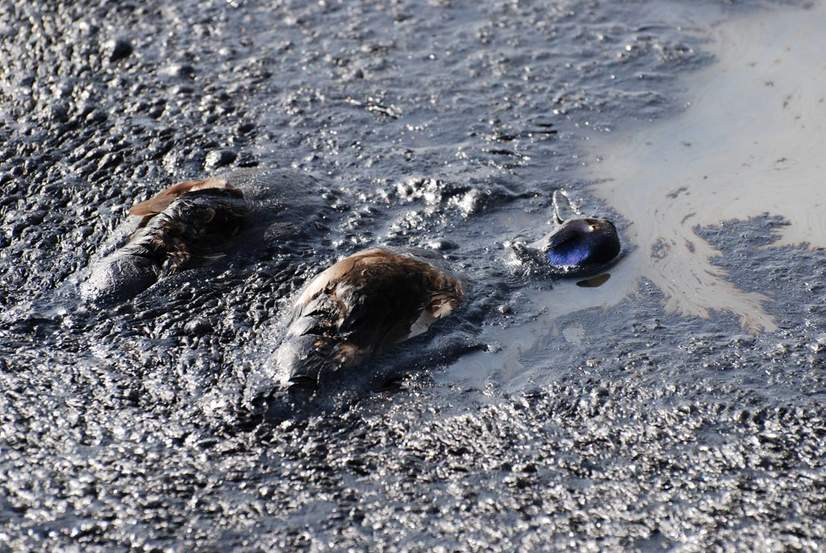 Editor's Note: This article originally appeared on DeSmog Canada and was re-published by National Observer with permission.

The lethal mix of migratory birds and oilsands tailings ponds are in the news again this fall.

On Sept. 20 we learned another 123 birds died or would be euthanized after landing on a Suncor tailings pond. And in December, Syncrude Canada will appear in court for failing to prevent the deaths of blue herons at an Alberta oilsands site, the very same crime the company was convicted of in 2010 after an estimated 1,600 ducks met the same fate on one of its tailings pond.

Convictions like Syncrude’s are supposed to help to prevent the deaths of waterfowl on oilsands sites. So why are we here again?

The outcome of the 2010 trial, in which Syncrude was found guilty of both federal and provincial crimes, resulted in a $3 million penalty, the lion’s share of which — $2.45 million — was handed out to a small group of beneficiaries in the largest “creative sentence” in Alberta’s history.

For certain crimes, judges can order creative sentencing penalties over and beyond fines; they can include reclamation activities, scholarships or research projects, for example. Creative sentencing projects are meant to compensate for harm caused by the crime and prevent similar incidents from occurring in the future.

A deeper look at what happened to the $2.45 million provides a glimpse into the intriguing world of creative sentencing and how companies like Syncrude, along with a tightknit network of organizations, can quietly benefit from environmental crimes while avoiding public scrutiny.

My research team at Mount Royal University, including co-investigator Gillian Steward and research assistants James Wilt and Cassie Riabko, found creative sentencing beneficiaries are usually hand-selected by both prosecution and defence and presented to the judge for consideration. There is no opportunity to apply for creative sentencing funds and no rationale is provided to the public as to why certain candidates are chosen over others — though our research shows connections to offending companies sure can help.

We studied 83 creative sentences for environmental crimes in Alberta and found a closed system where sentencing goals were not made public and much information is not in the public domain. This includes final financial reports and even some of the final creative sentencing projects themselves.

Creative sentences certainly take more work for the Crown to put together. In Alberta, they have been praised for providing quick funding to charitable organizations — the University of Alberta is the leading beneficiary — and for attempting to compensate for environmental harms through education, research and conservation projects. But creative sentencing fines have also been directed to wealthy industry groups including the Canadian Association of Petroleum Producers and even to a government department.

Our analysis shows there is a troubling lack of transparency around the public recognition of funds that may obscure the fact that companies are funding these projects as the result of a criminal conviction, rather than an act of generosity.

For example, many sentences portray convicted companies as “sponsors” or “donors.”

In 1999, Hub Oil was found guilty after an explosion killed two workers and was ordered to pay for two named scholarships at the Southern Alberta Institute of Technology.

Although the creative sentence was explicitly part of Hub Oil’s conviction, the company is listed as a “sponsor” of the scholarships on the institute's website — meaning a possible reputational boost for what is seen publicly as philanthropy.

The same holds for the listing of The Devon Canada Corporation Bursary at Olds College; this came from a $60,000 creative sentence ordered after Devon was convicted under Alberta’s Water Act.

The beneficiaries of Syncrude’s $2.45 million

Three beneficiaries were awarded funds in Syncrude’s creative sentence: the University of Alberta ($1.3 million), Keyano College ($250,000) and the Alberta Conservation Association ($900,000). Each of these organizations had previously received creative sentence funding and Syncrude was a donor or had done contract work for each. (In the case of the University of Alberta, the donations were to other parts of the university.)

Groups at the forefront of environmental change were not chosen. For instance, Ecojustice, the environmental law group that first brought the charges against Syncrude in 2010, did not receive creative sentencing funds.

The bulk of Syncrude’s creative sentence went to research into improving bird monitoring and deterrent systems in the oilsands. The award was perhaps puzzling given prosecutor Susan McRory spoke at length during Syncrude’s sentencing hearing about the company’s failure to use existing research into bird deterrence. (It hadn’t deployed any bird deterrents by April 28 when ducks died on a frothy tar-like mat, despite knowing birds migrate in that month.)

McRory said Syncrude even failed to use its own research from the 1980s that predicted “an event similar to what happened in this case.”

Despite this, University of Alberta professor Colleen Cassady St. Clair had impressed the judge as an expert witness for the prosecution. She was awarded a $1.3 million creative sentence to research and provide advice to industry on how to improve bird monitoring and deterrent systems for birds in the oilsands. She was also ordered to work with an industry advisory committee and to make all research public.

Cassady St. Clair hired dozens of researchers who in turn produced research used to make 43 scientific recommendations to industry. Syncrude was court-ordered to respond to St. Clair’s report but was also told it could choose to implement recommendations if they were “reasonable, reliable and cost effective.”

In a written response, Syncrude mentioned 21 of the 43 recommendations, avoiding any mention of specific cautions against the use of lasers for bird deterrence and the use of berms to attempt to separate more toxic from less toxic tailings.

Cassady St. Clair said she told Alberta Justice that Syncrude’s response was vague and seemed to be part of a risk management process. The ministry did not appeal the company’s response although the court gave it the right to. The bird monitoring program was privatized and largely out of public view.

In an interview, Cassady St. Clair said she remains hopeful the recommendations will positively impact bird monitoring and management.

“I think it could have a ripple effect over time,” she said.

Of fresh charges against Syncrude for bird deaths on a sump pond, she told CBC there were other bodies of water that needed to be monitored on these sites.

The Alberta Conservation Association (ACA) was given $900,000 to purchase land west of Edmonton known as Golden Ranches with the goal of preserving waterfowl habitat.

The award came through a contact: ACA's corporate lawyer worked for the firm that Syncrude was using. She set up for the ACA to provide a proposal as to what it would do to compensate for the loss of waterfowl. Compensating for harm is one of the goals of creative sentencing. (Another Syncrude case lawyer declared his conflict of interest to the court as a board member of a partnering organization for that land purchase.) At the time, the ACA didn’t know if the property owner would sell, indicating the speed at which the proposal had to go before the judge.

Syncrude is listed as a donor on a sign near the purchased property and, in a separate project, is listed as a sponsor of the Alberta Conservation Association “Discover Guide.”

Keyano College, located in Fort McMurray, received $250,000 to develop a new wildlife management diploma program. In its creative sentencing proposal to the court, Keyano said the program would include Indigenous and part-time students.

In its final report to Alberta Justice, Keyano did not mention Indigenous students. It did note that the college requested a change to the creative sentence to allow it to embed new wildlife courses into its existing environmental management program rather than developing a new diploma program. But we were unable to find a new creative sentencing order in the public domain. The college said 33 students had graduated from the newly enriched program as of 2016.

Keyano also recorded an unspent $29,143 from the creative sentence would be put toward a research project conducted in partnership with Syncrude. No court response to this proposed partnership exists in the public record.

Where to go from here?

Looking back, Syncrude’s creative sentence can be said to be investing in research and education — but given the new Syncrude charges, it didn’t seem to address weaknesses in the system: identifying reasons for and preventing bird deaths on oilsands water sites. Perhaps, the notion of preventing migratory birds from landing on tailings ponds some 640 football fields in size is just not doable. But companies are obliged to try.

Looking back, we found the overall creative sentencing system is one that operates in haste. Beneficiaries who are privately approached by the Crown scramble to put relevant proposals together between conviction and sentencing dates but when changes are made after the fact, that’s kept out of the public domain. Many mentioned a fund with wide latitude that organizations could apply to would be a good idea. Alberta Environment is considering that idea, too.

Perhaps more troubling, is the system of close ties that binds friendly beneficiaries to offending companies. Ultimately, with no specific direction from the court otherwise, companies and beneficiaries can credit creative sentence projects like philanthropy, rather than a court-ordered punishment.

If the court considers a creative sentence in the blue heron case perhaps it should strongly consider ordering research into eliminating tailings ponds altogether.

Editor's Note: This article was updated on Wed. Dec. 6, 2017 at 2:30 p.m. Eastern Time. Owing to author error, a previous version incorrectly stated that a lawyer on the Alberta Conservation Board helped pave the way for a creative sentence proposal. It was the ACA corporate lawyer who helped pave the way for a creative sentencing proposal in the Syncrude 2010 case, and not an ACA board member. The ACA board was not involved in the sentence. National Observer regrets the error.

Dandelions found in oilsands tailings could help clean them up: researchers

Creative sentencing = Creative cover-up, thanks to the Canadian "justice" system, another facet of Canadians' lives controlled by industry.