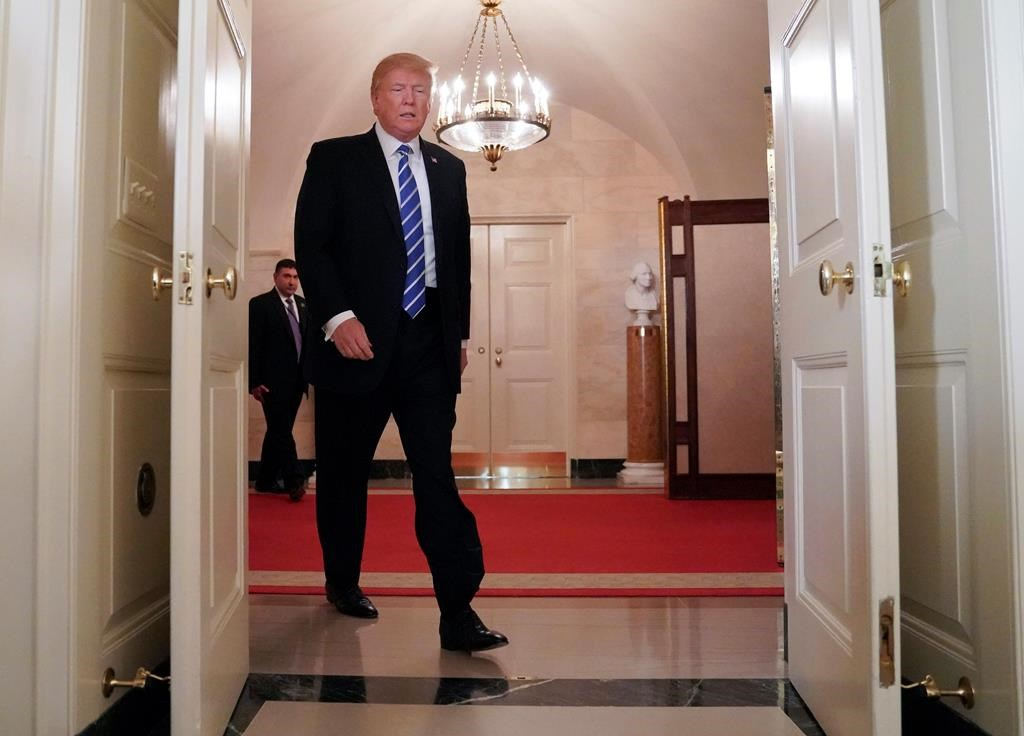 President Donald Trump arrives at the Diplomatic Reception Room of the White House, on Wednesday, Nov. 15, 2017 in Washington, to speak about his trip to Asia. Photo by The Associated Press/Pablo Martinez Monsivais
Previous story
Next story

American lawmakers have escalated their campaign against the Trump administration's handling of the NAFTA negotiations, slamming White House policies in a series of letters this week.

Separate letters have criticized the administration's push for a so-called sunset clause in the agreement; its proposal on auto-parts rules of origin; and its idea of using international agreements as the vehicle for lowering the U.S. trade deficit.

The signatories to one such letter are a trio of Republican senators, while another letter is signed by six dozen members of the House of Representatives from both parties.

That comes on top of a move from one senator, the soon-to-be-retiring Trump critic Jeff Flake, who has deployed a procedural tactic to delay the appointment of an agriculture-trade nominee.

The flurry of actions suggest American lawmakers might enter the fight if President Donald Trump tries to cancel NAFTA, a boon to supporters of the agreement hoping for signs the U.S. Congress might exercise some procedural or political pressure.

''We have watched with growing concern the negotiations,'' begins the letter from 72 members of the House of Representatives, most of whom are from Trump's party.

The letter said several U.S. proposals would damage the North American auto industry. The Trump team is pushing for a drastic overhaul of supply chains to favour domestic content, especially U.S. content, and has requested a near-instantaneous phase-in period of one year to achieve that change.

Car companies have said the demands are so outside the realm of what's applicable that they could be better off by simply ignoring NAFTA rules and paying import tariffs, which in the U.S. start at 2.5 per cent for small cars.

Other proposals are criticized in the letter from the three senators. One is the so-called sunset clause, an American proposal to let NAFTA expire in five years unless all three countries agree to keep it.

That letter from senators James Lankford, Mike Enzi and John Thune also brushes off the primary excuse cited by the Trump team as justification for overhauling existing deals: trade deficits.

Their letter calls his thinking faulty economics. In fact, the letter says there's an at-best-negligible connection between trade deficits and a virbrant economy, as the best recent year for trade deficits was the worst year for unemployment, during the Great Recession: ''At most, (these issues) appear at times to be inversely related."

Instead of cracking down on international commerce, the senators urged the administration to adopt policies that would help workers retool and relocate to new opportunities.

Some Washington insiders have expressed skepticism that lawmakers will actually stand up to the Trump administration if it tries cancelling NAFTA. The Republican leadership has remained mostly on the sidelines of this debate, prioritizing tax cuts where its views align with Donald Trump's.

But Trump's commerce secretary has criticized lawmakers for over-involvement. Of the congressional complainers, Wilbur Ross said this week that all the squawking in Washington doesn't help the U.S. side: "Frankly, it makes the negotiations harder," he said.

American lawyers gather to ponder Trump's NAFTA options: Can he cancel it alone?

Washington's No. 1 economic priority is tax cuts, not NAFTA