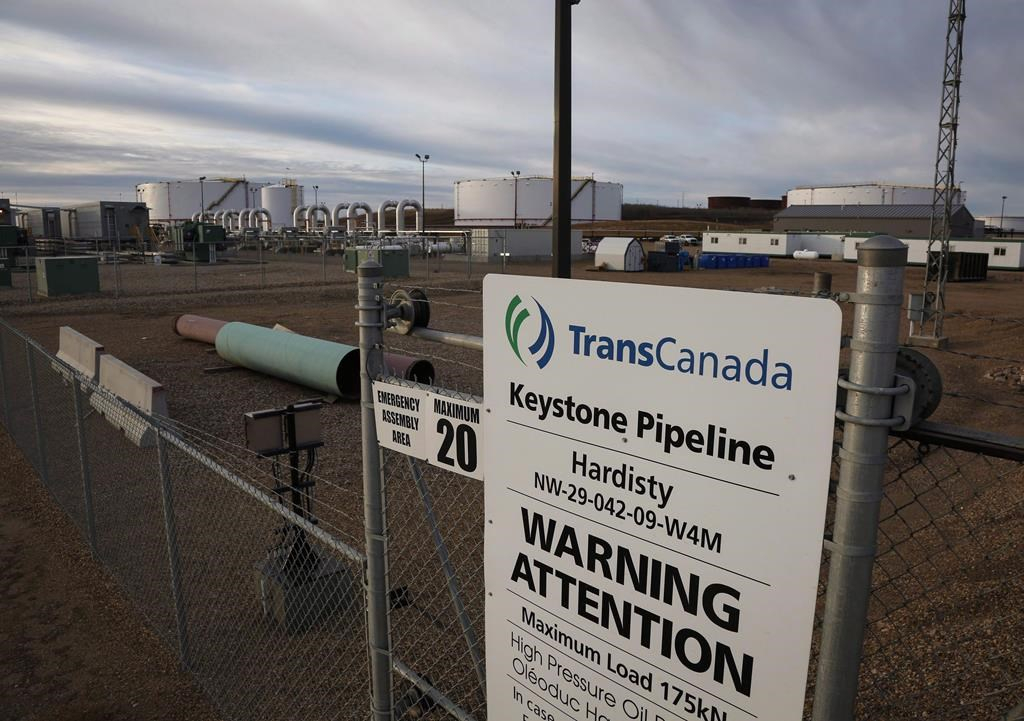 TransCanada Corp. said Friday that work is well underway to clean up a sizable oil leak at its Keystone pipeline in South Dakota that occurred days before a vote on the fate of the company's flagship pipeline proposal.

The company said about 75 crew members, as well as government officials, are on site near Amherst, S.D., with a full complement of clean-up equipment to contain the 795,000-litre spill in a farmer's field.

"TransCanada has taken this incident very seriously and is working with federal and state regulatory agencies," the company said in an update.

The company said it has observed no further environmental impacts and no threat to public safety, though the nearby Sisseton Wahpeton Oyate of the Lake Traverse Reservation has expressed concern the spill might contaminate water supplies.

Thursday's spill comes four days before Nebraska is set to vote on whether TransCanada can go ahead with Keystone XL pipeline, which would take a more direct route than the existing Keystone pipeline by going through Montana and South Dakota to Nebraska, where it would connect with pipelines that feed Texas Gulf Coast refineries.

Environmentalists were quick to point to the spill as reason to reject the Keystone XL project, but state officials said Friday the spill won't affect their decision.

The commissioners' decision will be based solely on testimony and documents during public hearings over the summer and from more than 500,000 public comments, Nebraska Public Service Commission spokesperson Deb Collins said.

A Nebraska law approved in 2011 prevents the commissioners from factoring pipeline safety or the possibility of leaks into their decisions. Lawmakers argued at the time that pipeline safety was a federal responsibility that pre-empts state law. Opponents say oil interests lobbied for the restriction.

The news might not sway the vote, but will bring greater focus to the issue, said James Coleman, an energy law expert at Southern Methodist University’s Dedman School of Law.

"It's the worst possible timing, and it's a reasonably big spill....I think most people expect the commissioners to approve it regardless, but nonetheless, it's not helpful."

Among other concerns, opponents of Keystone XL say the pipeline would pass through the Sandhills, an ecologically fragile region in Nebraska of grass-covered sand dunes, and would cross the land of farmers and ranchers who don't want it.

"There's some states where the big issue is climate change, but Nebraska, the issue has been those local land-use impacts, and so I'm sure the commissioners will have that in mind," said Coleman.

The spill near the border of Minnesota and the source of the Minnesota River has certainly raised concerns about Enbridge's (TSX:ENB) Line 3 pipeline replacement project in the state, said Coleman.

He said he wasn't sure, however, whether this Keystone spill will have an impact on current review of the pipeline in the state that's already approved elsewhere, but it certainly will add fodder to those campaigning against oil pipelines.

"I think that this will continue to be a bigger and bigger political issue because, as climate campaigners haven't had success in other areas, they feel like this is one area where they've been reasonably successful."

Protesters have already started setting up camps and planning direct action to stop Enbridge's Line 3 construction, which is already underway in Canada.

Pipeline opponents have also vowed to stop the Keystone XL pipeline if it is approved, having once declared victory on the project when Barack Obama rejected it in 2015, only for President Donald Trump to give the go-ahead earlier this year.

Shares of TransCanada (TSX:TRP) were down 1.2 per cent in early afternoon trading on the Toronto Stock Exchange, as the energy sector rose half a percentage point.

TransCanada shuts down Keystone oil pipeline after another leak

"Environmentalists were quick to point to the spill as reason to reject the Keystone XL project, but state officials said Friday the spill won't affect their decision."