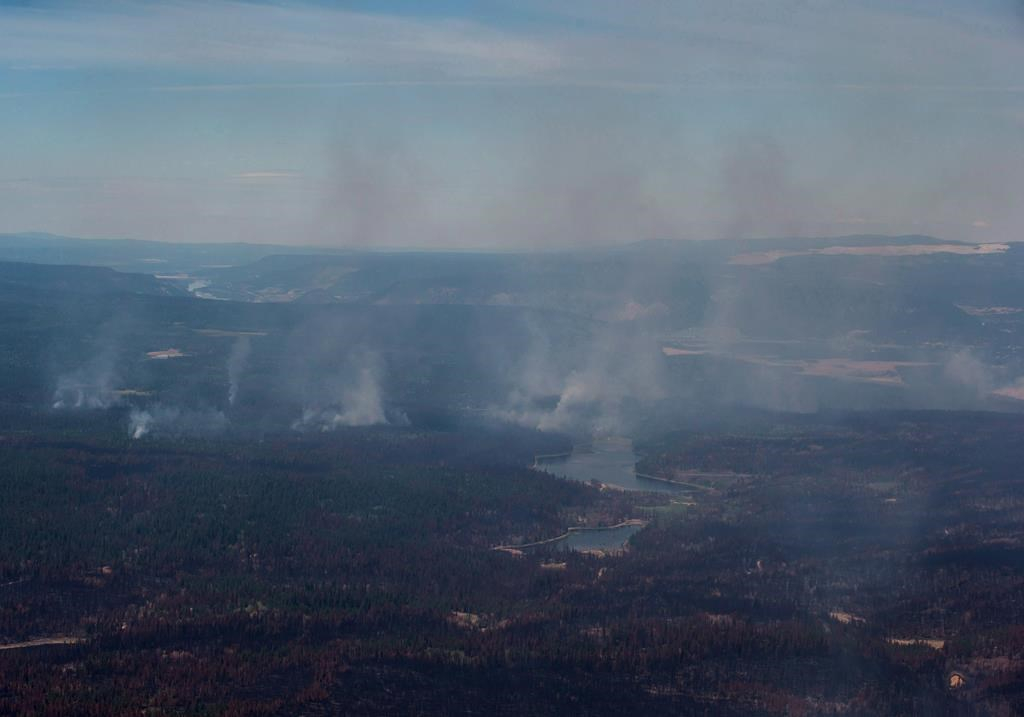 Aerial photo of wildfire in B.C. in July from Canadian Press
Previous story
Next story

When it comes to preventing forest fires, responsibility for the work is a complicated dance between the province and small, civic governments.

The worst wildfire season in recorded history hit British Columbia this summer. About 65,000 people were forced from their homes, more than 190 houses were destroyed and more than $550 million was spent trying to control more than 1,256 fires.

Small towns are caught between ensuring their residents’ safety and finding the money, time and resources to do work in the forests that some say should be a provincial responsibility.

When it comes to who is responsible for fire safety, there’s a lot of passing the buck.

That city is now lobbying the province for a community forest license, which would allow it to manage the area where the forest meets the city, an area that is the city’s greatest wildfire threat, but which has not been managed for fire, Simpson says.

“Only 25 hectares of actual fuel treatment work has been done in this area since 2007, a minuscule amount,” Simpson said.

He says his city has open and direct communication with the new government and that they seem keen to help, but he’s also concerned that work so far this fall is focused on salvaging the burnt areas and not on reducing risk in the rest of the forest.

“(They) do not seem to have learned the lessons from this year's fire season that would suggest they need to put a lot of attention on the fuel available for next year and subsequent years' fires,” Simpson said in an emailed response to National Observer questions. “In Quesnel's case, the fires were not close to the city and fringe areas, which simply means that our community is surrounded by forests that will be the fodder for the next major conflagration if they are not managed for fire protection.”

B.C.’s forests minister Doug Donaldson said the salvage efforts are a bid to reduce losses to the B.C. economy.

“What we’re focusing on getting the fire-impacted wood so that the green timber can be harvested in the mid-term, but there’s no doubt there will be some (economic) impacts in the mid-term,” Donaldson said.

The Union of B.C. Municipalities this fall called for the B.C. government to address wildfire risk in areas near towns and cities, saying the responsibility for wildfire prevention on Crown land should not fall to local governments and First Nations.

This request will definitely be part of a comprehensive review of the 2017 wildfire season, Donaldson said. He says municipal governments have told him that it’s a problem that small towns are responsible for areas outside their boundaries and that funds from municipal taxpayers are being used for non-municipal lands.

“Those are criteria for the program set up under the last government, but what we saw this summer means that we have to a major look at that granting program through UBCM,” Donaldson said.

Small towns struggle to come up with the money to do the prevention work, Donaldson said.

“We can look at how to tweak that program, make it better in the context of we’re spending $526 million on direct firefighting costs — that money is still coming from the same people paying taxes, no matter where they live,” Donaldson said.

Only 124 of 196 communities and First Nations have filed a Community Wildfire Protection Plan and just 63 have applied for FireSmart planning funds, a National Observer analysis of UBCM funded projects for fire mitigation programs shows.

The NDP government has committed $140 million to mitigating risks from future wildfires and most of that money will be used to hire people to do the work, Donaldson said.

That’s a positive move, because between 2002 and 2010, B.C.’s Forest Service lost one-quarter of its workforce, due to government cuts, a report by the Canadian Centre for Policy Alternatives found.

The numbers haven’t been updated and are not easy to recreate because a ministry shuffle in 2010 created a super-ministry called Forests, Resources, Lands, Natural Resource Operations and Rural Development.

However, the B.C. Government Employees Union has calculated that there were 4,029 people working in B.C.’s forests in 2000, while today there are only 3,873 working in the new combined ministry. In all of the province’s “dirt ministries” — those that manage the land and resources — there were 7,075 employees in 2000 and today there are 5,603, data provided to the National Observer by BCGEU researcher Megan Scott shows.

The new jobs Donaldson is promising with the $140 million are a drop in the bucket of the $3.5 million that UBC professor Lori Daniels told the National Observer would be needed to treat the entire province.

Logan Lake has taken matters into its own hands

While much of B.C. went up in flames this summer, the small town of Logan Lake near Kamloops was spared the worst of the fires, thanks to 13 years of preparation.

When a small fire broke out in the community, firefighters were able to put it out within a few days, fire chief Dan Leighton said.

“Even though it was extremely windy, that fire was kept at bay because it could not climb the trees,” Leighton said. “It stayed down low in the trees and on the moss on the ground because all of the laddering fuels had been removed in that area.”

The town regularly clears small trees and debris from forested areas near the town, even on Crown land, something they have done since the Kelowna wildfires of 2003. The work is paid for with grants from the province, but it also takes a lot of Leighton’s time and a big commitment from the town’s council.

“Everything is about money and time,” Leighton said. “In Logan Lake here, I and the community take every effort to find initiatives to protect ourselves.”

Logan Lake is the first “FireSmart” community in Canada, Leighton said. FireSmart is a set of criteria that individuals and communities can use to protect themselves against risk from wildfires. For more on what people can do as individuals to protect their homes, see related story here.

Cache Creek mayor would rather see money spent on tourism

John Ranta, mayor of Cache Creek and chairman of the Thompson-Nicola Regional District where 200 homes were lost to wildfires this summer, says the province hasn’t been doing any forest mitigation work that he’s aware of around Cache Creek, but he’s okay with that.

“I pay enough taxes already,” Ranta said. “If we go hat in hand to the government for every initiative that every citizen thinks of, the taxes will get unmanageable at some point.”

Instead, he would prefer to see more support for tourism, to help businesses recover from their losses of this summer.

Donaldson says his government has already committed $1.2 million to try get people coming back to B.C.’s Interior towns, including $500,000 from Destination BC and $200,000 grants to each to both the Thompson-Okanagan Tourism Association and the Cariboo-Chilcotin Tourism Association.

The federal government also has a role to play, particularly when it comes to First Nations communities, Donaldson said. Also, he’s hoping to leverage some provincial funding for wildfire mitigation to get federal money directed at climate change.

All levels of government have responsibilities when it comes to keeping their citizens safe from forest fires. Whoever foots the bill, it’s clear the time for action is now.

Tracy Sherlock writes about the B.C. government for the National Observer each week. Contact her with news tips at tracy@nationalobserver.com.