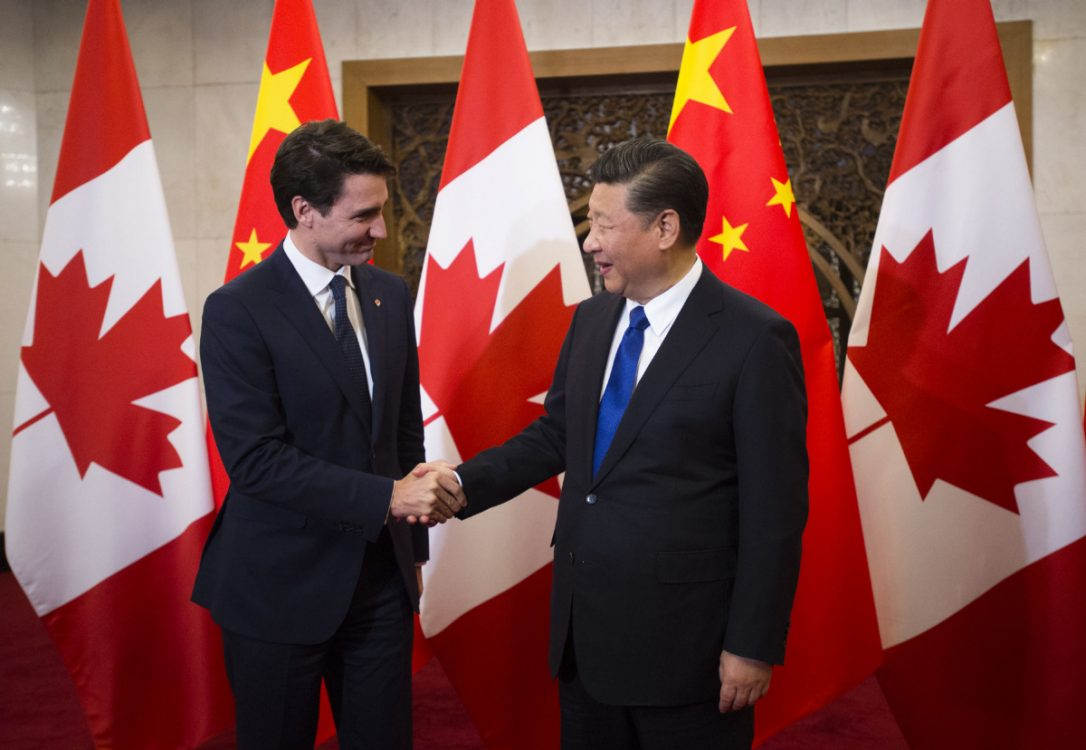 Prime Minister Justin Trudeau meets Chinese President Xi Jinping in Beijing on Dec. 5, 2017. The Canadian flags in the background have incorrect inside corners. Photo by The Canadian Press
Previous story
Next story

Canada's foreign affairs department says China and the United States are "responsible" for supplying fake Canadian flags that have been used as backdrops during visits abroad by Prime Minister Justin Trudeau.

The statement comes after Trudeau appeared with Chinese President Xi Jinping this week in front of what appeared to be erroneously-designed Canadian flags — and not for the first time.

The National Flag of Canada features a maple leaf with rounded inside corners, according to an official Department of Canadian Heritage graphic. Photos and video published by The Canadian Press, The Associated Press and Reuters all show that the flags positioned behind the prime minister when he met with top officials in China this week have pointed inside corners.

Canada's foreign affairs department admits there have been "slight variations" in the flags that have been used.

"During official visits, the host government is responsible for supplying the flags that will be flown or displayed. There are instances when slight variations are present due to the manufacturer’s limitations," said Global Affairs Canada (GAC) spokeswoman Brianne Maxwell.

She didn't immediately explain what kind of limitation would prevent a manufacturer from printing an image of a maple leaf with rounded inside corners.

Eleanore Catenaro, press secretary for the prime minister’s office, declined to answer questions, referring them instead to GAC.

It is not the first time Trudeau has appeared in front of strange-looking Canadian flags while abroad. Last year, Canadian Press and Associated Press photos also appeared to show inaccurate flag design when Trudeau visited China in August 2016.

Yang Yundong, press and public affairs counsellor for the Embassy of the People's Republic of China in Canada, acknowledged receiving questions but did not respond by publication. 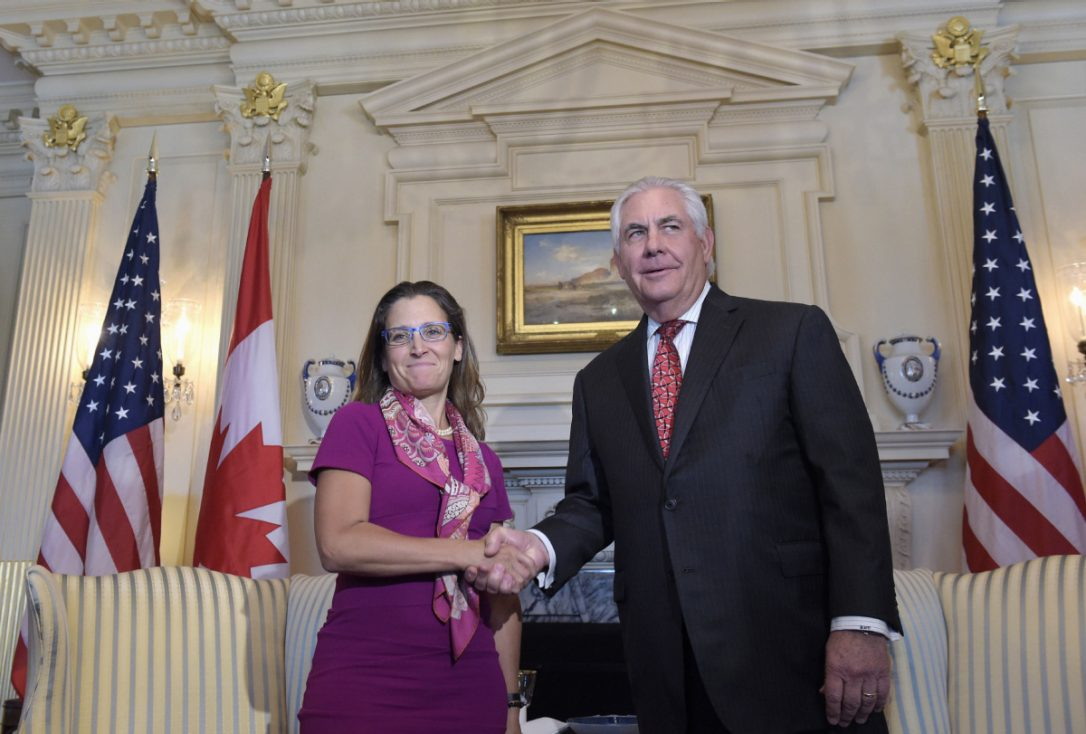 The issue is not confined to China. Trudeau appeared in front of a pointy maple leaf with former U.S. president Barack Obama outside the White House in 2016.

It's also not confined to Trudeau. When Foreign Affairs Minister Chrystia Freeland met with U.S. Secretary of State Rex Tillerson in Washington, D.C. this past August, an Associated Press photo of their meeting appeared to show another pointy maple leaf.

Andrew Heard, a professor of political science at Simon Fraser University who studies Canadian constitutional and institutional issues, was puzzled.

“I do agree with you that the Canadian flags shown behind Xi and Trudeau do not have the correct rounded inside corners,” said Heard. “This is very strange indeed. It is unfortunate symbolism that a poor version of our flag is shown at trade meetings.”

National Observer first asked questions about the pointy maple leaf after Freeland’s meeting in Washington in August, but did not receive an answer from Freeland's office. Freeland's press secretary Adam Austen said he had directed questions this time to GAC.

The act states that no Government of Canada office shall "purchase or use a national flag of Canada for government purposes unless it has been manufactured in compliance with the applicable standards for manufacture and use thereof established by the Canadian General Standards Board."

The Canadian flag, as well as the flags of the provinces and territories, are "symbols of honour and pride for all Canadians," Canadian Heritage states on its website. "They should be treated with respect."

Trudeau, Xi face off on future of trade as PM China trip begins in earnest

Flags probably manufactured in China.
Trade agreements with China? Be careful what you wish for.
Caveat emptor.

I once had a Chinese-made

I once had a Chinese-made Kitchen Aid food processor 'with instances when slight variations were present due to the manufacturer’s limitations', that made me have to throw it in the garbage. I get it.

This is [almost] a good news

This is [almost] a good news story. If this was all we had to worry about.

What's the big deal? We must

What's the big deal? We must know after a few decades of buying that Chinese junk that much of it is cheap, some of it is dangerous, and none of it is necessary for a prosperous Canada. Seriously folks. We're going to burn our way through more bunker fuel to bring those containers of dollar store stuff to our shores...then blow some more of it in the planet's face to sell them our agri-business raised beef and canola?

We really are open for business...to the ends of the earth.

Enough of "fake" everything!

Enough of "fake" everything! From our million-word vocabulary, how about incorrect, counterfeit, flawed, unapproved, improper, unofficial, imitation, unsanctioned, crude, inaccurate, inapt, faulty...
There is a wide selection to cover the distance between malicious intent and careless incompetence.