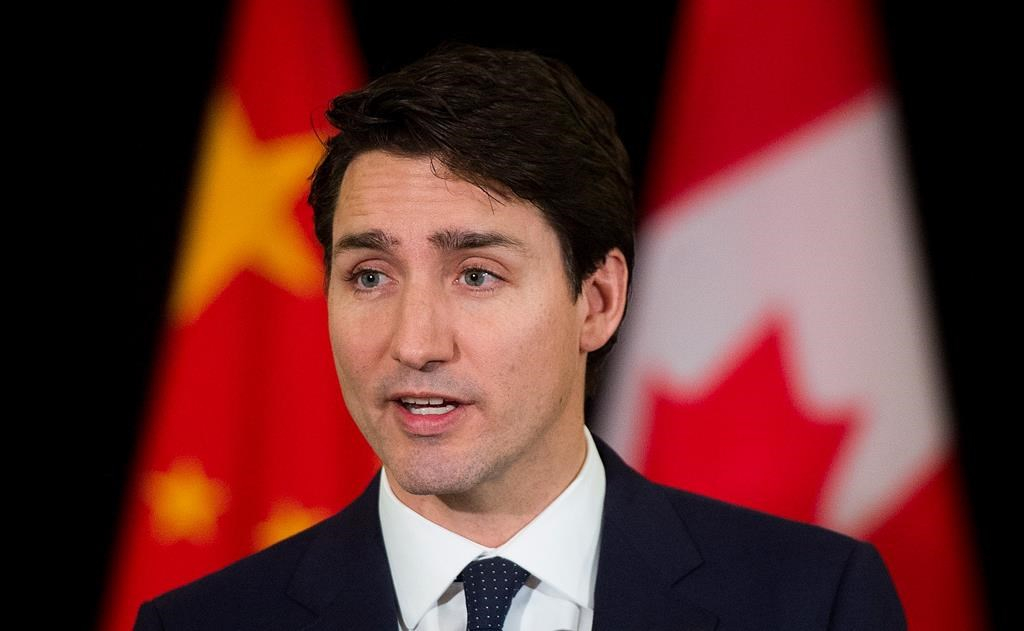 Trudeau capped the first leg of his China trip in Beijing on Tuesday meeting the country's powerful president as talks continued to formally kickstart free trade negotiations between the two countries.

Xi Jinping welcomed Trudeau with a handshake at a red and gold glittering guesthouse nestled in a manicured compound with ponds and waterfalls. He noted the prime minister had been having busy and productive meetings in Beijing.

"I know that as we look to building a better future for the entire world the friendship between Canada and China will play an important role in setting the tone and the approach that will characterize the 21st century," Trudeau replied.

The prime minister remained hopeful that Canada and China could forge ahead with a full-fledged trade deal that he said would benefit working people in both countries.

Trudeau characterized his trade ambitions with China, NAFTA and pursuing other deals in Asia, including a new version of Trans-Pacific Partnership, as part of Canada's fight against the protectionist tide most closely associated with the Donald Trump administration in Washington.

"It's a time where there is much political space given up in various countries for populism or resurgent nationalism. And Canada stands strongly as a country that is making a case for international trade that benefits everyone. We will continue to do that," he told reporters before his meeting with Xi.

"We take very seriously the responsibility we have to improve NAFTA to benefit both Canada, the United States and Mexico," Trudeau said.

"Canada is not in the business of trying to create a zero sum game or create winners or losers in trade deals."

After his Beijing meeting with Xi, Trudeau flew south to the city of Guangzhou for the Fortune Global Forum, a major conference of international business leaders.

Trudeau said he would not hesitate to raise human rights concerns with Xi, who has become China's most powerful leader in decades.

He said he's raised specific consular cases, and the inability of Canadian diplomats to visit some Canadians in prison.

The meeting with Xi follows Trudeau's talks on Monday with Li, where they were not able to announce the start of formal free trade talks that would move beyond the current phase of exploratory discussions.

International Trade Minister Francois-Philippe Champagne was noticeably absent from at least two public events that three fellow cabinet ministers attended with Trudeau on Tuesday because he was continuing the trade talks with Chinese counterparts.

Champagne stayed behind in Beijing instead of travelling with the Trudeau entourage to Guangzhou. His spokesman had boarded the prime minister's plane and suddenly left while the aircraft was idling on the tarmac and at least two of Champagne's aides were pulled off the plane at the last minute.

Trudeau said there wasn't one particular issue that held up movement to the next phase but he wants a progressive trade deal that includes addressing issues such as gender, the environment and labour.

Trudeau touted the lower-level agreements the two countries inked Monday on energy and the environment, agriculture and education as ways of incrementally moving relations forward as part of his new annual leaders' dialogue.

"Whether there are formal negotiations or simply exploratory talks, we are constantly engaged with our Chinese counterparts."

The Canadian Cattlemen's Association said the agreement reached Monday could generate $125 million in new beef exports to China in the next five years, while the exploratory free trade talks continue.

"We know that they're working on it. Things haven't stopped," John Masswohl, the association's international relations director, told reporters in Beijing.

China imposes a 12-per cent tariff on Canadian beef, while Australia faces a seven per cent tariff that is gradually being phased out through their free trade agreement with China, he said.

The agriculture sector's enthusiasm for free trade with China contrasts with some other 600 businesses, academics and civil society groups who took part in government consultations.

Some expressed fears that a free trade pact with China could kill Canadian jobs and reduce their ability to compete against China's lax labour standards, lower environmental requirements and state subsidies.

Masswohl said opening new markets for Canadian beef in China is crucial. "Right now our biggest risk is we ship 270,000 tonnes of beef to the United States, and possibly facing losing that NAFTA agreement with the United States, which I think is a possibility."

Trudeau told a large boardroom of three-dozen business leaders on Tuesday morning that China and Canada are continuing their exploratory discussions on a comprehensive trade deal.

The government wants to establish a framework with China that would broaden the talks to include the environment, governance, labour and gender issues before deciding to formally begin trade negotiations.

"We know that creating a strong framework in which investments and businesses and the rules that surround the operations of Canadian companies in China, and Chinese companies in Canada will be laid out, and predictable, is something that everyone is looking for," Trudeau told the business leader off the top of their one-hour closed door meeting.

"I know how important predictability and smooth understanding of the context in which we are, is important for business decisions."

"The formal free trade talk is a critical point that this mission's about. We're optimistic that eventually we'll get to where we need to, to move forward," said Preston Swafford, the chief nuclear officer for SNC Lavalin, which is vying for a slice of the clean energy market in China.

"They're still working. The term is: the cake is not baked yet."

Trudeau, Xi face off on future of trade as PM China trip begins in earnest