By Toula Drimonis | Opinion, Politics | December 14th 2017
#44 of 116 articles from the Special Report: State of Journalism 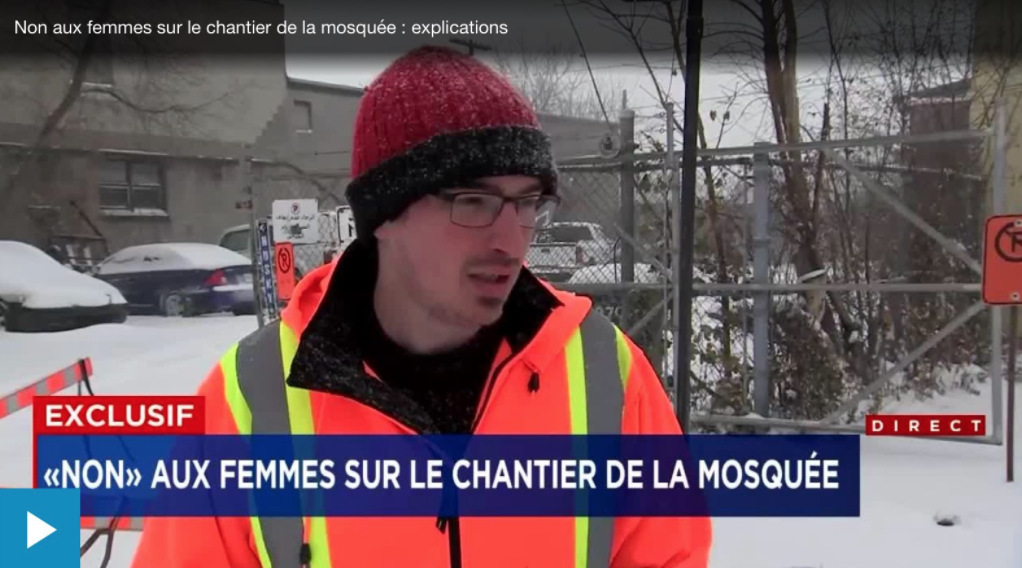 A video report by Quebec's TVA Nouvelles describes an incident when female construction workers were allegedly asked not to work near two Montreal mosques during Friday prayers. All of the facts are in question. Screenshot from Twitter
Previous story
Next story

As the old adage goes, a lie can travel halfway around the world while the truth is putting on its shoes.

A badly-sourced, unverified news story that serves to reinforce people’s beliefs can apparently do the same.

On Dec. 12, TVA Nouvelles published a story alleging that female construction workers had been removed from a construction site near two Montreal mosques. According to the story, the demand was made to the construction company by mosque administrators who didn’t want women near their place of worship during Friday prayers.

In the article, Catherine Fournier, Parti Québécois status of women critic, is quoted in French as saying: "It goes against the Charter of Rights and Freedoms of Quebec. I find it completely unacceptable that religion is used as a pretext to violate equality between men and women."

Former Parti Québécois minister Bernard Drainville shared a link to the TVA report while tweeting, “women pushed aside by religion? Whatever the religion might be, it’s NO!! U-NA-CCE-PTA-BLE!!”

Quebec Solidaire MNA and co-spokesperson Gabriel Nadeau-Dubois also shared the article, characterizing it as an “unacceptable demand." He said "men and women are equal on construction sites."

Quebec Premier Phillippe Couillard, who took a more cautious approach, told CTV's Quebec bureau chief Maya Johnson that “if this is the case, it’s totally unacceptable.” The labour minister, he added, had instructed the Quebec Construction Commission (QCC) to investigate.

The report spread like wildfire and as public indignation grew, someone created a Facebook event for a protest in front of the mosque this Friday.

The only problem with all of this? TVA had never bothered to fact-check the story with the people it targeted. The mosque in question had never even been approached to comment before the story was published.

Mere hours after the TVA report, one of the mosques in question issued this statement:

“The Ahl-ill Bait Mosque vigorously denies all that has been alleged in the video report made by journalist Marie-Pier Cloutier on TVA Nouvelles. There have never been such requests for accommodation from the mosque’s management.

"We do not understand why national media did not carry out a full investigation. The mosque has never been contacted. These allegations are prejudicial to us and we are extremely saddened that such a report was broadcast.”

According to the Montreal Gazette’s Steve Faguy, by the evening of Dec. 12, French-language daily the Journal de Montréal had already pulled the story from its website and Facebook page because its accuracy was being questioned.

Mosque administrators followed up with an official press release the following morning, where they reiterated that “they had never demanded the exclusion of anyone, and if any such demand had been made, it never came from their organization.” They questioned again why such a report had been published by an important media outlet without “verification or confirmation.”

But why let the truth get in the way of a good story?

The truth is out, but the lies still spread

In the early morning hours of Dec. 13, and despite lingering questions, many media outlets were still repeating the TVA report as originally published, some including interviews with QCC president Diane Lemieux who confirmed that they were verifying the story.

The TVA story was still online almost a full day later. No correction or other kind of statement has been added to the original story. In fact, a second TVA story reported, once again, that “women had been excluded from the construction site” and that QCC wanted to shed light on this “extremely sensitive file.”

Conducting its own investigation, La Presse reported that the Electrical Services Commission managing the construction site in front of the mosques denied ever receiving a demand to relocate the female construction workers, even though the TVA article spoke of “irrefutable proof” that such a demand had been made.

Did an overzealous member of the mosque take it upon themselves to urge the contractors to remove the women? Was there a misunderstanding? Is it a concerted ploy by someone to make the mosque look bad and stir up negative publicity?

We don’t know, and all we can do is wait for the results of the investigation while an endless game of “he said/he said” plays out.

It is deeply irresponsible and problematic that inaccurate and unconfirmed reports such as these would be published by a major media outlet. Its potential for public harm far outweighs any potential short-term media gain of obtaining a “scoop” first or increasing one's number of online hits.

Unsurprisingly, extreme far-right group La Meute has already stated they're planning a protest in front of the mosque, to indicate to its members that they are “denouncing this revolting act against women,” and to “show these people that here in Quebec men and women have the same rights and we won’t tolerate such disrespect towards Quebec women.”

What’s particularly egregious about the grandstanding that La Meute and other xenophobes are engaging in, is that they are using the pretext of defending women’s rights to spread their distasteful and dangerous brand of fear-mongering and intolerance. There is no reason to believe that La Meute will cancel its protest, even if between now and Friday the TVA report is declared to be erroneous. Any feeble and tenuous reason is good enough to promote their hate.

This is where the danger of erroneous reporting lies: it can so easily be used by those who want to profit off people’s prejudice and ignorance, to advance their dubious causes. The day after the Quebec mosque shooting, Couillard stood up in the National Assembly and solemnly stated that “spoken words matter. Written words matter.”

Time to be twice as vigilant

In this present climate, politicians and news outlets should be twice as vigilant and twice as reticent to repeat information or propagate a story without due diligence. Politicians eager to jump on the public outrage bandwagon for short-term political gain are also just as guilty.

Religious intolerance often takes on additional layers here in Quebec, with anything that even remotely resembles a religious accommodation looked upon with skepticism. Both politicians and the public are quick to jump the gun to defend gender equality and secularism the moment a controversy is brewing. But because this is an easy button to push, intolerance and xenophobia have permeated the political rhetoric with an ease and a frequency that should be alarming to those who believe in human rights and religious freedom.

For the record, Quebec’s construction industry has a serious sexism problem that has very little to do with this specific controversy at hand. Sexual harassment and unequal pay have contributed to the province having the lowest percentage (1.3 per cent) of women working in the field throughout the country, and the government has launched programs intended to help us reach the very modest Canadian average of three per cent.

And yet, with the exception of concerned women’s groups like the Quebec Council on the Status of Women, I’ve never seen any real interest in the working conditions of Quebec female construction workers by the general public. Not until the possibility of hypothetical Muslim men denying them equal rights came up, that is.

In fact, the Quebec Commission of Human Rights and Youth Rights reports that very few religious accommodation requests are made and even fewer are marred in controversy.

But if you were to ask Quebecers, I suspect they would quote a much higher number.

Perception is reality, and journalism that easily and irresponsibly reinforces stereotypes and false perceptions only causes harm and societal strife. In a time when far-right xenophobia is gaining ground, and where Quebec provincial elections are looming in the not-too-distant future, it’s imperative that reporters investigate sensational and sensitive stories with the diligence that is necessary.

Stories that serve to marginalize and vilify communities that are already facing the brunt of prejudice and racism should be fact-checked with prudence before being published and used as a pretext to rally for human rights.

The women’s movement already has its share of challenges and barriers to overcome — it doesn’t need racist neo-Nazi groups coming to their aid, thanks to careless news reports trying to profit off sensationalism. We owe all Quebecers due diligence when reporting the news. That also includes Muslim Quebecers.

And what will be the

And what will be the consequences for those who originated the report, and those who repeated it?

I'm not really sure, Jeff.

I'm not really sure, Jeff. TVA is not a member of the Quebec Press Council so no real repercussions there. Have not heard of any legal action from the mosque itself at the moment.