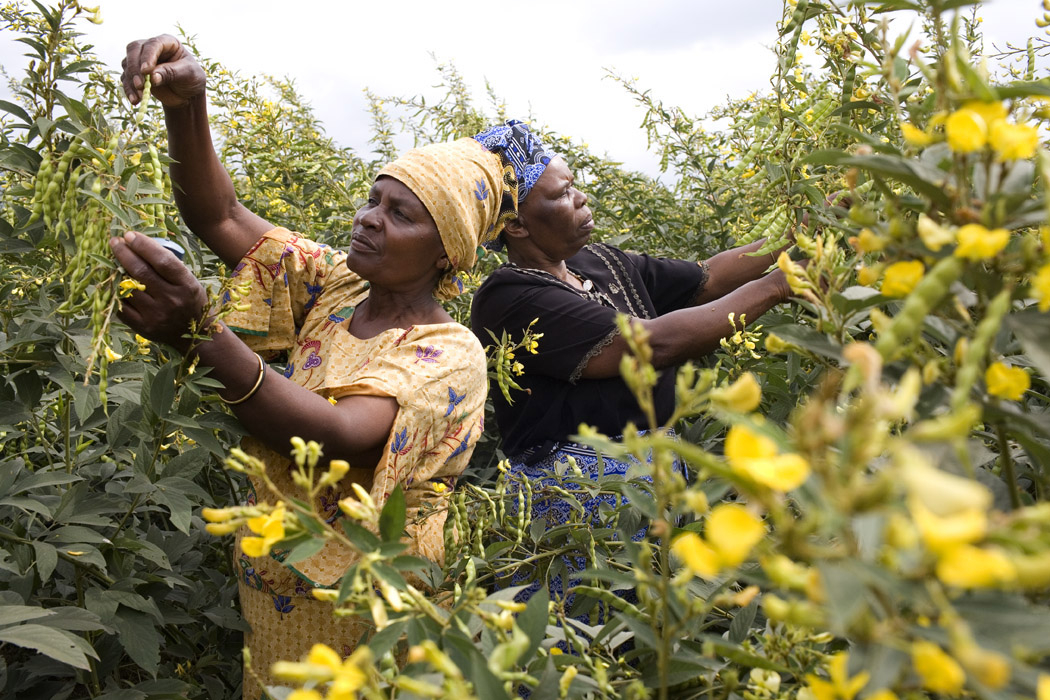 Not so long ago, Senegalese scientist Diaminatou Sanogo decided to help a small rural village in West Africa fight back against the pounding it was taking from harsh changes to the climate.

Daga-Birame is a farming community of about 800 people in Senegal.

Its harvests have suffered droughts, floods and wind erosion, but in 2011, Sanogo began a mission to transform Daga-Birame into a "climate-smart village."​

She believed that a specialized team could help the villages cope with their new reality by equipping them with tools and techniques that would allow them to boost production and income from crops, using drought-resilient varieties of maize and millet.

It was a collective effort led by the Consortium of International Agricultural Research Centers along with Sanogo.

She was also motivated by one of the important conditions of their projects: the fact that they are required to ensure that women play a key role.

Sanogo, director of the Senegalese National Center of Forestry Research, said she's particularly interested in this requirement based on what she's seen on the ground as a woman herself.

According to a Food and Agriculture Organization (FAO) 2017 report, women make up 47 per cent of Sub-Saharan Africa’s agricultural workforce. Men are increasingly migrating to cities, noted the intergovernmental organization's report. This leaves women in charge of crops and livestock.

But the FAO also found that women in developing countries do not often own land, or make decisions about land, despite playing such a significant role in the agriculture sector. Half of the world’s countries have laws guaranteeing equal access to land for men and women, but customary practices still prevent women from controlling it, found another study by UN Women in October 2016.

“Women are not really involved. They take care of most of the job but they’re not in the decision part, they don’t have the production factors to do so,” she explained at a food security conference in Quebec City in September.

In the climate-smart village in Daga-Birame, women told Sanogo and her colleagues that they wanted to contribute to climate change adaptation at home, but lack of land ownership was an obstacle. Sanogo then asked the community to give women residents a five-hectare parcel of territory, as part of the climate-smart initiative.

The village complied, and the women surrounded their plot with a fence. In their garden, they grew watermelon, okra, mint and pepper to add nutritional diversity to their diet and to sell in the market for extra income.

The women were trained alongside men in new agricultural techniques, like micro-dosing fertilizer, agroforestry (combining tree and crops in fields), and establishing protected areas where fire and wood cutting are forbidden to prevent erosion. Sanago wanted to promote their role in climate change resilience and land ownership cautiously, so as not to “creating a divide” in the community.

“We need a balance, we need to bring men to work with women,” she told National Observer.

The project in Daga-Birame was led by Consortium of International Agricultural Research Centers, a global partnership for food security research. It's part of a climate change, agriculture and food security program that has so far seen 15 climate-smart villages created in East Africa, West Africa and South Asia. More are currently underway in Latin America and Southeast Asia, as the program works with local partners and researchers to identify practical climate adaptation solutions for smallholder farmers.

In Daga-Birame, improved strains of maize and millet were introduced, and initial results showed a 50-per-cent increase in yield. Five new fruit tree species were also introduced to help prevent soil erosion and create new income for the villagers who could sell the fruit.

Meriem Houzir, a Moroccan consultant in sustainable development and international co-operation for organizations like UN Women, told National Observer that the development community still has a long way to go in creating gender-balanced programming.

“It’s a very trendy topic at the moment — everyone talks about gender-based approaches, of gender inequalities — and while there are still some initiatives from the international community, when we go on the ground, we realize we’re still lagging behind on that front,” she said in an interview at the Quebec City conference.

Houzir said initiatives in agriculture too often target and train household chiefs with new technologies to track the weather, but forget that women are the ones who primarily take care of the day-to-day farming and livestock duties.

As climate change is increasingly discussed at international meetings, she thinks negotiators often forget the importance of agriculture and its central place in women’s livelihoods in many parts of the world.

“The weak links in climate negotiations are agriculture and women," she explained. "We are all convinced (about that) at UN Women, and yet we see there are troubles putting into place gendered approaches."

The Trudeau government has a feminist international assistance policy led by Global Affairs Canada that vows to involve women in all international efforts.

However, there has been some criticism that there is no specific priority on agriculture among the six action areas forming the policy: gender equality and the empowerment of women and girls, human dignity, "growth that works for everyone," environment and climate action, inclusive governance, peace and security.

There's a critic in Canada

One critic of policy's agriculture gap is Faris Ahmed, director of policy and campaigns at USC Canada, an international non-profit organization focusing on agriculture. He says that since women in developing countries are heavily involved in agriculture, if Canada’s foreign policy had a greater focus on the industry, it could reach more women through agricultural initiatives.

“You probably won’t be implementing (feminist policy) very strongly if you don't do it through agriculture, because that's where women are," he told National Observer. "You have to go where they are to get them to realize their rights and empower them."

While Canada had been a leader in global agriculture and a global “champion of food security” in the past, Ahmed said its food and agriculture aid has declined. Canada has fallen from being the sixth-highest donor of food and nutrition security aid as a percentage of gross national income in 2015, to 10th on the list in 2017.

While there is no specific action area named for agriculture in Canada's feminist foreign aid policy, Global Affairs Canada spokeswoman Amy Mills said it will be addressed across the six core areas. For example, she explained, a policy area called “growth that works for everyone” will include programming for sustainable agriculture to improve economic opportunities and the resilience of rural women.

“It will improve women’s incomes and productivity through greater adoption of climate-smart methods of food production,” she said in emailed comments.

In the fiscal year from 2015 to 2016, Mills added, the government funded about 175 projects in support of gender equality in the agriculture sector, valued at approximately $280 million. One of the projects, led by Oxfam Québec in Nigeria, aims to improve the nutrition and income of 10,000 vulnerable farming households through training and technical support for farmers, women and youth. Global Affairs Canada is contributing with $13.6 million over a five-year period, from 2016 to 2021.