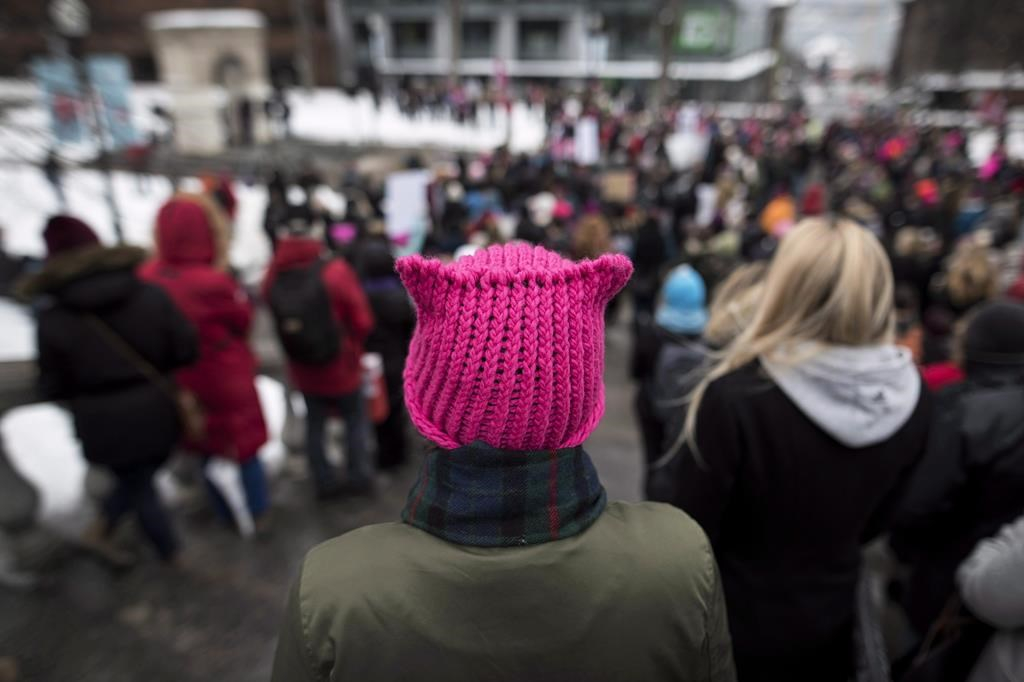 A woman wears a pink "pussy hat" while joining the Women's March in solidarity with women and human rights groups across the world in Halifax on Saturday, January 20, 2018. Photo by The Canadian Press/Darren Calabrese
Previous story
Next story

A minister in Alberta's NDP government has chastised a tweet by the Opposition's communications chair that slammed women's marches held over the weekend.

Status of Women Minister Stephanie McLean was responding to a Twitter post on Saturday from Sonia Kont of the United Conservative Party, who stated that "ideological marches like the one in Washington" do not empower women.

Kont added that the last time she checked everyone had the same rights in society, and the march lacked clarity and purpose.

McLean responded that the UCP "ridiculed the strength of women marching together in solidarity and using their voices fighting for equality."

Dozens of marches were held in communities across Canada on Saturday, a year after women's marches that sprang up around the globe in the wake of Donald Trump's inauguration as U.S. president.

The event drew a large crowd at the provincial legislature in Edmonton, and an even larger one in Calgary.

"What rights have women lost in the United States or Canada? It's a shame these marches don't say a word about the horrific conditions women face in the Middle East," Kont tweeted in response to criticism of her initial posts.

"Did this march also voice support for Iranian women or the Kurdish female heroes fighting ISIS? How about the Saudi Arabian women? They deserve rights and freedom too."

McLean, meanwhile, noted that women face a pay gap with men, are responsible for more childcare, make up only a fraction of corporate boards, and face other issues such as domestic violence.

A number of people supported McLean on Twitter, including one who linked to a tweet by former prime minister Kim Campbell.

"What I love about these marches are that they are everywhere," Canada's first and only female prime minister said. "And there are LOTS of great MEN smiling and marching with the women!"

But there was also support for Kont, including a tweet from fellow UCP member Bettina Pierre-Gilles, who is listed on the party's website as a member of its policy committee.

"I couldn't agree more with you Sonia. I'm a proud advocate for women and working our way to the top," her tweet states.

"These marches indeed only sends a message that only the loudest few can be heard, while nothing is advocated on policies."

UCP Leader Jason Kenney added his own voice to the discussion on Sunday evening.

"Proud that the United Conservatives have so many strong, outspoken women as members. Our party doesn't force conformity. Members are free to hold differing views," Kenney tweeted.

Canadian organizers said Saturday that 38 communities were hosting marches, rallies and other events.

Police in Calgary tweeted their own support for the event in that city, along with a picture of a uniformed officer with marchers.

"We were honoured to not only ensure the (march) was safe for all participants, but also to show our support by taking part," the tweet from the Calgary Police stated.

Women's movement has come a long way since their march on Washington: Activists

Good for the Status of Women

Good for the Status of Women Minister. Now, why not take a stand regarding the issue for women and children: Multistage, High Pressure fracking. It's women and children first with fracking. Young children with developing physical and neurological systems are at greater risk, shown by innumerable studies; women's bodies are smaller and less able to eliminate toxins. Yet, Alberta's Government is providing royalty incentives and easier access for fracking operations. More and more countries are banning fracking. Where is the Alberta NDP and its promises?

Good for Stephanie McLean. While the marches may seem to lack clarity and purpose to some folks....busy working their way to the top....whatever that means, they are signs that young women are starting to understand who pays the price for our current system.

As a senior who was involved in the women's movement decades ago...I have been shocked, but not surprised, to learn recently how little real progress we made in protecting women from the cultures of toxic masculinity that continued to function in our police forces, fire departments, entertainment industries, and political organizations.

Me Too is revealing a very ugly truth about what happened to the Third Feminist Wave. And the Oxfam report on inequality just released, adds valuable data on what we have to confront now.