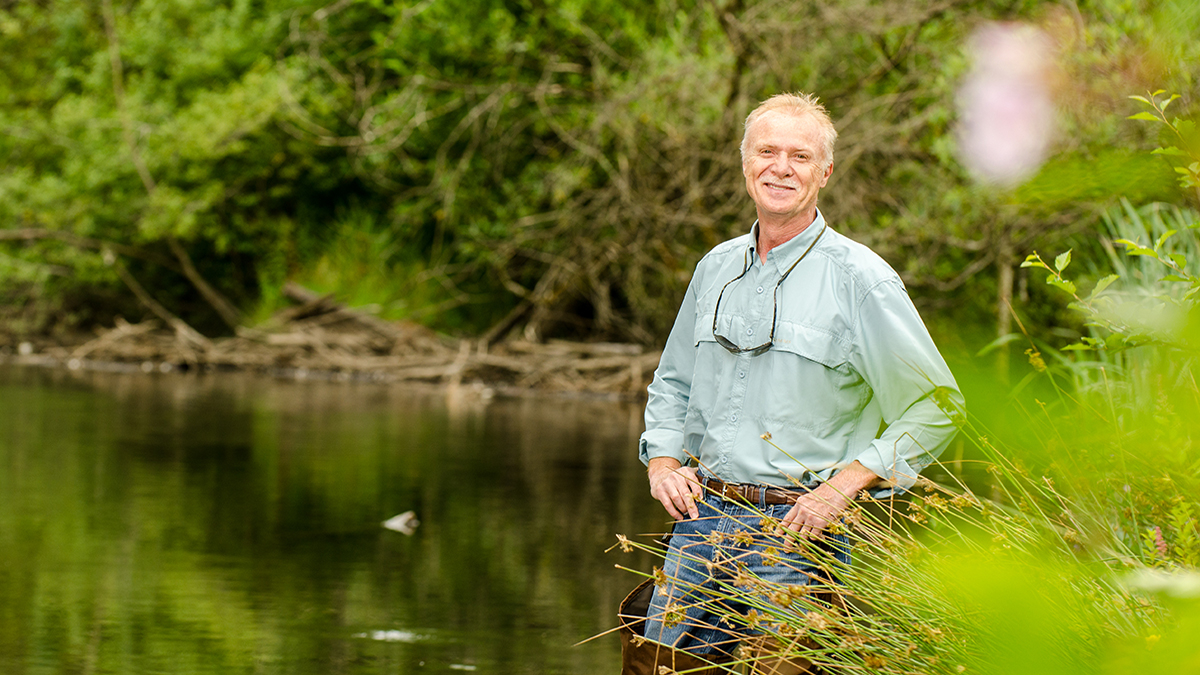 River conservationist Mark Angelo told the National Energy Board on January 24, 2018, that a the Kinder Morgan Trans Mountain pipeline expansion would be disruptive to the Brunette River in Burnaby, B.C. Photo by BCIT Commons
Previous story
Next story

The City of Burnaby, just a stone's throw from Vancouver, is a longtime opponent of the company's plan to add 980 kilometres of pipeline to ship oil from Alberta to a local marine terminal.

Municipal representatives argued vehemently at National Energy Board (NEB) hearings this week that the Texas-based company is ill-equipped to mitigate damage to local ecosystems or respond to such emergencies as a fire at its tank farm or an oil spill.

The NEB hearings in Burnaby, to examine the exact route of the $7.4-billion pipeline expansion, is scheduled to continue until the end of the month. The expansion will allow the pipeline to transport up to 890,000 barrels of diluted bitumen a day from Alberta and will cross through Langley, Surrey, Coquitlam and Burnaby.

Mark Angelo, a witness with expertise in Burnaby's creeks and rivers, said the proposed pipeline route would damage the Brunette River Conservation area and its waterways.

A vital area for fisheries

The protected area has been cleaned up over the past few decades, and salmon have recently returned to the waterways, he told the board's panelists on Wednesday. He’s seen eagles, herons, bobcats, bears, mink, coyotes, river otters and peregrine falcons in the area — a key ecological linkage between Burnaby Mountain, Burnaby Lake and Deer Lake, that allows animals to move back and forth across the city.

“To see this occur in such a large, urban environment is so rare and so special that the city deserves great credit for that,” Angelo said. “It’s a very special place.”

Angelo is retired and testified as a volunteer for the City of Burnaby and not a consultant, he said.

It’s a vital area for fisheries, he added, and in 2012, the region saw its first major run of chum salmon in Still Creek in 90 years. All of those fish swam up the Brunette River, which was restored after being badly damaged and polluted, he explained.

“Of critical concern is the fact... that the route proposed through most of Burnaby does not follow an existing route... rather the proponent has chosen to carve through the Brunette River Conservation Area in addition to some other key green spaces in our city,” he said.

Angelo urged the use of trenchless, directional drilling to build the pipeline, rather than the use of open-cut methodology, which he said would “physically disrupt and damage both riparian and in-stream habitat."

Trans Mountain vice-president of operations Michael Davies argued before NEB panelists that due to the region's topography, the company couldn't use the trenchless drilling method.

Angelo noted that Trans Mountain had previously stated it would use trenchless drilling in areas of riparian vegetation. That technique was also among the draft conditions for approval outlined by the NEB for waterways with nooksack dace, an endangered fish recently spotted along the Brunette River.

"We have had conversations with the city through our technical working groups, and we aim to continue those conversations about these topics," said Kinder Morgan external relations manager Lexa Hobenshield during the hearings.

When reached for additional comment on this story, Kinder Morgan provided a link to its environmental protection plans. The company has previously said the pipeline can operate safely through strict adherence to more than 150 environmental, financial and technical conditions.

Supporters of the expansion argue that it is needed to create jobs, bring Albertan oil to tidewater, and boost provincial economies that have struggled with slumping oil prices. Trans Mountain has previously said the pipeline can operate safely through strict adherence to more than 150 environmental, financial and technical conditions.

Jim Wolf, a senior long-range planner for the City of Burnaby, warned of risks to the Cottonwood Park area at the foot of Burnaby Mountain, which already is home to a BC Hydro utility line and a jet fuel pipeline.

“The temporary workspace (for the pipeline) that is planned will be devastating for this park,” Wolf said. “We will lose forest, we will lose trees that have sat there, survived, from many generations ago.”

Wolf argued that the pipeline is not in the national interest.

“When we as a municipality take on these issues, we expect that other levels of government will support us,” Wolf said. “What’s in the local interest should be in the national interest in this case.”

The federal government approved the Trans Mountain expansion in November 2016, subject to 157 environmental, financial and technical conditions. By contrast, B.C.'s new NDP government has vowed to "every tool in the tool box" to stop it.

Erik Lees, a consultant for the City of Burnaby, explained the importance of the Eastlake Greenway, an area that would be affected by the pipeline, including the loss of several trees. Greenways are not just walkways, he said.

“Greenways are the lungs of the city, they produce oxygen, trap particulates and contribute the air quality of Burnaby and across the region, but greenways are also the veins and arteries of the city and even the heart.”

The city’s witnesses also expressed concern that the proposed pipeline route changed after Trans Mountain's initial consultation with Burnaby, and that the community hasn’t been consulted on the new route that runs through the conservation area.

Pressed on whether the company would require access to the conservation area for construction, Davies said there was a low risk of that, but his company doesn’t want to give up the right of access in case they need it in the future.

“So, you’re telling us it is a low risk, but you’re not prepared to give us an assurance? In other words, you want Burnaby to take the risk, rather than your company,” McDade said. “If this route were approved and there was a major break in the pipeline in the tunnel, how would you repair it?”

Davies argued that McDade was venturing into "the space of speculation" with his line of questions.

“There are different things that could be done to maintain or repair the pipes,” the Trans Mountain official responded. “The point is that we don’t believe we will have to access through the surface. If we ever did we would work with the City of Burnaby to minimize any impacts on the surface and if there (were) any impacts they would be fully restored."

The Burnaby representatives posed questions about the risk of sinkholes, given that at least four sinkholes opened up — shutting down traffic — during recent construction of a line in region's Sky Train transportation system. A Trans Mountain representative admitted that the geography where the pipeline would go is the same, but said the route has been adjusted to accommodate for the risk of sinkholes.

Earlier this week, McDade accused Trans Mountain of routing their proposed pipeline through a protected area, then failing to perform an environmental assessment on the Brunette River Conservation Area.

How anybody in their right

How anybody in their right mind can come up with all the nonsense that Killer Morgan (sic) can just boggles the sentient mind...changing the course of the pipeline and trying to re-write the rules to suit themselves just seems to me the height of hubris...have they been learning from the BC Liberals?? One can only wonder. I have still not heard who the market for all this bitumen is? Not China, then who?? a little transparency would be lovely at this point before would put the BC coast at risk. Pipeline leaks, this is a fact. Who pays for the cleanup?? the people, despite the actions of pipeline companies. Their profits, OUR risk.

Thanks for reading, Paul.

Thanks for reading, Paul.