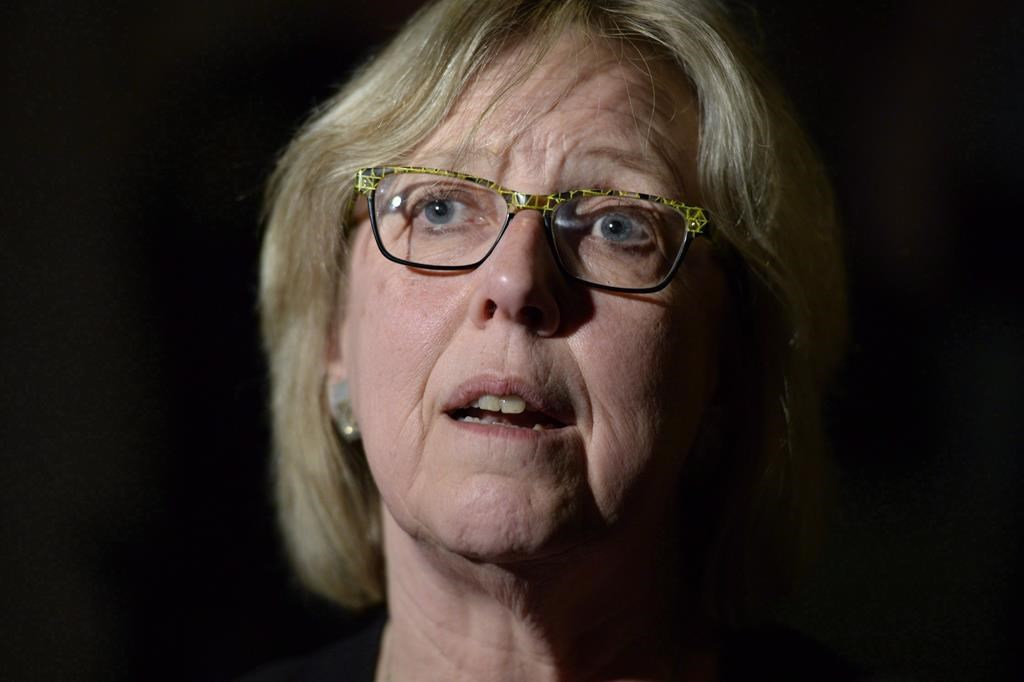 Green Party leader Elizabeth May speaks with reporters before question period in the House of Commons in Ottawa on Wednesday, May 10, 2017. File photo by The Canadian Press/Adrian Wyld
Previous story
Next story

Green Party Leader Elizabeth May says she asked for an independent investigation into allegations she harassed and verbally abused former staff in a bid to prove that she's done nothing wrong.

The Green party on Monday hired Toronto lawyer Sheila Block to undertake the investigation after three former staff told The Toronto Star and The Hill Times that May was a bully.

The allegations come from a former interim party executive director, former director of finance and a former organizer, who complained that at various times May yelled at them, wrote disparaging comments about them in emails, cursed at them in conference calls or belittled them in front of others.

May said she is absolutely not a bully and has in fact fought against bullying. She conceded she's not perfect and has bad days but, when she has lost her temper, she has apologized right away.

"These three individuals have created a caricature of me that bears no resemblance to reality," May said outside the House of Commons on Monday.

"I look forward to this (investigation) as a chance to tell someone independent what happened, let them judge for themselves and they'll tell you. I don't want to be standing in front of a microphone and talking about individuals and whether or not I remembered to bring them flowers."

May, who has led the Greens for 11 years, said while she feels confident she has the overwhelming support of the party — she was endorsed by 94 per cent of party members at the last leadership review in 2016 — she is aware there are some who don't like her or her leadership.

She suggested the complaints are coming from the disgruntled who want someone else to lead the party.

The investigation is expected to take two to four weeks and the findings will be made public.

May said Block will determine who will be interviewed and when but, in her only conversation with Block thus far, the lawyer indicated she would interview the complainants first before coming back to May.

May said the party didn't want to do an independent investigation, but she felt it's the only way to put the allegations to rest.

"The reality is I'm only human, I make mistakes and I apologize. This caricature of sort of a toxic, bully predator of people is so far removed from how I am in life to people that it just needs to be dealt with by someone other than me. You have to have an independent verification," she said.

But one of May's accusers questioned whether the investigation would be truly independent, given that the lawyer was hired by the Green party.

Vanessa Brustolin said the party also did not ask for input on who would perform the investigation.

"It has been said that the investigation report would be provided to the public, however, no confirmation that it would be provided in its entirely, as only the client (the Green party) is privy to the results," she said in an emailed to The Canadian Press.

Brustolin said she and the other complainants are calling for a mutually agreed upon investigator from a dedicated mediation firm.