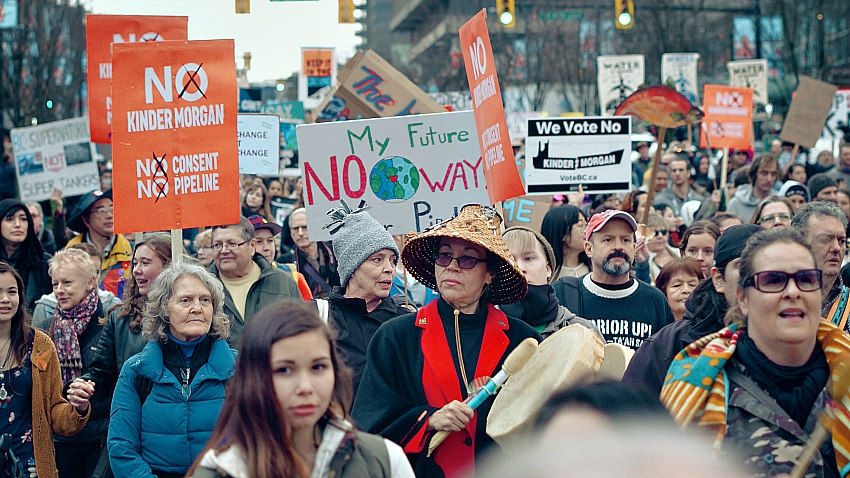 Prime Minister Justin Trudeau faced hecklers in Nanaimo. Premiers Rachel Notley and John Horgan are flinging indignant words back and forth between Edmonton and Victoria. Ottawa has been urged to step in and show who’s got the power.

What is going on here? All this over a pipeline that’s already been operating for 65 years?

Fortuitously, there’s a new documentary called Directly Affected to get you up to speed. It’s 75 minutes of bristling advocacy journalism, thoroughly researched and professionally presented. It doesn’t include the most recent events, but it sure does anticipate them.

The battle has been shaping up for years.

Kinder Morgan, the huge American company that bought the pipeline 13 years ago, wants to increase its capacity almost threefold by building a second pipe. Alberta needs it to get more of its oil to market. British Columbia's government, as well as those of Vancouver, Burnaby and others don’t want it expanded. Spills happen (the film documents four) and a sevenfold increase in tanker traffic is expected in Burrard Inlet, Vancouver Harbour and the Gulf Islands.

Worse: it’s not just regular crude oil that the pipe will move. The extra throughput will be diluted bitumen, oil from the tar sands with highly toxic chemicals added so that it’ll flow easily. That has some people scared.

The film has dramatic film of demonstrations, arrests, defiant speeches and protesters slapped with lawsuits. There are moving personal stories from Indigenous speakers, including a woman in Alberta who’ll bring out a tear or two. A Burnaby resident describes the oil from one pipeline rupture spraying all over her yard and street. For emphasis there’s film of a Kinder Morgan spill in the U.S. where oil is flowing like a small river down a suburban street.

You’ll understand what’s got people so riled up here, but the film stresses that this conflict is important way beyond British Columbia. Zack Embree, who co-directed, co-wrote and also narrates, among other functions, widens the context to the climate change emergency. A bigger pipe encourages more oil production in Alberta’s tar sands while we should be working, he says, to get off our addiction to fossil fuels.

Embree, who used to teach art to people struggling with addiction, makes parallels to modern society's dependency on oil and gas.

This isn’t an isolated project. You have to see all the others around the world together as the block they are to the coming age of clean energy. The hecklers in Nanaimo could have made the same point if they didn't get themselves tossed out.

Embree too is down on Trudeau, who spoke so well at the Paris Climate talks (remember “Canada is back”?) but then endorsed the pipeline expansion.The National Energy Board, which recommended it, also looks bad, out of touch, listening to very few voices, or only those "directly affected" after a watering down of its mandate under Stephen Harper’s former Conservative government. That’s all going to change soon. The Trudeau government has just announced plans to overhaul the environmental assessment process for major projects. The film makes policy analyses compelling, largely by brisk presentation and tight editing.

Trudeau should have to explain more. How can our climate change commitments survive his decision? A couple of energy analysts doubt they can. At the Nanaimo town hall meeting, which I listened to on the radio, he made an odd comment that I haven’t seen anybody pick up on. Asked why he is proposing controls on tanker traffic but only for the north coast, Trudeau said it’s because that’s where it’s needed. Huh? And it's not in the south?

In the film, I would have liked to hear more of Kinder Morgan’s arguments for the expansion. Instead, we only get a couple of empty statements from them.

And did you know that in a sense Kinder Morgan is something of an offspring of the notorious energy trader Enron? Richard Kinder, who was an Enron executive, took with him a division for the company, Enron Liquid Pipelines LLP, as part of his $20 million severance package from Enron. I think Embree makes too much of that, but it is interesting. As is the whole film.

It’s showing twice at the Mountain Film Festival in Vancouver (Sunday and next Friday) and there are plans to take it on tour through B.C., Ontario and Quebec in the spring.

I have to laugh (bitterly) at

I have to laugh (bitterly) at people reacting in horror to these frankly small and scattered and very infrequent spills of crude. Mostly city people, who are surrounded by it and it's much-more-volatile refined products every day of their lives. Where do think all the crude that ISN'T spilled ends up? Mostly in the vehicles that surround us. From which it spills, routinely, all day long. Unless it is burned and the gases ejected into your citified breathing air, along with all the fine particulates from diesel trucks and buses.

not just the North Hill Mall in Calgary - where the Sears gas station leaked for about 40 years straight before it was detected...but also under the whole neighbourhood across the Trans-Canada (16th ave) from it - over a hundred homes. The layer of gasoline is several inches thick and about 4-5 metres down. The basements are all monitored for petroleum vapours, as well as dozens of boreholes. It'll be decades more before soil bacteria finish eating it. Kids have grown up to adulthood over that spill.

It's not the extraction and transport of crude (which is very thick and hardly releases gas at all compared to gasoline, diesel and kerosene) that is the chemical exposure: it's the whole industry, the whole use of carbon fuels that's 99% of it.

Pipeline opposition is a gesture, a silly one; stop using carbon fuels if you want to accomplish something. That also means no products of any kind that require transport to you. (Tricky...)