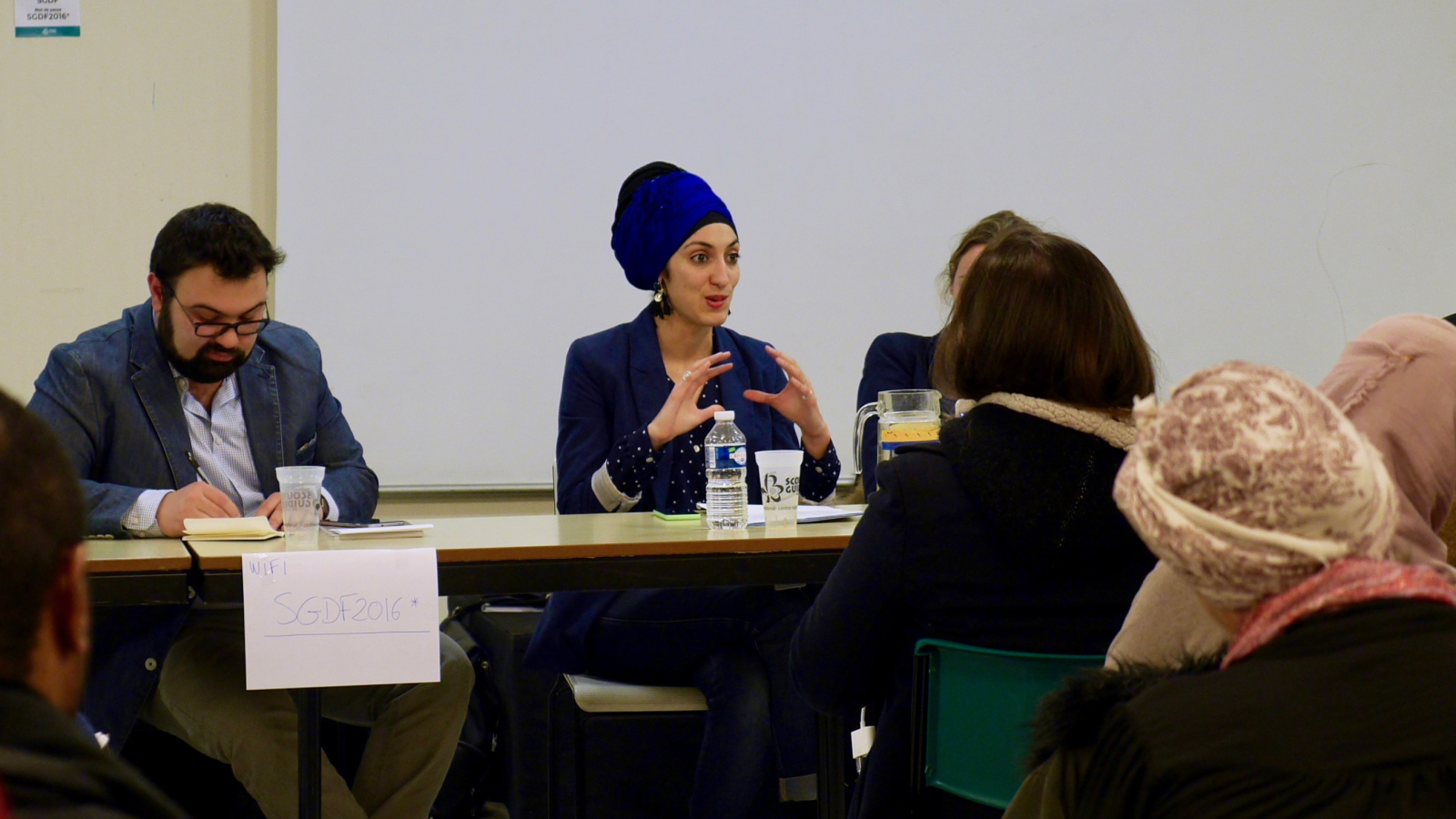 Attika Trabelsi, a member of the Muslim feminist group Lallab, speaks during a panel about discrimination against religious minorities in Paris on Dec.11, 2017. Photo by Clothilde Goujard

When Sarah Zouak decided to write her master's thesis on Muslim feminism, she remembers her professor telling her to choose one topic or the other because Islam and feminism are incompatible.

It was a confrontation Zouak would not forget.

A French woman of Moroccan origin and Muslim faith, Zouak is co-founder of a non-profit association augmenting the voice of Muslim women in France. The Paris-based organization is called Lallab, a mix of the Arabic word for 'Mrs.,' Lalla, and laboratory.

Zouak said in an interview that she and her sisters were raised by their parents to be “strong and independent.” But outside what she called the "family nest," she said felt like her "identities were not compatible.”

Chatting with National Observer in December, Zouak described watching TV shows while she grew up in France that portrayed Muslim women as submissive and oppressed, and hearing some politicians stigmatize them.

“We are constantly talking about ‘them’ but never giving them the chance to speak,” she said. “What we see on television shows and in debates is men speaking instead of us and explaining how to emancipate ourselves, how to live, if we have to right go to a beach with a burkini, if we can wear a headscarf in school.”

In France, the issue of visible religious signs often generates a lot of debate. The hijab has been banned in primary and high schools since 2004, but is permitted in universities. Visible religious signs are also forbidden for state employees, such as public hospital or municipal workers.

“We want to create an environment, resources and tools to favour the freedom of each Muslim woman to choose her identities and her life journey,” Devillaine said in an interview in Paris.

More recently, the burkini, a bathing suit that covers most of the body, made headlines when several French mayors banned it from their cities' beaches.

According to the French National Consultative Commission on Human Rights, while tolerance is improving in France, attitudes toward Muslim practices are still fairly hostile. In its 2016 report on the fight against racism, anti-Semitism and xenophobia, the commission reported that 58 per cent of 1,006 French people surveyed feel that wearing a hijab is not compatible with French social and cultural values — down from 80 per cent in 2014.

Zouak decided she would still write her thesis on feminist Muslims. She said her supervisor told her they would have to 'agree to disagree.' But the confrontation was too hurtful for Zouak to forget. Shortly afterward, she embarked on a trip to five countries with Muslim majorities to make a documentary about Muslim feminists. That was between October 2014 and June 2015.

Her friend Justine Devillaine accompanied her to Iran and Indonesia and helped with the documentary. They learned filming on the ground. Zouak also went to Morocco, Tunisia and Turkey. She felt elated to screen the first episode of the five-part documentary in cities in France.

“It was a powerful tool to reclaim my narration because I hadn’t been used to seeing myself in films, books, cartoons and dolls that existed in France,” said Zouak.

She and Devillaine decided the film was not enough, and in December 2015, established Lallab. Their association and online magazine aims gives a strong voice to and, advocate for Muslim women and their emancipation.

“We want to create an environment, resources and tools to favour the freedom of each Muslim woman to choose her identities and her life journey,” Devillaine said in an interview in Paris.

They hold regular meetings for Muslim women to help boost their confidence, public panel discussions and workshops on employment. On a Monday evening on Dec. 11, about 50 people gathered for a panel organized by Lallab and a human resources company about job discrimination based on religion in Paris.

The discussion was part of the city’s annual week against discrimination. It was supposed to take place in a municipal building, but a few days before the event, local politicians and staffers got cold feet. According to Zouak and the co-organizers, they thought the event did not fit the criteria of laïcité, France’s concept of secularism, because people would be talking about religious diversity.

The event was moved to a room in the Scouting and Guiding Association of France's building. The panel included Lallab member Attika Trabelsi, human resources professionals and the leader of an association on religious diversity called Coexister, who discussed practical career strategies for women wearing the veil, legal rights and dealing with the psychological toll of discrimination in the job market.

Participants took notes and shared stories. One asked for advice on dealing with co-workers who were “scared” of her headscarf, while another described how she had taken off her hijab before going to work everyday for 14 years before finally leaving the company.

“I now regret not fighting, maybe because I didn’t feel sure enough and was fragile,” she said to the audience and panel members.

According to French law, laïcité doesn’t apply to private companies, and courts must consider first and foremost individual freedom of religious belief in discrimination cases. However, companies may discriminate based on religious signs if they can prove consequences on hygiene, safety or the smooth operations of a company.

In 2016, new labor laws also allowed private companies to create their own internal rules on laïcité.

A recent French discrimination case made headlines when it reached the European Court of Justice. Asma Bougnaoui, a woman of Muslim faith, was fired from the computer engineering consulting firm Micropole Univers after the client she had recently started working for complained that her hijab was making “a certain number” of workers uncomfortable.

The European Court of Justice stated the company did not have the right to discriminate against its employees even if a client asked for it. However, it also stated that if the company had internal rules on neutrality, it was in its rights to dismiss employees who did not follow them.

“I have to say that it surprised all experts on this topic because we were absolutely convinced that the European Court of Justice would keep the attitude it had until now, which was based on defending individual liberties,” said Inès Dauverge, a human resources consultant with expertise on inclusion and diversity, who was spoke at the Paris panel.

“So it was the first time we were starting to hear at the European level, these issues of neutrality.”

The issue of job discrimination for Muslim women wearing hijab is particularly salient in Western continental Europe because it is custom to put a headshot in CVs in countries including France, Belgium, Germany and the Netherlands, according to Hajar El Jahidi, advocacy coordinator at the European Forum of Muslim Women.

“A lot of women will internalize that this is normal and will have avoidance strategies from, ‘I won’t apply to this job because I know I won’t get it anyway,’ to ‘I won’t pursue my education because what’s the point getting a diploma if I can’t work after’,” said El Jahidi.

While these types of prejudices against European Muslim women are not new, Zouak and Devillain believe they are attributable to the improvement of socio-economic conditions for children of former immigrants, the rise of populist discourse since 9/11, and recent terror attacks in Paris, Berlin and Brussels.

“It didn’t bother people that cleaning ladies were wearing headscarves,” said Devillain. “It started happening when women of the second generation (of immigrants) started to get jobs with more responsibilities in environment with power. And lately, a new argument has come up, that hijabs are a symbol of political Islam and radicalization.”

To counter these prejudices, Zouak, Devillain and their 250 trained volunteers at Lallab are working on education and awareness campaigns, and public speaking in conferences including at the French Senate and the United Nations headquarters in Geneva. Devillain and Zouak also hold workshops on prejudice based on gender, race and religion with students in middle and high schools.

Zouak sometimes feels discouraged. Lallab has been targeted on social media like Twitter in harassment and defamation campaigns. They say they often have to explain their stance on laïcité.

Despite France's complicated secular societal, and increased tension following several terror attacks, Zouak and Devillain are motivated by their project and team of volunteers.

“If we have all these difficulties even though (Lallab) has existed for only a year and a half, it’s clearly because we’re pushing where it’s hurting, what French society refuses to see the racism and sexism that French people are living in their own country,” said Zouak.