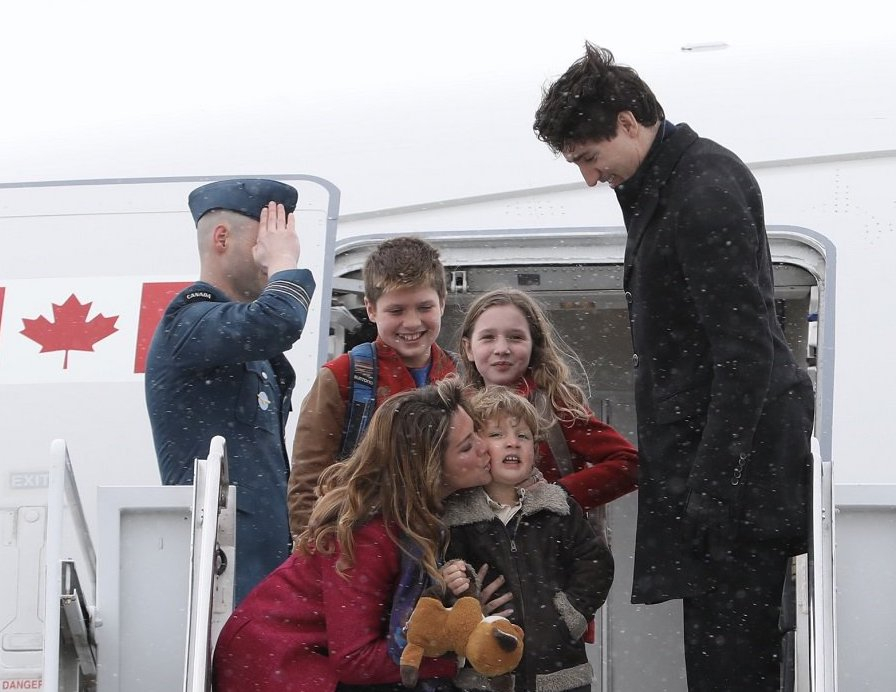 Prime Minister Justin Trudeau, Sophie Grégoire-Trudeau and their children board a plane in Ottawa headed on a trade mission in India on Feb. 16, 2018. PMO photo
Previous story
Next story

Prime Minister Justin Trudeau’s visit to India seems to be part of a game plan to garner Indo-Canadian votes, for I can find no other credible reason for the week-long visit.

More than a million Canadians are of Indian heritage. That is 3.6 per cent of the population. India is also Canada's second largest source of immigrants, approximately 40,000 in 2016.

In fairness to Trudeau, he is not the first Canadian politician to be tempted by the lure of Indo-Canadian votes. Previous and current prime ministers, provincial premiers and political party leaders have beaten the path to India for the same reason, often under the guise of trade missions. However, Canada-India trade of $7 billion is miniscule - worth only one week of Canada’s trade with the United States.

Trudeau’s predecessor, Stephen Harper, tried and failed to negotiate a Canada-India free trade agreement. In November 2010, his then international trade minister Peter Van Loan, launched free trade negotiations with much fanfare in New Delhi. His successor, Ed Fast, following Harper’s visit to India in 2012, and Bal Gosal, the then minister of state for sport who was born in India, held regular discussions with Indo-Canadian businesspeople in Vancouver, Toronto and Montreal, to provide updates on the talks. It was a blatant gesture to appease the Indo-Canadian vote. Ultimately, after almost a decade of discussions, nothing was delivered. Incidentally, there is no mention of Free Trade Agreement during Trudeau’s visit.

While India’s seven-per-cent growth rate looks impressive, there is a formidable array of obstacles - red tape, uncooperative bureaucracy and corruption among them - for Canadian businesses to negotiate or operate smoothly in India. In the World Bank’s country-by-country measure of the ease of Doing Business, India has ranked in 130th in the world for a decade. These rankings are based on a country’s regulations and performance in several areas, like starting a business, getting construction permits, electricity, contract enforcement, and so on.

Refuge from the cold

Given the large proportion of Sikhs in the Indo-Canadian population, a visit to Amritsar, a holy place for Sikhs and home to their Golden Temple, is essential. Prime Minister Jean Chrétien was the first Canadian prime minister to visit Amritsar and has been followed by all of his successors.

Former prime minister Paul Martin visited India in January 2005. There was work done on creating the G-20 Group, made up of developing and developed economies, to discuss global issues. India's then prime minister was invited to visit Canada but it did not transpire because Martin’s government was short-lived.

Reform Party leader Preston Manning was lured to visit Amritsar in 1998, at the urging of then newly-minted Indian-origin Sikh MP Gurmant Singh Grewal.

“Canada and India share a special bond, and are linked by tremendous people-to-people connections. The more than one million Canadians of India origin make the relationship between our two countries a truly special one,” according to Trudeau. Immigration, though not mentioned officially or openly, is another area of much interest to the Indo-Canadian community. As well as being Canada’s second -largest source of immigrants, in 2015 India was also the second-largest source of international students for Canadian universities and colleges.

However, not all Indo-Canadians are enthused by the Trudeau visit. While Sikhs in Canada are moved by his planned gesture of visiting their holy shrine, they are not enamoured by politicians’ visits to India, as a large number of Sikhs came as refugees following the 2004 Sikh riots in Delhi, in which thousands were killed, following Indira Gandhi’s assassination by her Sikh body guards. The assassination was in revenge for Gandhi’s order for the army to attack the Golden Temple and 17 other places of Sikh worship on a day of religious celebration resulting in death of countless innocent worshippers coming to the temple that day.

Hence, other than hoping to garner Indo-Canadian votes, there is not much to be gained by Trudeau’s India visit, except, of course, to provide refuge for the prime minister from Ottawa’s deep freeze!

Bhupinder S. Liddar, is a former Canadian diplomat. He can be contacted at [email protected]

Prime Minister to travel to India for state visit in February