Trump doubles down on lie he told Trudeau about trade deficit 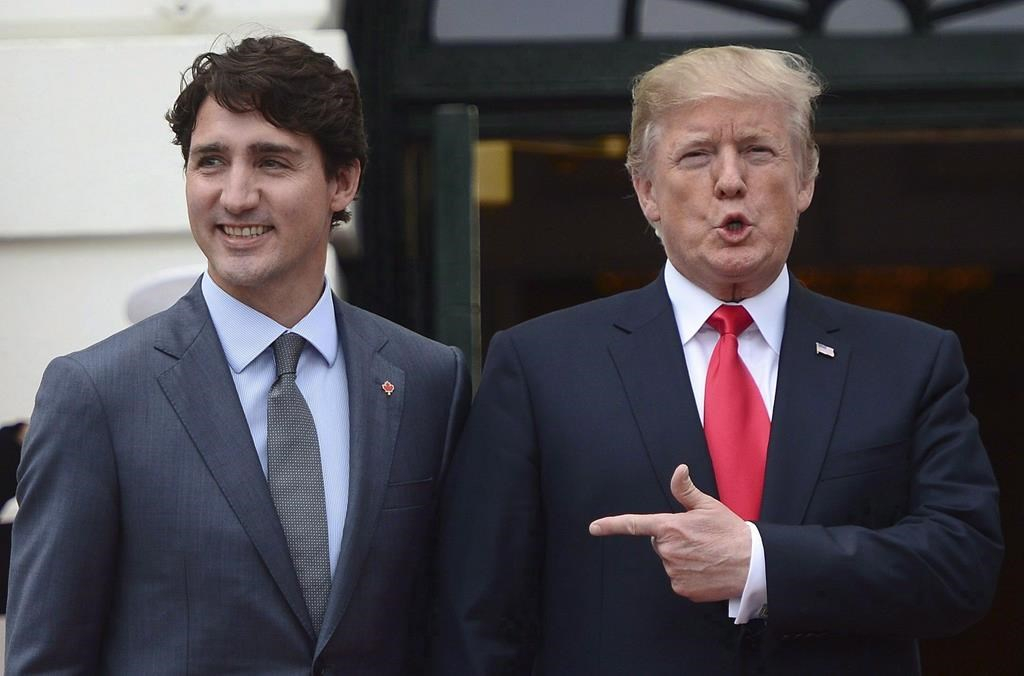 Prime Minister Justin Trudeau is greeted by U.S. President Donald Trump as he arrives at the White House in Washington, D.C., on October 11, 2017. File photo by The Canadian Press/Sean Kilpatrick
Previous story
Next story

U.S. President Donald Trump has doubled down on a lie he told Prime Minister Justin Trudeau about trade between Canada and the U.S.

The president's latest rant follows a boast he made in a fundraising speech in Missouri on Wednesday. He said in the speech that he made up facts about trade in a meeting with Prime Minister Justin Trudeau, according to a recording of the comments obtained by The Washington Post.

The newspaper said in a report posted on its website that Trump had insisted to Trudeau that the United States runs a trade deficit with its neighbour to the north without knowing whether or not that was the case.

Trump said on the recording that after Trudeau told him the U.S. does not have a trade deficit with Canada, he replied, "Wrong, Justin, you do," then added, "I didn't even know ... I had no idea."

The president said he then "sent one of our guys out" to check the prime minister's claim.

"Well, sir, you're actually right," Trump says in the recording. "We have no deficit but that doesn’t include energy and timber … and when you do, we lose $17 billion a year. It’s incredible."

Trump regularly bemoans a trade deficit with Canada and complained about it in late February by saying: "We lose a lot with Canada. People don't know it. Canada's very smooth. They have you believe that it's wonderful. And it is, for them. Not wonderful for us."

Trump's latest rant also wasn't the first time he mentioned his private meeting with Trudeau in a public speech.

On a Friday night last December, Trump told a partisan crowd in Florida about the meeting, making the same incorrect statements about the trade numbers.

Canadian diplomats and statisticians have assembled a special team that now analyzes Trump's false statements and compiles facts that government officials can use to counter the president's rants, National Observer reported this week.

On Thursday morning, Trump said in a tweet that his country has a trade deficit with Canada even though the facts say otherwise.

We do have a Trade Deficit with Canada, as we do with almost all countries (some of them massive). P.M. Justin Trudeau of Canada, a very good guy, doesn’t like saying that Canada has a Surplus vs. the U.S.(negotiating), but they do...they almost all do...and that’s how I know!

A different story is told in the recently released 2018 White House "Economic Report of the President" — an annual document prepared by Trump's own team which bears his signature and contradicts a number of trade statements and policies already articulated by him.

One example involves the supposed trade deficit with Canada. Trump keeps insisting it exists, but the document he signed states Canada is among the few countries in the world with whom the U.S. runs a surplus.

The document states: "The United States ran a trade surplus of $2.6 billion with Canada on a balance-of-payments basis."

Bruce Heyman, the U.S. ambassador to Canada until January, blasted Trump in a series of tweets early Thursday while also apologizing to Canada for Trump's reported comments.

"Lying to your friends only hurts the relationship," he wrote. "Canada has been there for us thru thick and thin. How can you casually damage this relationship? Shame on you!"

Heyman added that the president is "casually throwing Canada under the bus and this is just wrong."

What bothers Heyman most is that the president of his country keeps threatening to stifle trade with Canada and then shows up at meetings without having a grasp of the most basic details.

"What has incensed me is that the president is picking a fight with Canada," Heyman said in an interview. "Reckless. It's infuriating to me."

He contrasted this approach with the president he served: "(Obama) was highly briefed before entering a meeting with the prime minister. ... President Obama was a voracious consumer of information before making a decision. It's almost the exact opposite of what I'm seeing now."

Trump was roasted on some of the U.S. morning TV shows.

Trump's former NBC colleague and current nemesis Joe Scarborough said he's no fan of Trudeau, but had to admit the prime minister is right and Trump is wrong: "It is a funny story (Trump told). But it is a lie. ... He was lying last night — what a surprise — to his contributors.''

The story led the next show on MSNBC, where host Stephanie Ruhle said: ''That right there is humiliating for this country... This is pathetic. This is humiliating.''

The Washington Post ran an item headlined, "Why Trump’s admission that he made stuff up to Justin Trudeau is particularly bad." It expressed concern about what would happen if the president just decides to "wing it" in conversations with North Korea.

Reporters pressed his spokeswoman on Trump's behaviour at the daily White House briefing.

One journalist asked Sarah Sanders whether there are any other U.S. federal figures the president disavows. She was also asked about the president boasting about fibbing to a foreign leader.

"The president was accurate. Because there is a trade deficit. That was the point he was making — he didn't have to look at the specific figures," Sanders said.

"Because he knew there is a trade deficit."

Sanders later tweeted an explanation: the president was talking about trade in goods.

With services excluded from the calculation, the U.S. does run a deficit with Canada.

Editor's note: This article was updated at 5:45 p.m. on March 15 with additional quotes from Bruce Heyman, Sarah Sanders and other background information about media coverage of Trump's comments.

Diplomats and data geeks team up with 'rapid response' to Trump

He's a river of fake news to

He's a river of fake news to his people.