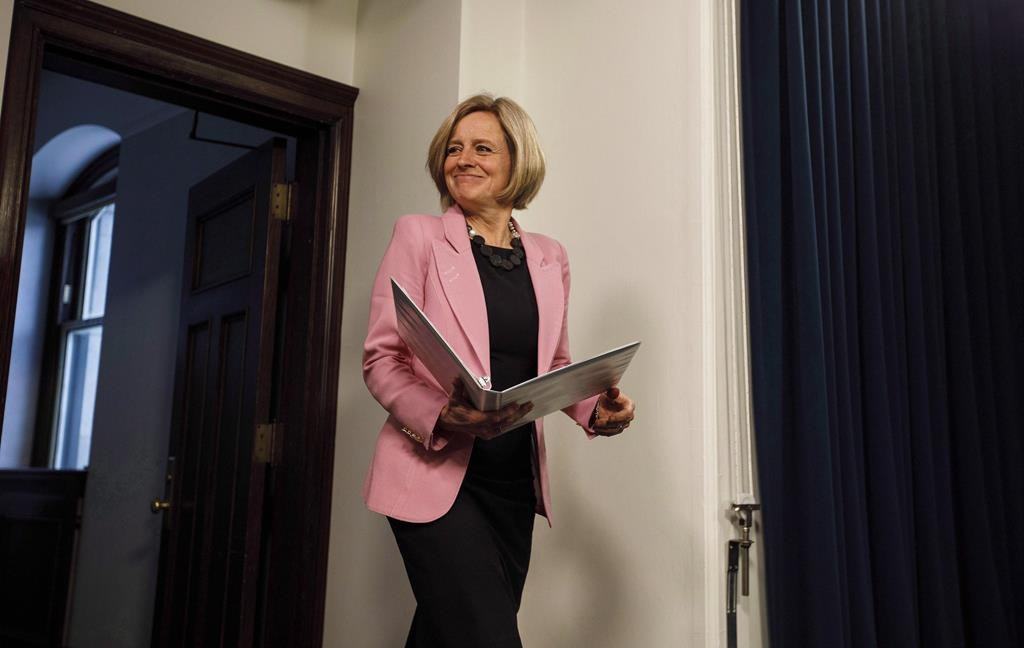 Alberta Premier Rachel Notley speaks to media before the Speech from the Throne, in Edmonton on Thursday, March 8, 2018. File photo by The Canadian Press/Jason Franson
Previous story
Next story

Notley says she will also take her message to a meeting of U.S. and Mexican governors and Canadian premiers in Scottsdale, Ariz., in early May.

Details of who the premier will meet with and when have not been released.

The premier said it's imperative to keep up pressure to get the Trans Mountain expansion completed so that more oil can move from Alberta to the coast.

"Economic leaders in this country must speak out with resolve and purpose," Notley said Tuesday during the public portion of a meeting with her NDP caucus.

She said leaders need to find a middle ground as they balance economic management with environmental stewardship.

"The voices on the extremes are getting a little loud," she said.

"Recently, (Inslee) said he opposed Trans Mountain," said Notley. "This from a state that welcomes hundreds of (oil) tankers a year from its ports in Alaska."

The British Columbia government has said it is concerned about the ramifications of oil spills from increased tanker traffic, and has been fighting Kinder Morgan's Trans Mountain project.

Inslee has said they share that concern over tanker spills.

The Trans Mountain line would triple the amount of oil flowing from Alberta to Burnaby, B.C.

Notley has said the pipeline expansion, which has been approved by Ottawa, is critical for Alberta to get a better price for oil in overseas markets.

Pipeline bottlenecks and increased transportation costs by rail are also reducing the price Alberta heavy oil can fetch on the North American market.

Trans Mountain has faced permit delays and multiple court challenges in B.C. Notley said her government will pass legislation this session to give her the authority to reduce the amount of oil flowing to B.C. if that province continues to stall the pipeline.

The Kinder Morgan TransMountain pipeline project is not in Canada's national interest. It is build to supply more crude oil to refineries located on the west coast of United States. It will replace light crude oil coming from Alaska, and other heavy crude from Mexico and Venezuela that used to supply those refineries. This way Alaska's oil producers will be able to ship their light crude oil to Asia and get a better price.
The port in Valdez, Alaska, can accommodate the very large crude container carrier (VLCCC) that can carry up to 2 million barrels. Tankers that can access Vancouver port facilities can carry a maximum of 550,000 barrels due to depth and other port restrictions. Kinder Morgan would lose money trying to export its crude to Asia. That's why the Alberta crude carried by the TransMountain pipeline will end up in the U.S. as it is right now.

Well, let's not let economic reality get in the way of pipedreams. Inside our fantasy bubbles, there is no such thing as fake news.