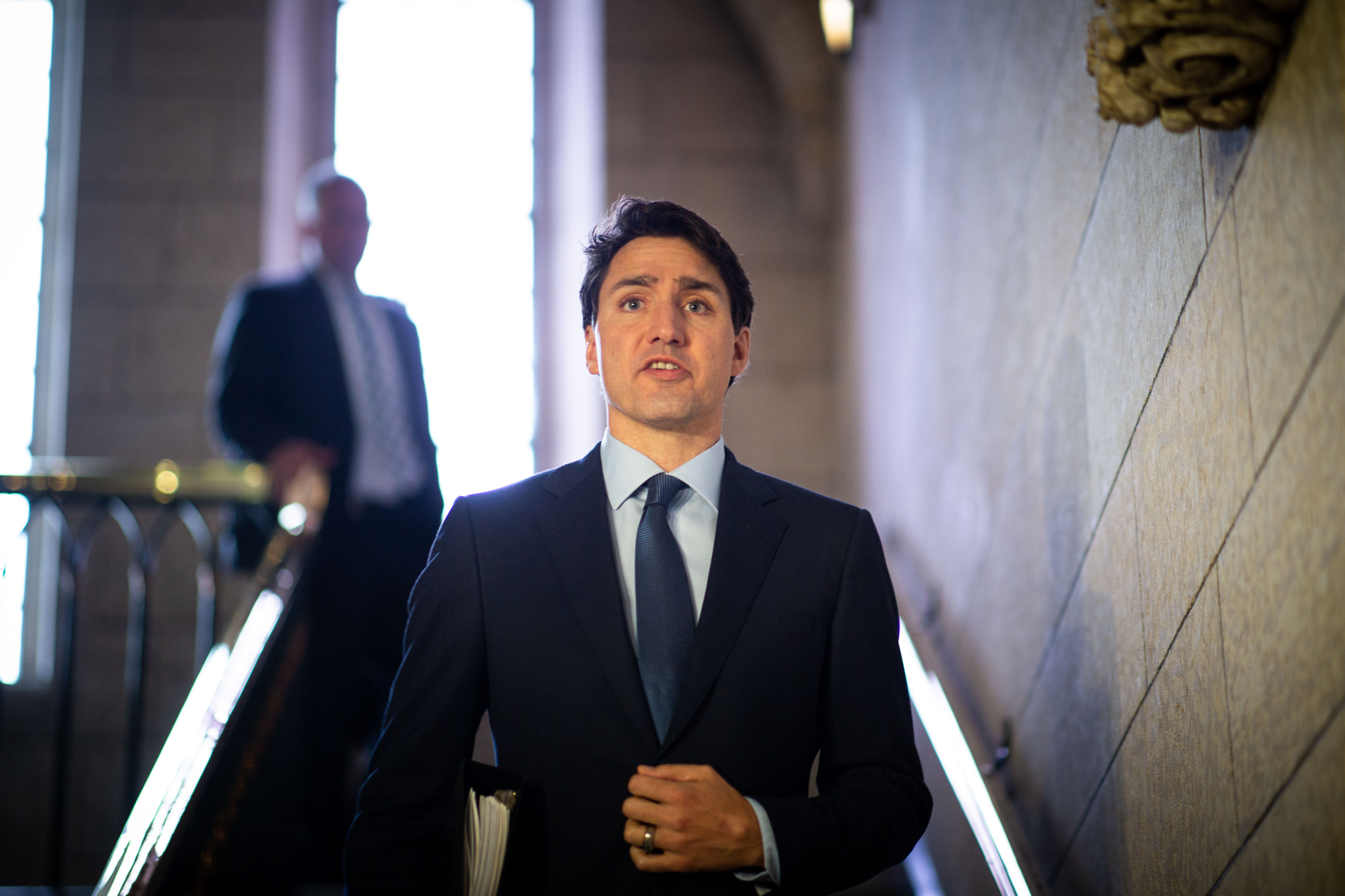 Prime Minister Justin Trudeau arrives at the House of Commons in Ottawa on April 25, 2018 for the daily question period. Photo by Alex Tétreault
Previous story
Next story

A lawyer for energy giant Kinder Morgan is warning that its Trans Mountain expansion project is facing "significant and unwarranted delay" following an unexpected legal letter filed Thursday in the wake of dramatic revelations reported by National Observer about the project's approval by the Trudeau government.

Maureen Killoran, a Canadian lawyer for the Texas-based company, drafted the warning in a letter filed Friday with the Federal Court of Appeal in response to a request filed on Thursday by the Tsleil-Waututh Nation in B.C..

The Tsleil-Waututh Nation is challenging Prime Minister Justin Trudeau's approval of the Kinder Morgan project at the Federal Court of Appeal, arguing that the government failed in its legal duty to consult First Nations prior to making its decision. In a letter sent to the court on Thursday, Scott Smith, a lawyer representing the Tsleil-Waututh Nation (TWN), wrote that two recent reports by National Observer confirm allegations it had previously raised that Trudeau's government acted in "bad faith" and is withholding documents that show what happened during its internal review.

As a result, Smith sent a letter to the court, giving notice that it intended to introduce a motion to compel the Trudeau government to cough up its secret records about the review of the pipeline project.

"It is TWN's position that such new evidence of bad faith and dishonorable conduct by Canada... would be directly relevant to the Court's consideration of whether Canada discharged its duty to consult TWN," Smith wrote in a letter to the court dated April 26.

The request from Smith is unusual, given that the case had already been heard last fall with a decision expected by the court this spring. But Smith argued in his letter that there was a legal precedent for the court to address the new allegations raised in reports from National Observer.

"In short, it would appear that this evidence, which was not disclosed and in regard to which TWN had no prior knowledge, corroborates TWN's allegation and suggest, in the words of the relevant media coverage, that internal federal government employees were instructed 'at least one month before the pipeline was approved, to give cabinet a legally-sound basis to say 'yes' to Trans Mountain... at a time when the government claimed it was still consulting in good faith with First Nations and had not yet come to a final decision on the pipeline," Smith wrote.

The court responded to Smith's letter promptly, asking the federal government and other stakeholders to provide their responses to the request by the end of the day on Friday.

In her response, Killoran said it was too late.

"Based on information contained in two articles published in the National Observer, TWN now seeks to gather additional evidence more than six months following the close of submissions," she wrote. "The relief sought by TWN will introduce significant and unwarranted delay."

Killoran also noted that the Tsleil-Waututh Nation had previously requested the release of documents through a motion that was rejected by the court in June 2017 "because (among other things) it was not persuaded that Canada withheld any information that was required to be produced. The Court also noted that TWN had an opportunity to test Canada's document production, and/or seek additional documents, on cross examination.

"Finally, there are no exceptional circumstances that justify reopening the evidentiary record for the consolidated proceedings," Killoran wrote. "On the contrary, it is highly unlikely that the motion will uncover additional producible evidence; even if such evidence exists (which is denied), it has no influence on the outcome of this case."

The federal government responded at the end of the day with a statement that didn't address any of the allegations raised in the National Observer reports directly. It also proposed a two-week process to deal with the motion and responses from the affected parties.

"Canada takes no position on whether TWN ought to be permitted to bring this motion at this late date, over six months after the hearing of these proceedings has concluded," wrote Jan Brongers, senior general counsel from the B.C. regional office of the federal government's Justice Department.

"That said, on the basis of the description of the proposed motion set out in the TWN Letter, Canada does not agree that it is the type of 'urgent motion, such as requests for emergency injunctive relief' that the Court contemplated would be governed by... the Procedural Order. Rather, the motion appears to constitute a further attempt by TWN to seek supplemental evidence."

"Canada notes that TWN’s proposed motion has the potential to delay adjudication of the consolidated proceedings, which, as noted above, have already been under reserve for a considerable time," Brongers wrote. "Accordingly, Canada submits that if TWN is permitted to bring this motion at this late date, it ought to be filed and served forthwith."

Not sure what KM's lawyer

Not sure what KM's lawyer strategy here. Seems the court would have a hard time making a judgement without considering the possibility the gov't withheld documents. My guess is they will consider this hidden evidence and it will sway the decision.

Good. This case is the most likely to succeed -- and when it does, result in full retreat by the gov't and their slimy oil overlords...

Why doesn't KM just bite the

Why doesn't KM just bite the bullet and take a new route south through Alberta then east through the states to Bellingham just a suggestion might have less resistance. Another route would be to go over the top north NWT and Yukon. AFN too many bands to get a consensus of Yes...Good Luck whichever path you choose in the future!

Yes, Kinder Morgan, your project faces "significant" delay, but "unwarranted"? This project should not even be a consideration in 2018!

So very much in the Trudeau

So very much in the Trudeau style; cook the books by whatever means to get the decision you want, as quickly as possible. This is how it works when you are running a catering service to the private sector, in this instance the oil deep state. And of course KM wins either way as they will sue us under NAFTA for a few billion for the pipeline that never gets built.

The subterfuge and chicanery

The subterfuge and chicanery on display by the Trudeau led government defies belief. This pipeline proposal has been shrouded in deceit and bully boy tactics on the part of the fossil fuel industry captured Trudeau government from day one. For the first time I am ashamed of my country for allowing this charade to go on and on. The significant evidence produced by the proponent, Kinder Morgan,to support its application for this pipeline was not cross examined to verify its accuracy, nor were significant so called expert submissions peer reviewed. The NEB was a kangaroo court worthy of the trial of The Knave of Hearts in Alice in Wonderland where the judge, The King of Hearts asks the jury to consider their verdict before any evidence is presented. The White Rabbit convinces the King to hear evidence. The Queen in her wisdom decides the sentence should come before the verdict. This is now the Trudeau way, but let us reassure him and his cobble of hypocrites, the people's verdict will be heard and we will pass judgement. Amen.

"Significant and unwarranted delay"? It's sounding more & more like KM's going to go the sue-them-under-NAFTA route.

If the government can produce

If the government can produce documents instructing other officials to prepare argument on why the project should NOT be approved, it'll be off the hook. If it can't, its goose is cooked.