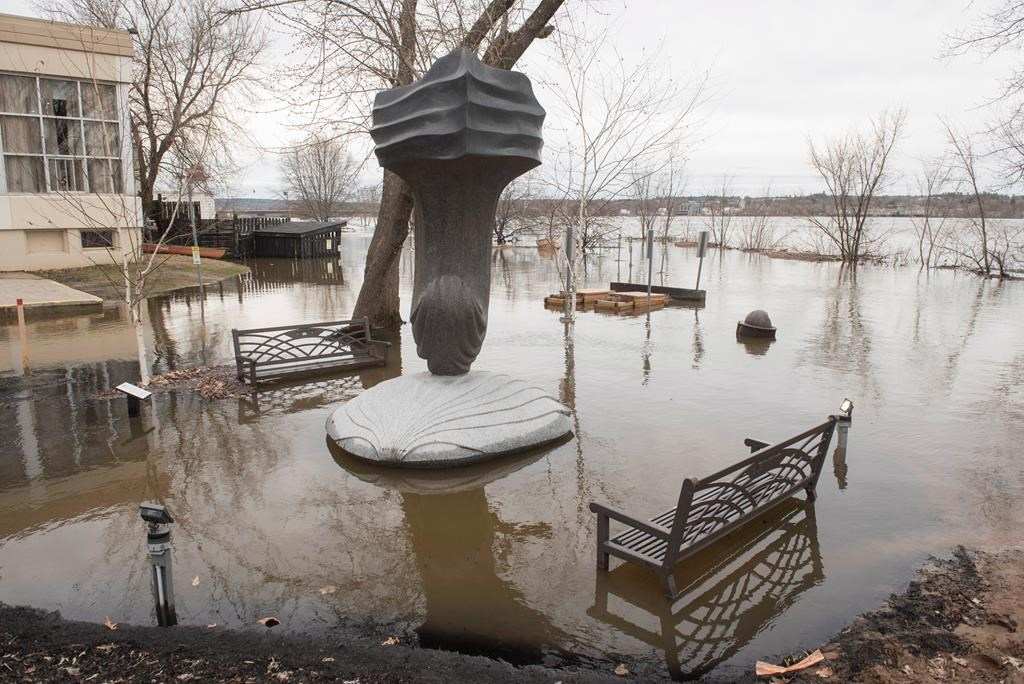 Crews packed sandbags around the New Brunswick legislature Friday as flood waters rose fast in the capital, submerging neighbourhoods along the St. John River and forcing a handful of residents from their homes.

Water reached the back of the storied Beaverbrook Art Gallery, submerged ramps to a downtown bridge, and impacted up to 100 homes.

Greg MacCallum, director of the provincial Emergency Measures Organization, said there is now flooding all along the St. John River and other waterways in the province.

"Everybody needs to be on the alert now," he said.

"The river is rising rapidly and we want people to take whatever measures they can and need to, to protect their homes and personal property and ensure their personal safety."

The sound of rushing water and sump pumps could be heard through many areas of Fredericton. Tow truck drivers were kept busy Friday moving cars from parking lots near the waterfront and a flooded parking garage.

A number of streets were barricaded because of flood waters.

"We want people to respect those barricades because going through them you don't know what's underneath the water," said Wayne Tallon, Fredericton's director of emergency measures.

"The roads might be giving way so we have absolutely no idea of the conditions of the roads. Also if the barricades are close to the river you could easily be swept out to the river because the currents are very very strong."

Even a number of streets and intersections away from the river have been closed because of water backing up through the storm sewers.

The water rose quickly, but some people like Jason Jeandron said it shouldn't have taken anyone by surprise.

"We knew it was coming. I saw a few cars in parking lots that are submerged and I think that's unfortunate but there was enough warning that people should have been moving their stuff from low ground," he said.

Tallon said the river was already 1.5 metres above the flood stage of 6.5 metres and quickly approaching levels reached during a significant flood 10 years ago.

In 2008, the river reached 8.36 metres, flooding homes, businesses and streets on both sides of the river.

Paul Young said he hadn't gotten water in his basement or that of his mother-in-law's home next door since 2008, but he had sump pumps running Friday. He said they had taken precautions and moved any belongings up off the basement floor.

Despite the inconvenience, Young said he has no plans to move.

"No, we're not moving. I don't care if it comes to 10 feet. We love it here on the side of the river. It's a great view in the summer. It's just that this time of the year gets a little hectic," he said.

The city's green space, walking trails and sports fields near the river were all flooded Friday.

While it was sunny and clear Friday, Tallon said the extent of the flooding would be determined by the amount of rain expected to fall over the weekend, and the amount of melting snow further north in the province that will come downstream.

"Now is the time to get prepared if you live in an area of the city that has experienced flooding in the past," Tallon said in a statement.

"It is also a good idea for all residents to run errands, check their emergency preparedness kit, gas up their cars, and have some cash money on hand in case of power outages resulting from flooded power equipment."

"We're well above flood level and that's well ahead of our forecast," he said. "This is more water than the average year and it's too early to say whether we'll hit 2008 levels, but everyone should be doing everything they can to stay informed."

Downey said the colder than average spring has resulted in more snow than they would typically have at this time of year.